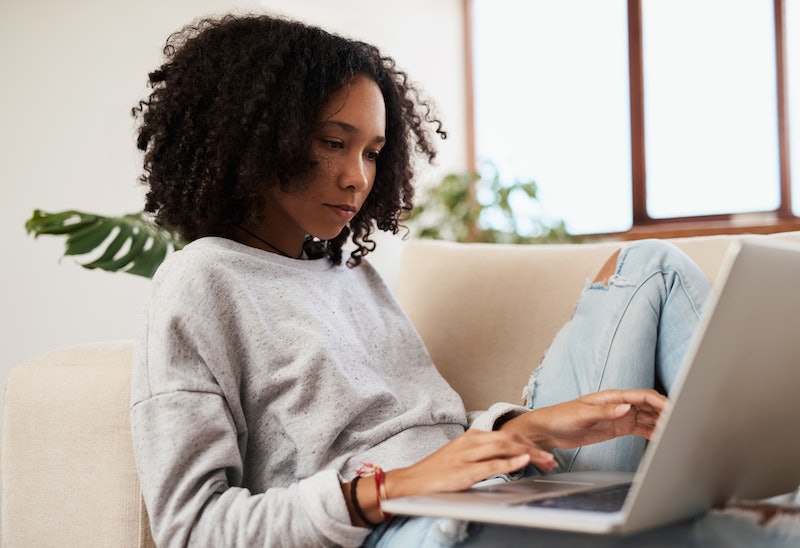 Mandy is a writer who’s always worked from home, so the pandemic didn’t change much about her day-to-day. But it did make her more attuned to what she does and doesn’t like about her job. "Quarantine made me realize what aspects of my career I liked — being creative — and what I wasn’t as fond of — not making as much money as I would like," says the 37-year-old. Without the distractions of pre-quarantine life, like industry events, Mandy found that spending so much time on the internet didn’t enable her most creative thinking. Plus, she didn't have an established savings account to rely on while the economy crumbled. Now, she's working on starting a business in the art world, which she hopes will be "a more lucrative venture."

For some, working from home during the pandemic was a welcome change of pace and space, despite the unfortunate circumstances. But for others, going remote only highlighted how their jobs were actually making them miserable. Quarantine helped some women realize they didn’t make enough money, or weren’t as passionate about their fields as they thought. Others simply didn’t have the support they needed to do their jobs effectively. The result? Women are changing their minds about their careers, thanks to COVID.

According to a survey of 2,000 professionals by WerkLabs, a behavioral science and analytics company, women are twice as likely as men to consider leaving their jobs in the next year, thanks to a lack of social connectedness or holistic support, and decreased levels of productivity. Separate analyses have shown that women, especially parents, are being forced to leave their jobs or fields due to a lack of childcare with schools shut down.

According to Angela T. Hall, J.D., Ph.D, associate director for graduate programs at the School of Human Resources and Labor Relations at Michigan State University, many workers were thrilled with the idea of working from home — at first. "When the pandemic brought this dream into reality, remote working turned out to be not as satisfying for many of those employees," she says. In informal conversations she’s had with workers over the past few months, she has found that the blurred lines between work and family life have proven deeply stressful, and the inability to have face-to-face interactions prevents many workers from growing the relationships they need to make career progress.

"The desire to be able to swoop in and help and just take care of the people closest to me is almost overwhelming."

With the economy projected to take up to 10 years to recover from the pandemic, many people will feel like a safety net is no longer a luxury, but a must-have. “We are going to see a lot of people feeling like they need a career change for their emotional and financial health,” Hall says. That desire to earn more money was amplified for Cara, 30, who says pursuing her passion in interior design and illustration has become less romantic and more stressful since the pandemic began. "I honestly have had sobbing sessions where I completely melt down because I am so scared about not being able to provide for myself and my family in the future," says Cara, whose freelance work is unsteady, and whose mother is battling a costly health issue. "The desire to be able to swoop in and help and just take care of the people closest to me is almost overwhelming."

These feelings have led Cara to prioritize substantially increasing her annual income, even if that means leaving her "dream job" behind. Though Cara is nervous about changing careers, she says she's considered a job in sales because a full-time job with benefits will reduce some of the stress she's feeling. She hopes to continue freelancing on the side if there's time.

Quinn, 31, was an elementary school teacher — a job she describes as part of her identity, and one she never would have considered giving up pre-pandemic — until she found out that her school, in New York, would be reopening come fall. "What people are asking teachers to do and sacrifice is beyond what I, personally, am willing to do," she says. “My health and family come first.” She adds that losing an income for her soon-to-be four-person household will be really difficult, and although she’ll be staying home with her newborn and 2-year-old daughter for the foreseeable future, she hopes to return to teaching once it’s safe again.

Meg, 29, on the other hand, has become disenchanted with her work as a fashion designer since March. "It's becoming harder to ignore the fact that my industry creates a massive amount of environmental waste," she tells Bustle. Having space from the positive aspects of office culture, like catered lunches and social breaks with her co-workers, has given Meg the ability to look at her work objectively. Although she's always had dreams of starting her own clothing line one day, she says the pandemic has inspired her to create a line of sustainable garments that would employ and spotlight underrepresented workers — something she felt her company did not prioritize.

"Career stress has become immobilizing," Meg says. "It feels financially irresponsible to leave a job in the middle of a pandemic, but it feels mentally irresponsible to continue working for a company that doesn't share my values." Though she hasn't left her job yet, she says she feels ready to do so.

Although Hall says it's more than reasonable to feel unfulfilled, confused, or even sad about your job right now, she says it’s not a great time to make a career change you weren't already planning on. "The current pandemic situation is very fluid, and we have had to experience a lot of change in a short period of time,” she says. “As we get in more predictable routines, you may have a different perspective," she says.

But for Meg, waiting to make that change feels impossible. “My parents do not support my decision to leave my job — they think I should wait for things to normalize — but I have to do what I feel is right for my new future.”