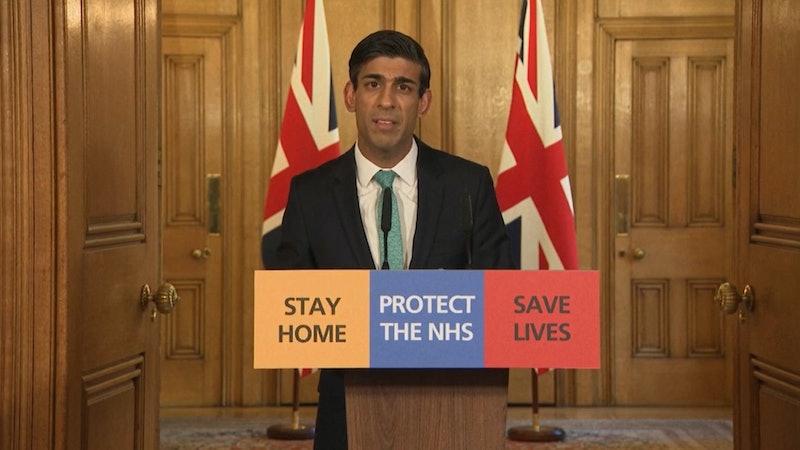 “You have not been forgotten,” stressed Chancellor of the Exchequer, Rishi Sunak, when he addressed the public on March 26. The chancellor spoke directly to the UK's self-employed and freelancing community — estimated to be around 4.5 million people — who’ve been impacted by the COVID-19 outbreak and the resulting UK lockdown.

During the announcement, Rishi Sunak introduced the Self-Employment Income Support Scheme (SEISS), a system that allows self-employed workers to apply for grants that cover a proportion of their average monthly profits to help them cope with the financial strain. But do all freelancers qualify for the government coronavirus grant and how does it work? The information can be tricky to digest, so here's a breakdown:

What Is The Self-Employment Income Support Scheme?

Initially, the UK Government pledged to pay freelancers “a taxable grant worth 80% of their profits up to a maximum of £2,500 per month” for April, May, and June of 2020. This money was paid directly into bank accounts in one lump sum.

After the first scheme closed on July 13, the government announced that self-employed individuals could claim a second grant under the Self-Employment Income Support Scheme. The system was brought in as an alternative to the extended furlough scheme. The second SEISS grant was worth 70% of your average monthly trading profits (capped at £6,570) and paid out in a single installment, covering three months.

After initially announcing that the third SEISS grant covering November 2020 to January 2021 would be worth 55% of trading profits (80% of profits for November 2020, to cover the second lockdown, with December 2020 and January 2021 worth 40%), the government announced that the third grant would be worth 80% of trading profits, in line with the extended furlough scheme.

SEISS has now been extended until April 21 to offer a fourth grant covering February to April 2021, but how much the grant will be worth is unclear. The Government website states: “We will set out further details, including the level of the fourth grant in due course.”

The scheme is open to freelancers and self-employed people who earn less than £50,000 per year, and where at least half of their income is derived solely from self-employment. According to the UK government website, to be accepted, you must have submitted your Income Tax Self Assessment tax return for 2018-19. So, those who filed in January will be eligible.

When you’re applying for the grant you’ll need to make it clear to HMRC that your business has been adversely affected by coronavirus on or after July. 14. You can apply for the second grant now over the government website. You can also check if you’re eligible so HMRC can give you a date to file your claim.

What Happens If I Only Went Freelance Recently & Don’t Have A 2019 Tax Return?

Unfortunately, if you're very new to the world of freelancing, with less than a year under your belt, you won't be eligible for a grant. Instead, you may have to rely on Universal Credit to help with living costs. In August, Chancellor Rishi Sunak said that the government would be increasing Universal Credit's standard allowance "to strengthen the safety net" by £1,000 a year, for the next 12 months. This means that "for a single Universal Credit claimant (aged 25 or over), the standard allowance will increase from £323.22 to about £406 per month," reports The Independent. Claim amounts will vary depending on your household and whether you have children.

I'm Self-Employed But Not Eligible For This Scheme, Is Universal Credit The Only Other Help Available?

Major banks are offering self-employed people a government-backed "business interruption loan" — although, some warn that these should be approached tentatively. If accepted, it offers loans, overdrafts, invoice and asset finance of up to £5 million for up to six years. Money Saving Expert advises that "the Government could also give you a 'business interruption payment' to cover the first 12 months of interest and fees on the loan."

Self-employed tax-payers have also been granted an extension on paying their upcoming self-assessment payment. The original payment deadline, July 31. 2020, has been extended to 31 January 2021.

Am I Eligible If I’m A Limited Company?

Limited companies aren't covered by the scheme. Many of these businesses earn more than £50,000, exceeding the eligible income required to participate. In his speech, the chancellor said “those who pay themselves a salary and dividends through their own company” are not covered by the self-employed support scheme, but can apply to have their salary covered by the Coronavirus Job Retention Scheme.

If I Receive The Grant, Do I Have To Pay It Back?

The grants will be subject to income tax and National Insurance contributions, much like your usual income , and they will need to be declared on tax returns by January 2022, per BBC News. You will not have to pay back the grant money, unless you choose to voluntarily, or you make a claim in error, in which case you may be subject to a penalty if you don’t pay it back.