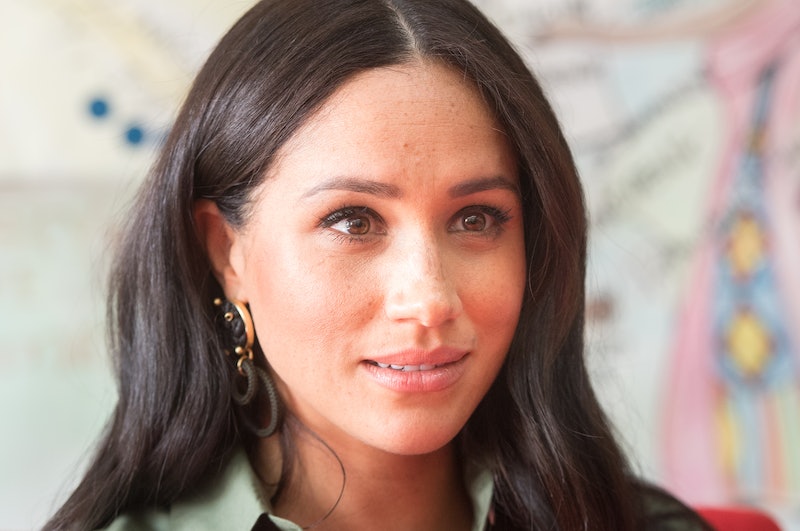 2020 was a year of major change for Prince Harry and Meghan Markle, not least in part due to their decision to relocate their family and step back from their roles as senior members of the royal family. Playing out in the background of all this was Meghan's lawsuit against the Mail on Sunday. The pandemic turned the court proceedings into a virtual affair, a following a request for a summary judgement, Meghan finally won her privacy case against the newspaper in February 2021. The subject and the way the press has treated will be sure to come up in her landmark interview with Oprah Winfrey, which is due to be broadcast in the U.S. on March 7 (and in the UK on March 8). Here's everything you need to know about Meghan's privacy lawsuit.

Why Did Meghan Sue The Mail On Sunday?

The lawsuit involved both the Mail on Sunday and its publisher, Associated Newspapers. The lawsuit revolved around a handwritten letter she sent to her estranged father, Thomas Markle, which the The Mail on Sunday published in early 2019, per the Guardian.

In a statement released at the time, Prince Harry said the contents of the heartfelt letter "were published unlawfully in an intentionally destructive manner to manipulate [readers] ... they purposely misled you by strategically omitting select paragraphs, specific sentences, and even singular words to mask the lies they had perpetuated for over a year."

The duchess also hit back against a number of "false" reports published by the newspaper. The Mail on Sunday reported Meghan had failed to ask after her father's health or financially help him, which her legal team stated was untrue and could prove that she has a "long history of looking after her father’s welfare."

Other articles accused of publishing incorrect information included stories detailing Meghan's "gang-scarred" childhood home, how taxpayers had funded the renovation of Frogmore Cottage, and alleging the community kitchen she wrote a cookbook with had links to terrorism.

Represented by law firm Schillings, Meghan filed a High Court claim alleging misuse of private information, infringement of copyright, and breach of the Data Protection Act 2018, per the Evening Standard.

What Did Prince Harry Say About The Lawsuit?

At the time the lawsuit was filed, Prince Harry said his wife had "become one of the latest victims of a British tabloid press that wages campaigns against individuals with no thought to the consequences — a ruthless campaign that has escalated over the past year." He explained that doing nothing "would be contrary to everything [the couple] believe in and that the legal action had "been many months in the making."

He continued: "There comes a point when the only thing to do is to stand up to this behaviour, because it destroys people and destroys lives. Put simply, it is bullying, which scares and silences people ... Though this action may not be the safe one, it is the right one."

In his statement, Prince Harry detailed how the lawsuit "hinges on one incident in a long and disturbing pattern of behaviour by British tabloid media."

What Was The Tabloid's Defence?

As the BBC reports, the tabloid's strategy was to argue there was "huge and legitimate public interest" in publishing the letter. It says in a 44-page legal filing that the royal family "rely on publicity about themselves and their lives in order to maintain the privileged positions they hold and promote themselves ... [Meghan] did not have a reasonable expectation of privacy that the contents of the letter were private and would remain so."

An initial statement from the paper, per iNews, read: “The Mail on Sunday stands by the story it published and will be defending this case vigorously. Specifically, we categorically deny that the Duchess’s letter was edited in any way that changed its meaning.”

Defence documents stated that the People interview with Meghan's anonymous friends acknowledged the existence of the letter, arguing it was therefore no longer classed as confidential.

“Mr Markle was also entitled publicly to correct the false and damaging (to him) information that had been given about his conduct in the People interview, and to have as much of the letter and its contents published as was necessary for that purpose," state court papers.

During a remote hearing in January 2021, Mr Markle said in a witness statement he had wanted the letter published to "set the record straight" about his relationship with his daughter - a claim one of Meghan's lawyers described as "ridiculous".

Associated Newspapers also alleged that claims, reported by People, saying Meghan was contacting her father "up to the night before" her May 19 wedding, were untrue. They stated that the last contact Thomas received from Meghan was a text on May 17. That text allegedly told Thomas to stop speaking to the media, "accusing him of causing hurt to his daughter," and is said to have been signed from "M and H."

The defence even claimed that Meghan's "elaborate handwriting" is a sign the Duchess knew it would be seen by people other than her father. It also says the published data was not sensitive, per the BBC, and that the published portions of the letter "accurately conveyed the tone, content, and meaning."

At one point, Omid Scobie and Carolyn Durand's biography of the Sussexes Finding Freedom was dragged into court, too. Per Town & Country, Associated Newspapers argued that Meghan co-operated with the authors which they said was relevant to determine her expectation of privacy. "It is difficult to see how she can complain that the letter should not have been published because 'it contained the Claimant’s deepest and most private thoughts and feelings.”

So, What Was The Ruling?

After two years of pursing litigation, Lord Justice Warby granted Meghan a "summary judgment" (meaning that part of the case was resolved without a trial) in February 2021, per NBC news.

In the judgment, Justice Warby ruled that the publication of the letter was "manifestly excessive and hence unlawful."

"She enjoyed a reasonable expectation that the contents would remain private and not be published to the world at large by a national newspaper," Justice Warby wrote. "The defendant's conduct in publishing the contents of the letter was a misuse of her private information."

He added: "There is no prospect that a different judgment would be reached after a trial."

At a remote hearing in March, he refused permission for the publisher to appeal the ruling. He also granted Meghan an interim £450,000 payment towards legal costs, though her bill was reported to be £1.5m, which the publisher's defence team called "extraordinary".

In light of the ruling, Meghan released a statement, saying:

"I am grateful to the courts for holding Associated Newspapers and The Mail on Sunday to account for their illegal and dehumanising practices.

"These tactics (and those of their sister publications MailOnline and the Daily Mail) are not new; in fact, they've been going on for far too long without consequence. For these outlets, it's a game. For me and so many others, it's real life, real relationships, and very real sadness. The damage they have done and continue to do runs deep."

"We all lose when misinformation sells more than truth, when moral exploitation sells more than decency, and when companies create their business model to profit from people's pain. But for today, with this comprehensive win on both privacy and copyright, we have all won."

The High Court later ruled that Mail on Sunday must publish a statement about Meghan's victory on the front page of the newspaper, a request Meghan's legal team said would "act as a deterrent to future infringers".

Per the Guardian, the paper must also publish a notice on page three stating that it "infringed" the Duchess of Sussex's copyright in its publication of excerpts of the letter.

In the same hearing, Lord Justice Warby granted Meghan a declaration that the Mail on Sunday's publisher, Associated Newspapers had “misused her private information and infringed her copyright.”

In the March hearing, Justice Warby said he saw no grounds to overturn his judgment, but said the publisher had the right to take its application to the Court of Appeal, which Associated Newspapers' legal team have said they will do.

Meanwhile, the duchess' lawyers have asked the judge to order the publisher to hand over any and all copies of the letter, including electronic copies of it or any notes made about it.

Per BBC News, Justice Warby said he would make "a limited order for publication and dissemination" of the result of the summary judgement application, but that it would be "considerably more limited than the order sought." He also said he would not make an order for "delivery up or destruction" of any copies of the duchess' letter to her father "at this stage".

On May 5, 2021, the Duchess of Sussex won the copyright claim against Mail on Sunday. Markle had drafted the personal letter on her iPhone and worked on it for hours, the high court heard, before transcribing it by hand.

Markle shared the drafted letter with Prince Harry and a senior Kensington Palace aide, Jason Knauf, which is where counsel for the Mail on Sunday alleged Knauf could have joint copyright. However, the Duchess’s counsel, Ian Mill QC, said that the publisher “did not have the material it needed” to successfully defend its argument, and Knauf “unequivocally denied” having helped writing the letter, per the Guardian. Lord Justice Warby therefore granted summary judgment in Meghan’s favour in a remote hearing for the copyright claim.

ANL is seeking an appeal on the privacy claim, and the question of damages will be addressed at future hearings.