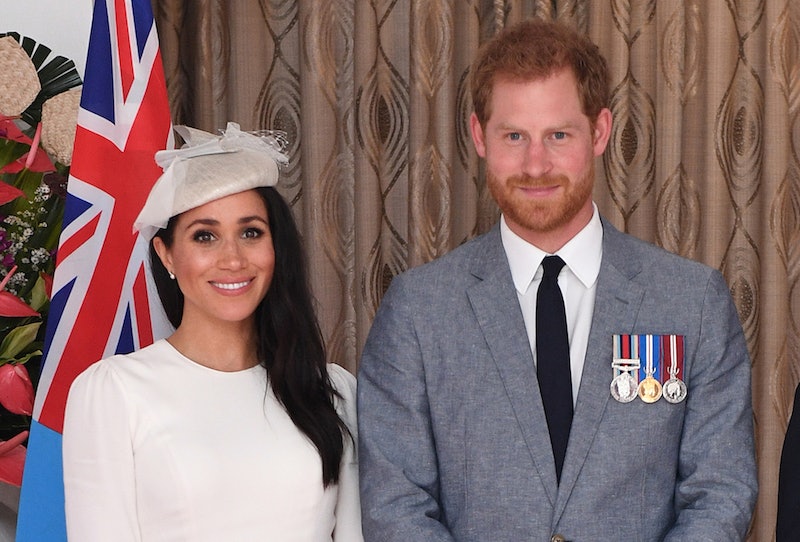 In a statement published on their official website on Tuesday, Oct. 1, Prince Harry and Meghan Markle announced a lawsuit against British tabloid, The Mail on Sunday, and its parent company Associated Newspapers. Prince Harry cited alleged “relentless propaganda” and “false and malicious” media harassment against Meghan since the couple began dating in 2016 as part of the reason for the for alleged invasion of privacy lawsuit. The Duke and Duchess of Sussex publicly stated that they've had enough of the alleged harassment and "misuse of private information" and "infringement of copyright and breach of the Data Protection Act 018," as per the Prince Harry's statement. (Bustle reached out to Kensington Palace and Buckingham Palace for comment, but have not yet heard back.)

A The Mail on Sunday spokesperson issued the following statement to Bustle on Oct. 1 regarding the lawsuit: "The Mail on Sunday stands by the story it published and will be defending this case vigorously. Specifically, we categorically deny that the Duchess’s letter was edited in any way that changed its meaning."

Prince Harry's statement publicly addresses The Mail on Sunday's alleged “intrusive and unlawful publication" of a private letter written by the Duchess of Sussex. A spokesperson for Schillings, the firm representing the Duke of Sussex, states on the Sussex royal website that this is a part of an alleged "campaign by this media group to publish false and deliberately derogatory stories about her [Markle], as well as her husband." The letter being referenced was published in February 2019, which the Mail claimed to be by Meghan and addressed to her estranged father, Thomas Markle, after he had missed her wedding.

Harry's statement about the lawsuit claimed that the publication of the letters allegedly "purposely misled” readers “by strategically omitting select paragraphs, specific sentences, and even singular words to mask the lies” the media allegedly “had perpetuated for over a year.” The lawsuit is one that has been "many months in the making," according to the statement. The case will be privately funded by the Duke and Duchess of Sussex, with the statement adding that any such proceeds from damages will be donated to “an anti-bullying charity.”

Harry’s statement also paralleled his wife’s treatment to that of his mother, Princess Diana, who died in a car crash in August 1997 while being pursued by paparazzi. His statement said that his “deepest fear is history repeating itself.” The statement continued, “I’ve seen what happens when someone I love is commoditised to the point that they are no longer treated or seen as a real person. I lost my mother and now I watch my wife falling victim to the same powerful forces.”

The legal action comes on the heels of Harry and Meghan’s final leg of their 10-day tour of South Africa with son Archie, whom they welcomed on May 6. In his statement, Harry even called out the “double standards” of press coverage of the tour, which read, in part, “The positive coverage of the past week from these same publications exposes the double standards of this specific press pack that has vilified her almost daily for the past nine months… She is the same woman she was a year ago on our wedding day, just as she is the same woman you’ve seen on this Africa tour.”

The lawsuit isn’t the first time Harry has called out British press for its treatment of Meghan. In November 2016, while the two were dating, Harry issued an unprecedented statement through Kensington Palace that admonished the “abuse and harassment” endured by his then-girlfriend rooted in “racial undertones” due to Meghan’s mixed-race background. “Prince Harry is worried about Ms. Markle’s safety and is deeply disappointed that he has not been able to protect her," the 2016 statement read. "It is not right that a few months into a relationship with him that Ms. Markle should be subjected to such a storm."

The Duke of Sussex's Oct. 1 statement about the lawsuit concluded with gratitude for the public for their support. "Although it may not seem like it, we really need it," Prince Harry's statement concluded, along with his thanks to fans.