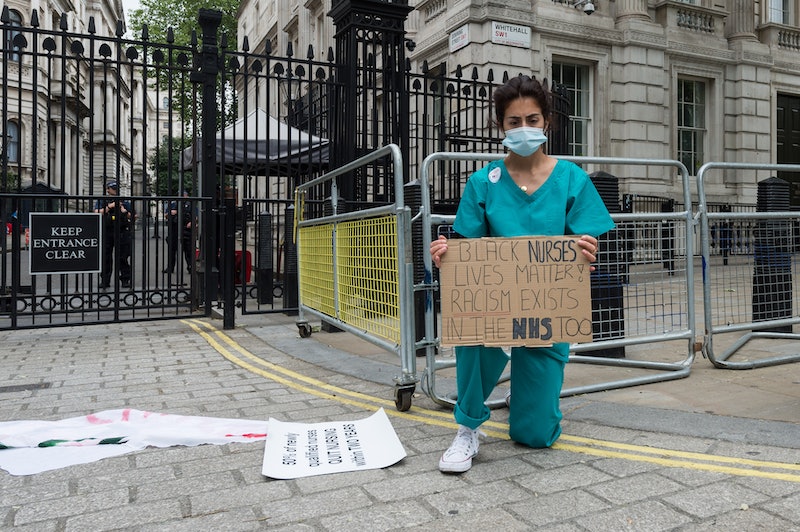 The Equality and Human Rights Commission has announced they will be conducting an inquiry into the impact of coronavirus on BAME people, and the light the outbreak has shone on "long-standing, structural race inequality in Britain." It comes after Public Health England's 'Disparities In The Risk & Outcomes Of COVID-19' report was released earlier this week, which confirmed that Black, Asian and other ethnic minority groups are at a higher risk of dying from coronavirus, but did not publish any explanation as to why this might be.

The report showed that British people of Bangladeshi heritage were twice as likely to die from coronavirus than white people. It also found that British people of Chinese, Indian, Pakistani, or other Asian heritage, as well as British people of Caribbean and "other black" heritage had between a 10% and 50% higher risk of death from COVID-19 when compared to white British people. The report was criticised for failing to explain why the risk is higher for these groups, and what the government plans to do to protect people from BAME communities during this time. It was described as a "missed opportunity" by the council chair of the BMA, the doctors' trade union, for example.

The Equality and Human Rights Commission announced via Twitter that it would be carrying out an in-depth analysis of the health inequalities that have been highlighted by the coronavirus outbreak. The tweet read: "Today we have launched an inquiry into the impact of coronavirus on ethnic minorities. The pandemic has shone a light on long-standing, structural race inequality in Britain, and raised serious issues that have yet to be fully answered."

David Isaac, the chairman of the EHRC, said of the inquiry: “Now is a once-in-a-generation opportunity to tackle long-standing entrenched racial inequalities."

He added: “We intend to use our statutory powers to address the loss of lives and livelihoods of people from different ethnic minorities. Only by taking focused action to tackle race inequality across Britain will we become a fair country... This inquiry is part of our long-term strategic approach to tackle the structural inequalities that the coronavirus pandemic has laid bare."

In addition to the EHRC's analysis, the Government Equalities Office has announced they will be conducting a review of the government's response to inequalities in COVID-19 infection. It will be led by Minister For Equalities Kemi Badenoch, and will look into how the government have been working to "directly lessen disparities in infection and death rates of COVID-19," and will also analyse the ways the data for the PHE report was collected, and potentially commission more to gain a clearer picture of the scale of the disparities.

The review will ultimately try to reach more of an understanding about the current situation and what is happening, so that the work that needs doing to lessen these disparities can be undertaken.

“This government is rightly taking seriously the initial findings from the PHE report published earlier this week," said Minister for Equalities, Kemi Badenoch. "However, it is also clear that much more needs to be done to understand the key drivers of the disparities identified and the relationships between the different risk factors."

“That is why I am now taking this work forward, which will enable us to make a real difference to people’s lives and protect our communities from the impact of the coronavirus.”

Both the EHRC and the Government Equalities Office's reviews come after it was revealed that PHE's 'Disparities In The Risk & Outcomes Of COVID-19' was not led by Black doctor Prof Kevin Fenton, who the government initially claimed would be in charge.

Fenton explained that he had "contributed" to the report, but that it was led and written by Prof John Newton, who is head of the UK's testing programme. PHE's original announcement on May 4 stated that Fenton would "lead the review, supported by a wide group including [former UK equality watchdog chief] Trevor Phillips."

The BBC has revealed this was in fact not the case. Fenton is thought to have led the 'community engagement' portion of the review, which was revealed to have been redacted from the final report. This was said to have featured responses from over 1,000 organisations and individuals. These responses are said to have included suggestions that discrimination and a poorer quality of life played a part in the increased risk of the virus to those from BAME groups.

Speaking of his findings from this section in May, Fenton said: "The issues of racism, trust, discrimination and stigma are certainly coming up loud and clear from so many of our [community] stakeholders and partners."

Understandably, there has been disappointment and frustration at the fact that Fenton did not have the involvement that it was initially suggested he would. Social Justice Campaigner Patrick Vernon, for example, said the black community felt "misled" by Fenton's involvement and that "trust had been lost."

It is unclear whether any of the findings about the causes of the heightened risk to BAME groups from COVID-19 will be revealed in coming weeks or months, but a statement from PHE suggested they may do. The statement read:

"Professor Fenton has been engaging with a significant number of individuals and organisations within the BAME community over the past couple of months, to hear their views, concerns and ideas about the impact of the virus on their communities."

"The valuable insight he has gathered will inform the important work the Equalities Minister Kemi Badenoch is now taking forward."

More like this
Gen Z Are Twice As Likely To Identify As Queer, According To New Data
By Sam Ramsden
What The UK Blocking Scotland’s Gender Recognition Bill Means
By Sam Ramsden
This Is When Netflix Is Going To Start Charging You For Sharing Passwords
By Darshita Goyal
Watch Jacinda Arden’s Devastatingly Honest Resignation Speech
By Sam Ramsden
Get The Very Best Of Bustle/UK
Sign up for Bustle UK's twice-weekly newsletter, featuring the latest must-watch TV, moving personal stories, and expert advice on the hottest viral buys.