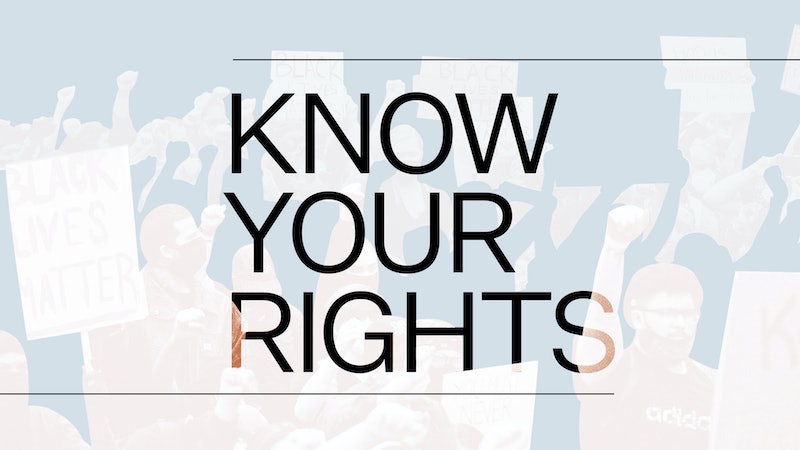 In the weeks and months after George Floyd’s death in May 2020, Americans joined in mass protests about anti-Black violence, with potentially upwards of 26 million people participating. Nearly a year later, a former Minneapolis police officer, Derek Chauvin, is on trial for second- and third-degree murder of Floyd, as well as manslaughter. On April 11, roughly 10 miles from the courthouse where his trial is ongoing, a 20-year-old Black man, Daunte Wright, was killed in an officer-involved shooting during a traffic stop. According to CNN, hundreds of people began protesting on Sunday after his death.

Early Monday morning, the mayor of the Minneapolis suburb, called Brooklyn Center, released a video statement, saying “The officer shooting in Brooklyn Center today is tragic. We are asking the protesters to continue to be peaceful and that peaceful protesters are not dealt with force.”

Before hitting the streets yourself, refresh your memory on your constitutional rights to protest, as well as what to do if you think those have been violated. You can save “Bustle's Guide To Protesting: Know Your Rights,” to your phone to reference if you’re on the ground. It compiles information from the American Civil Liberties Union and the National Immigration Law Center. (Kristina Podnar, a digital policy consultant, recommends turning your phone on airplane mode, so you and your device can’t be linked to a protest if things turn south).

Your Right To Attend A Protest

The First Amendment gives you the right to peacefully assemble and express your views, whether you’re a citizen, resident, or visitor. Public spaces are safest, such as streets, sidewalks, parks, and town squares. (Owners of private property can establish their own rules around free expression and assembly.) If your protest doesn’t have a permit, the police may ask you to move to the sidewalk for safety or to accommodate traffic. Curfews overrule your right to protest, so check to see if your city has set one before heading out.

Freedom of speech doesn’t cover violence or property destruction. If police think there’s a threat to public safety, they can order protesters to disperse. Legally, they have to do this and provide an exit path before making any arrests.

Your Right To Take Photos And Videos

When you’re in a public space, you have the right to photograph police officers, as long as you're not interfering with their job. Officers cannot confiscate your camera, demand to view content, or delete anything without a search warrant. Ask to see a warrant before unlocking your phone.

Police don’t have the right to search your bags without consent. If they suspect you might have a weapon, they may pat you down, but still cannot search your things.

Your Right To Remain Silent If Arrested

If you’re stopped by police, do not resist arrest, even if you think you’ve been unlawfully detained. Ask the officer what crime you’re suspected of committing. Ask if you’re free to leave. If so, walk away calmly.

If not, the Fifth Amendment gives you the right to remain silent. Tell officers you’re exercising this right, and ask for a lawyer. You have the right to a government-appointed lawyer if you can’t afford one.

You don’t have to answer questions about where you were born or your citizenship status, unless you’re at a border or airport. (If you’re not a permanent resident, the National Immigration Law Center recommends talking with local labor leaders or your union representative to make sure protesting won’t jeopardize your job.)

Your Right To Report A Police Violation

If you think your rights have been violated, document everything. Write down the officer’s badge number, patrol car number, and their affiliated agency, if possible. Get contact information from potential witnesses, and take photos of any injuries or destruction. With this information, you can file a complaint or sue for a civil rights violation once you get home.

More like this
How To Help Those Affected By The Turkey-Syria Earthquake
By El Hunt
6 Organizations Fighting Police Brutality That You Can Support Right Now
By Syeda Khaula Saad and JR Thorpe
24 History-Making Black Women You Probably Didn't Learn About In School
By Ayana Lage and JR Thorpe
8 Charities To Donate To During Black History Month
By Alexis Morillo
Get Even More From Bustle — Sign Up For The Newsletter
From hair trends to relationship advice, our daily newsletter has everything you need to sound like a person who’s on TikTok, even if you aren’t.