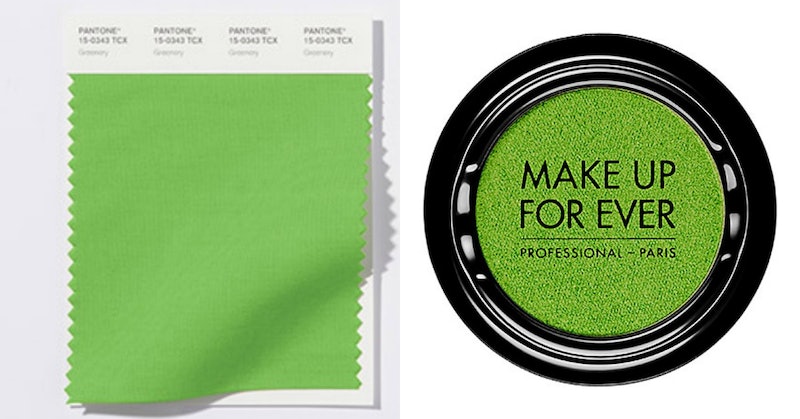 Just as they do every year, Pantone announced its pick for the hue that will be everywhere in the next 12 months. The choice is based on trends, culture, and even politics, giving you a sneak peek into what you'll be seeing all over your favorite street style blogs and home decor Pinterest boards. So, what is Pantone 2017 Color of the Year? It's technically "PANTONE 15-0343 Greenery," but you can call it simply "Greenery" for short.

Greenery, a fresh yellow-green hue based on "the essence of what we see taking place in our culture during a specific moment in time," according to a Pantone press release. It's also "symbolic of new beginnings, evoking the first days of spring when nature's greens revive, restore, and renew," making the message clear: it's supposed to represent moving on, at long last, from the cesspool that has been 2016.

In recent years, the company has declared several bold shades to be their annual colors, including 2012's intense orange hue Tangerine Tango, 2013's vivid green color Emerald, 2014's vibrant lavender shade Radiant Orchid, and 2015's rich brownish red hue Marsala. Pantone switched things up for 2016, delivering a beautifully soft gradient of pink and blue with Rose Quartz and Serenity. However, with the arrival of 2017's Greenery, it's clear they're back to brights for the time being.

If you can't get enough of Greenery, don't worry — I've got you covered with plenty of products that are sure to fit this ever-so-slightly slimy shade into your home, wardrobe, and even beauty routine.

More like this
This Week’s New Makeup Releases & More Beauty Headlines
By Audrey Noble
Bustle Daily Newsletter: November 25, 2022
By Hayley Schueneman
Experts Say These 35 Cheap Beauty Products Actually Work As Well As Expensive Ones
By Alexandra Elizabeth
35 Genius Secret Santa Gifts For Someone You Don’t Know Very Well
By Rebecca Deczynski and Lauren Grant
Get Even More From Bustle — Sign Up For The Newsletter