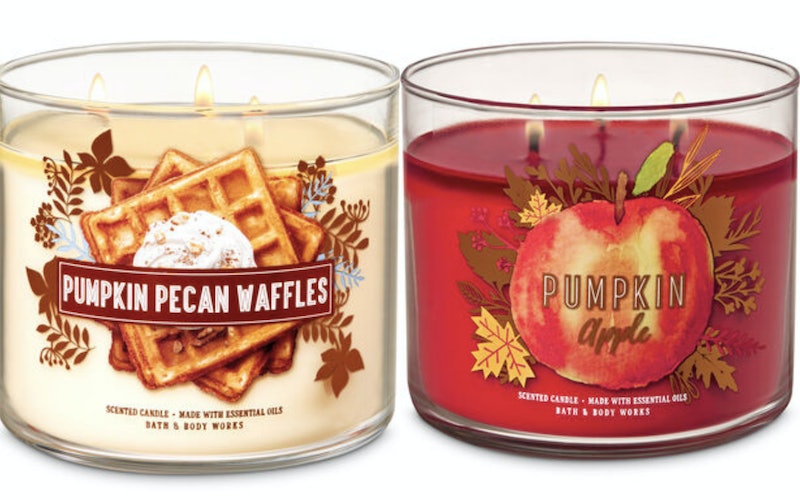 The leaves are still a bright green and clinging onto tree branches, but in my heart it's always autumn where crisp yellow leaves crinkle under my knee high boots and everything smells like pumpkin. If you, like me, relish in the season after summer you'll be pleased to know that there are a number of pumpkin-scented candles you can get at Bath & Body Works right now. Because cinnamon and cardamom are warm scents that should feel welcomed year round. At least in my house.

We may have months to go before it's PSL season, but that doesn't mean your entire house can't carry the aroma of pumpkin spice during berry season. Pumpkins aren't exactly year round crops, but the love for them spans all 365 days. Thankfully pumpkin spice, which has become the signature scent of pumpkin, can be inhaled no matter the month.

Bath & Body Works carries a number of pumpkin-scented candles that you can go out and get right now. But I know that most of the country is in the midst of dealing with heat wave after heat wave, and so you might not want to remove yourself from the path of your A/C unit. That's ~cool~ because you can order these candles online too. Let's fast forward this year to autumn courtesy of this very fall-y candles.

What is more comforting than waking up to warm waffles and a stream of maple syrup on a cool morning? That may seem like a far off fantasy, but it's not. Not really. The Pumpkin Pecan Waffles gives off an aroma of "maple syrup, golden waffles, pumpkin spice and brown sugar." Autumn comfort is just an order from Bath & Body Works away.

Already bored of berry pies? Get a taste — or whiff — of Thanksgiving dessert when you light Bath & Body Works' Pumpkin Pie Candle. You'll notice notes of vanilla, freshly ground nutmeg, and graham crackers. Whatever you do, no matter how tempting this smells, leave the fork in the kitchen. Do not consume the candles. This candle is only available online.

You know how good it feels to walk into a bakery. All the freshly baked pastries welcome you, enveloping you in a warm embrace of caramelized sugar and buttercream. Lighting the Pumpkin Cupcake Candle is like that, except you're walking into your room. It smells like Madagascar vanilla, pumpkin spice, buttercream and that warm, just baked cupcake scent. Again, do not eat the candles.

The apple orchard comes to you with the Pumpkin Apple Candle. With notes of cinnamon, clove, Red Delicious apples and pumpkin, it'll smell like fall just hit you in the face. I'd recommend buying a bag of apple cider donuts, if you can find them, to fully commit to this scent.

This is pumpkin spice, mixed into so wax, for you to light and enjoy. Notes full of cinnamon, nutmeg and clove will jump out at you making you wonder what time of year it actually is. Hold off on slipping into that cute sweater. It's not exactly the right kind of weather just yet.

Cinnamon and pumpkin go together just as well as peanut butter and jelly. This Sweet Cinnamon Pumpkin Candle will warm up the scent of your room without actually making it is-the-heat-on toasty.

There's something pumpkin scented for everyone. This candle has something for those who like it a little ~salty~. With notes of salty peanuts and toasted pumpkin seeds as well as caramel, it'll smell like someone's been baking all day. Make sure you have a slice of pie or actual peanut brittle to break into once the craving hits.

Pumpkin and caramel work together to create magic. This Caramel Pumpkin Swirl Candle is bound to make you believe that the leaves are browning and it's time to go apple picking. All the fall favorite scents show up including cinnamon, brown sugar, vanilla and caramel.

It's like a latte, but it's actually a candle. The Marshmallow Pumpkin Latte scent will stand in for the real deal until it's that time of the year again when a PSL is in your grasp.

Marshmallows aren't just a summer thing. They float perfectly in a cup of hot chocolate mid-winter. But Bath & Body Works is working the scent into their fall lineup, pairing it nicely with warm vanilla and pumpkin spice. The Vanilla Pumpkin Marshmallow Candle is a must-have if you miss wearing flannels.

Don't fret, the season will soon turn and you'll be marching your Ugg boots to the nearest PSL coffee house. In the meantime, light one of the above mentioned pumpkin scented candles to feel like it's fall.