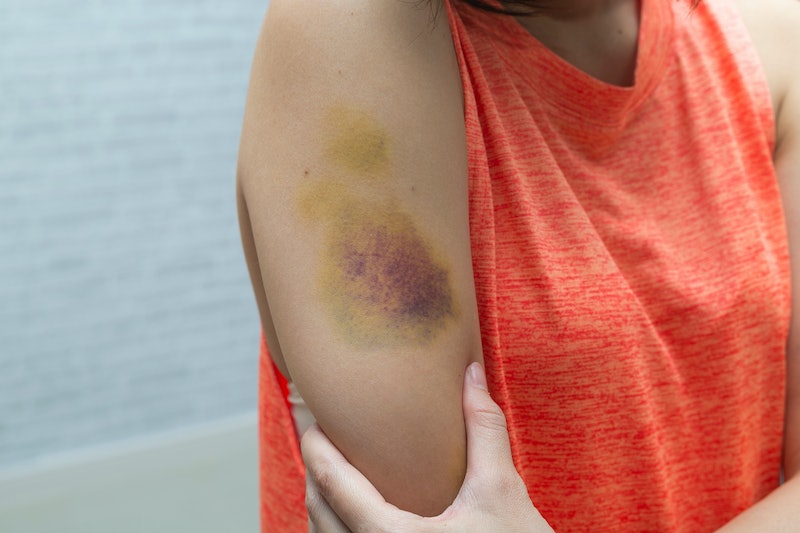 Bruises probably aren't something you typically give much thought. You might bump into a low table while you're walking through your house, and think, "Ouch, that's going to be a nasty bruise tomorrow." Or maybe you wake up in the morning, notice a purplish-blue mark on your elbow, and think, "Wow, how did this happen?" and then immediately proceed to forget about it. That's because bruises happen to all of us, and they usually aren't a big deal. But the truth is that sometimes bruising can be the sign of a larger health condition that you need to get checked out — and it's important to know how to tell if it is.

In general, a bruise is basically a form of internal bleeding. It's usually caused by some sort of trauma (a bump, a fall, etc.) that makes the blood vessels under your skin tear. When that happens, the blood leaks into the surrounding tissues and clots, which results in that black and blue mark you see on your skin. Some people bruise pretty easily, and that's not necessarily a sign of something larger. I, for example, wake up with bruises quite often, with no recollection of how they got there (I am extremely clumsy). Others don't bruise as easily. It's usually as simple as that!

There are some cases where it isn't that simple, though. It's rare for bruises to be a sign of something more serious, but it can and does definitely happen. Here are a few signs your bruises are part of a larger health condition: