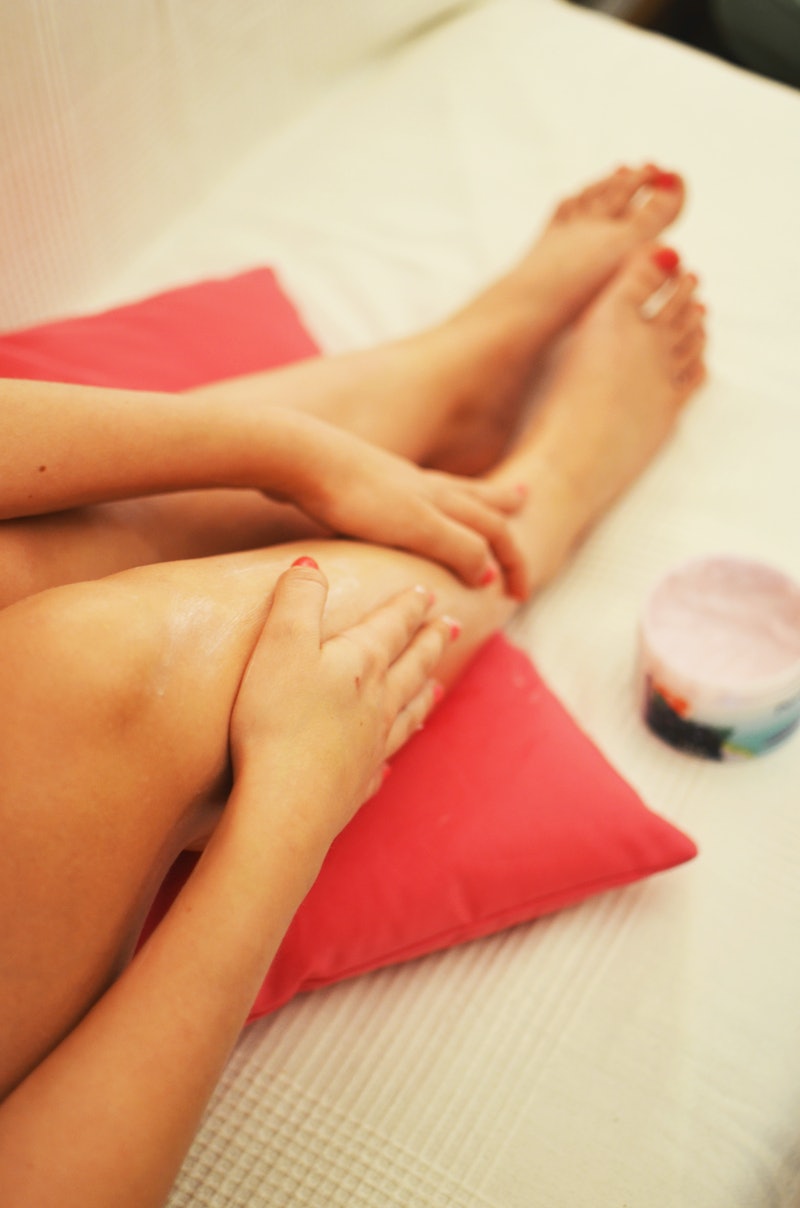 When I'm wearing shorts, a casual observer might assume I'm some sort of stunt person, or an MMA fighter, or an avid member of an underground fight club. Not because I'm particularly fit or nimble (I am neither) but because my legs are always covered in a dizzying array of random bruises. My mother's legs are the same way, and when I was growing up, my dad would ask us with great concern: "What are you doing?! How are you getting these bruises?" We would just shrug, and go about our days, knocking our way through coffee tables and desks.

As it turns out however, my rainbow of leg bruises is not just a result of my own clumsiness. Due to differences in our fat and skin composition, women are generally more prone to bruises than men, particularly on our arms and legs.

Bruises occur when the superficial blood vessels under your skin break and bleed. But for most men, these blood vessels are protected with a thicker layer of collagen than they are for most women, which means they are less likely to get damaged and break.

As dermatologist Dr. Jeffrey Benabio wrote in a blog post on bruises: "Easier bruising in women is probably because women’s skin is thinner ... and because the fat and blood vessels in their skin is organized a little differently compared to men. The dense collagen layer is thicker in men and the blood vessels are held more securely."

Another physiological difference that could explain why many women bruise more easily than men is that we have higher levels of estrogen, which "weakens blood vessel walls," Mayo Clinic dermatologist Dr. Dawn Davis, M.D., told Broadly. "It's why women get varicose veins, and why women's blood vessels change after menopause."

These are generalizations though, and may not hold true for all people. There are also a number of non-gender related reasons you might bruise easily, like frequent sun damage, which could make your skin less resilient, thus exposing blood vessels to more damage, or taking certain medications like aspirin, steroids, or blood thinners, which prevent blood clots and make you more susceptible to bruising.

In extremely rare instances, bruising can also be an indicator of a more serious underlying condition, like a blood disorder or liver disease, but these are uncommon. If for whatever reason you think your bruising may be abnormal, make sure to talk to a physician about it.

For the most part though, easily-bruised legs seem to be just another part of being a woman, so go ahead and flaunt your not-so-hard-earned black and blue gams.