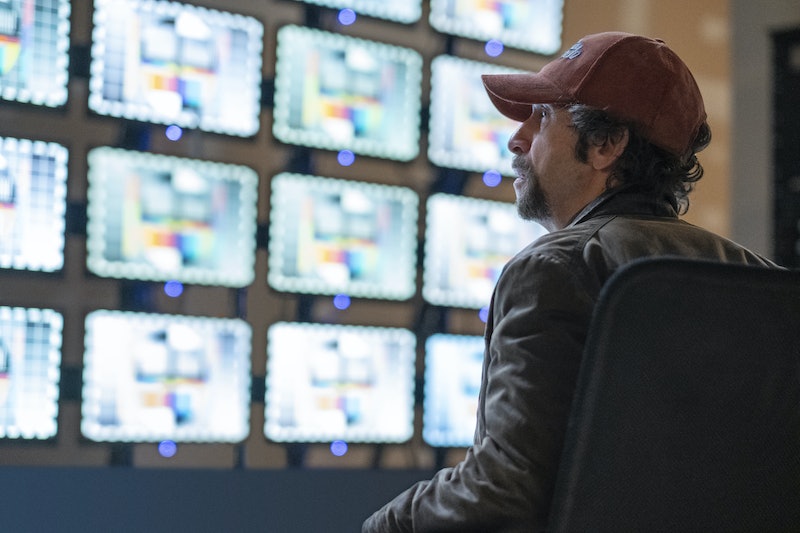 So far in Damon Lindelof's TV adaptation, audiences have witnessed one bonkers episode after another. Small sea creatures have fallen from the sky (likely some kind of fallout from Ozymandias dropping a giant squid on New York City in the '80s), the aforementioned Adrian Veidt (Jeremy Irons) has launched one clueless clone after another into the sky, to name a few.

For viewers unfamiliar with the graphic novel, the TV show has been one fever dream after another. But even for fans of the comic, the HBO series isn't a straight adaptation, so there's still really no knowing what will come next. As a result, Reddit has been rife with theories, both far-fetched and plausible. Here are just a few of them.

Poor Judd may be dead, but there are still some questions surrounding that night's events. "What if Will [Reeves, Angela's grandfather] gave / made Judd take nostalgia, and he ended up hanging himself?" psychicslime theorized on the Watchmen subreddit, referring to the drug that gives users memories.

2. Judd Was Snorting Nostalgia, Not Cocaine

Another user also theorized that the police chief had died by suicide, but with a different slant. "I feel like Judd just was deeply saddened by [f*cking] with Angela's head," Fredvv23 wrote. "I think it's possible he wasn't supposed to kill all the [Seventh Kavalry] in that first episode. That he went against orders. I think at the dinner table he's not snorting cocaine, it's possible he snorted nostalgia, that was somehow switched by Will. I think confronting the past in a more visceral way combined with his already sad and angry state pushed him over the edge."

3. Angela Is Actually a Clone

Audiences already know that cloning is a part of HBO's Watchmen universe (Poor Ms. Crookshanks and Mr. Phillips), which could certainly extend to the protagonist herself. "Angela died on The White Night and then was cloned," ChristopherAntilope wrote. "The Angela we see is a nostalgia-fuelled [sic] clone of the original Angela Abar." There's no evidence that this is the case, but it would certainly make things interesting.

4. Senator Keene Has Big Plans for the Portals

In Episode 5, both audiences and Wade Tillman (Tim Blake Nelson) learned that the Seventh Kavalry were experimenting with portals. According to Naggers123, Keene (James Wolk) will take advantage of Angela being behind bars by using "portals to invade the Millennium Clock and use it to broadcast the truth about the Squid Attack to the nation, [hijacking] Trieu's plan to broadcast the trauma of American atrocities instead." Speaking of Hong Chau's character...

5. Lady Trieu Was In the Comics

Redditor rbonaime points out that in Moore's novel, the Comedian killed a pregnant Vietnamese woman while Dr. Manhattan watched. "My theory is that after what we saw in the book, Manhattan did intervene, and the baby is Lady Trieu," the user wrote. It would certainly explain why two characters in the HBO series are from Vietnam (Trieu and Angela).

6. The Millennium Clock Is Really "An Empathy Bomb"

VicDiGital points out that there must be some common thread between the Vietnam War and the Tulsa riots — both of which are referenced (if not depicted) in Watchmen. The user goes into extensive detail, but the gist of it is as follows: "The Millennium Clock is going to be an Empathy Bomb (or Pulse or Wave). In order to wipe out racism and prejudice and just people being crappy to each other, Lady Trieu has been working on a way to share experiences of those from the past with those in the present."

7. Adrian Veidt's Storyline Is Happening at a Different Time

Is anyone else confused every time Jeremy Irons launches more clones into the nether regions? Granted, we now know he was trying to figure out how to get out of his prison, but it's still such a bizarre thing to watch. "I think that the scenes we've been getting of Veidt so far have been a couple years before the events of the rest of the series," strandedbaby theorized. "Each episode, Veidt's cake has another candle. In Episode 4, he says that he's been stuck at the manor for 4 years. In the main timeline of the show he's been missing for 7 years, which suggests he's still 3 years (and if the pattern holds, 3 episodes) from catching up with the rest of the show."

8. Veidt Is Stuck Inside His Statue

Alright, bear with me on this one. "Everything happening with Veidt is happening in his mind as he tries to break free of his mental prison," Nathan_Lego_Raffles wrote on Reddit, predicting that the statue that audiences see in Lady Trieu's garden is in fact his prison. "The absurd insanity of all that's happening in his world are all constructs of his own imagination. He has chosen what the world looks like, perhaps subconsciously, within a set of rules that have been imposed on him by whatever control system is keeping him stuck inside his own head."

This would explain the more bizarre things we've seen, like the tomatoes he picks off an apple tree. fonzieschemez had a similar idea, hypothesizing that Veidt is actually stuck in intrinsic field generator and is trying to assemble himself again.

This one makes a lot of sense. Not only does Petey have a similar build to the lithe, skinny vigilante audiences saw sliding into the sewer grate in Episode 4, but we already know how much he loves masks. And, as cl3arlycanadian theorized, Petey "had a reason to be following Angela, and was privy to her superhero personality."

However, there's only so much time left in Watchmen Season 1 for these theories to be either dispelled, proved, or perhaps just shelved. After all, Lindelof shows have a way of being confusing even after they've gone off the air.