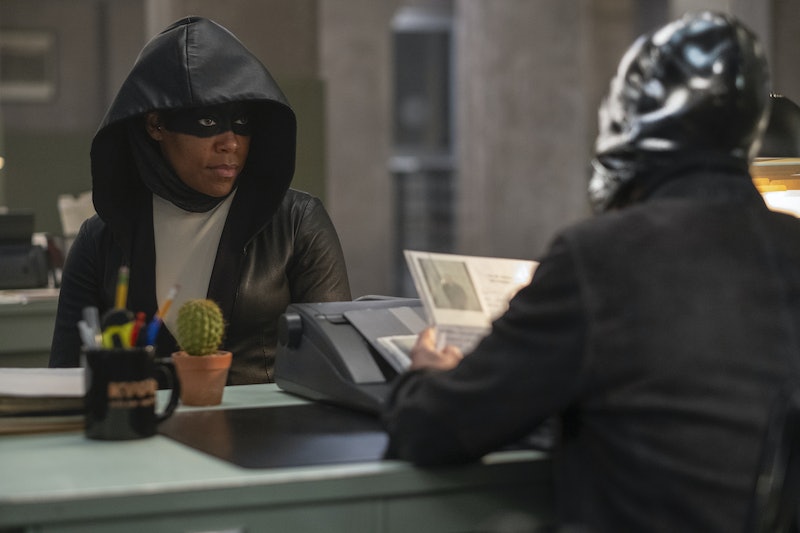 Giant squids, castles on Mars, and a man with a belt full of lube. There's a lot of bizarre and inexplicable events and characters in Watchmen, and now that we're at the halfway point of the season we've got quite a few unanswered Watchmen questions. While there are major theories around what Adrian Veidt is doing and what Lady Trieu and Will are planning, here are some other miscellaneous, but still just as important, mysteries to solve.

Where Is Doctor Manhattan?

The super-powered blue meta-human doesn't care at all about us, but we sure care a lot about how he's doing. As the only person with actual powers in the Watchmen universe, Dr. Manhattan's whereabouts hangs heavy over the series. Is he actually getting any of Laurie's voicemails? Does he care that Earth is facing another possible apocalypse? Did he imprison Veidt? Is he even in the same galaxy at this point, and will anything convince him to return?

Who Are Crookshanks & Philips?

We know Veidt is imprisoned with them, but the three of them are not made by Veidt himself. Is it possible they're cloned from somebody notable on Earth? Are they Doctor Manhattan's creations, or Lady Trieu's?

Listen, Wade is more socially aware than some of his colleagues, but when Angela asks if he knew that Judd was a racist, he simply answers that he was a "white man in Oklahoma." Et tu, Wade? It's clear he has some degree of fondness for Angela, or else he wouldn't have turned her in to protect her from Senator Keene and the Seventh Kavalry. Did Seventh Kavalry reach out to him because they saw him as a potential ally for some specific reason though?

Ultimately, Wade benefits from, and is complicit in, the same institutions that Will and Lady Trieu may be trying to destroy, so if he ends up siding with the Seventh Kavalry against Angela, I will be unsurprised but very sad.

Who Is Lube Man?

He douses himself in oil and slides into the gutter before Angela can catch him, but the mystery of who he is, and why he chose that outfit, has been haunting viewers.

Who Is Will Reeves, Really?

Will, Angela's grandfather, has been around since the start and is connected to the endgame plot with Lady Trieu, so a major question of Watchmen is why he's so important, and who he really is. There are plenty of theories that suggest Will is really Hooded Justice, the first Minutemen (aka, the first caped crusader) on the scene. In Episode 5, Angela swallows a whole bottle of Will's Nostalgia (pills that contain memories), so fans may very well find out once and for all who Will is next week.

Where Is The Squid FROM?

A question the show and the comic doesn't really address is why Veidt decided to unleash a squid of all things on New York City. He's also imprisoned off world at this point, so who's actually making extra tiny squids fall? Where are they falling from? Considering the video he sent to President Redford, is it actually the government maintaining his farce? And are they paying for a secret post-squid fall cleaning task force?

Who Else On The Police Force Is 7th Kavalry?

Finding out both Senator Keene and Chief of Police Judd were Seventh Kavalry leaders points to yet another uncomfortable inquiry: how many other white supremacists are in politics and on the police force? At the start, it wasn't clear if Watchmen was ever going to address positioning the police and the Seventh Kavalry as polar opposites, but now it's clear that Watchmen is about to get a lot more nuanced in its exploration of institutionalized racism. (It helps to know that the Watchmen writers room is predominantly people of color.)

So who else knew about Judd, or at the very least, holds the same views as the Seventh Kavalry? Pirate Jenny would probably side with Angela and Laurie, but it's harder to trust where Red Scare and Panda would land. (Panda specifically gave the Black cop in Episode 1 a hard time about unlocking his gun, which ultimately led to his sudden death.)

Dan Dreiberg, aka Night Owl II, was a teammate and lover of Laurie Blake during the events of the Watchmen comic. We know from Agent Pete's Peteypedia that both Dan and Laurie were arrested for vigilanteism at one point, and Keene's conversation with Laurie about "releasing the owl from the cage" hints Dan's still in jail. He's not powerful like Dr. Manhattan, but he's definitely a major missing Watchmen character, and the cops were piloting his owl-eyed apparatus in Episode 1. Is he secretly working with the police force then, or did they just seize his ship when he was arrested?

I just want to make sure that Angela is taking care of herself, OK?