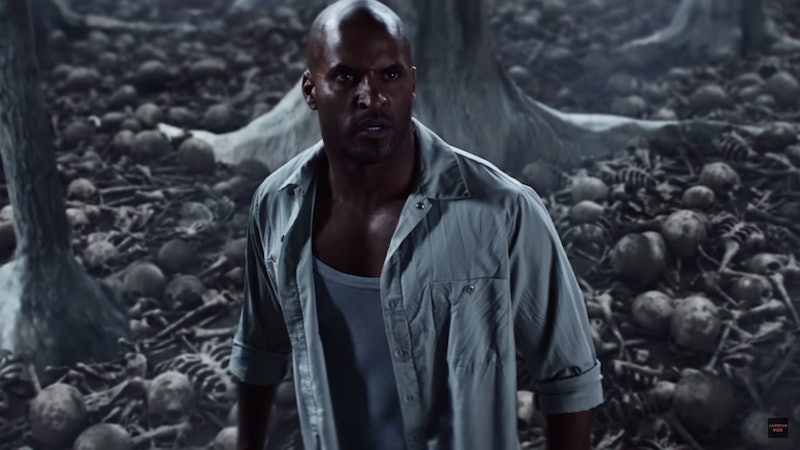 The Starz adaptation of Neil Gaiman's 2001 novel American Gods has been all anyone can talk about this year, but we shouldn't let our excitement over Ricky Whittle's new role get in the way of fantastic literature. I've got 11 American Gods book quotes to make you think and feel so many things, and maybe even give you that final push toward re-reading Gaiman's instant classic.

The Hugo- and Nebula-winning novel centers on Shadow Moon, who is released from prison, only to find out that his wife, Laura, has died a few days previous. On his way to the funeral, Shadow meets Mr. Wednesday, who takes him on as a bodyguard for his cross-country trip to gather forces for the coming war between the Old Gods — the Queen of Sheba, Czernobog, Easter, and others — and the New Gods — such as the Internet and Television.

American Gods is not an easy book. Yes, Gaiman's storytelling sweeps you along so smoothly that the story is over before you know it — not a bad thing, but certainly one that leaves readers clamoring for more mystery and mayhem — but the novel deals with a lot of difficult subject matter, including lots of non-gratuitous sex and violence.

At the forefront, there's Gaiman's concept of a wide pantheon of gods — including mainstays from every continent — that exist in our world, but only so long as there are folks who believe in them. There are living, breathing deities and ones who have already passed away into nothingness, both of which the Starz series is sure to cover in depth.

There are no spoilers here, so feel free to read the American Gods book quotes below with abandon, even if you haven't read Gaiman's most famous novel. Check out the passages I've selected below, and be sure to share your favorites with me on Twitter!

More like this
'The Sandman’s Ending Is A Departure From Neil Gaiman’s Comic Book Series
By Kadin Burnett
10 Must-Read New Books Out This Week
By K.W. Colyard
The Biggest Differences Between 'Bullet Train' & The Book It’s Based On
By Arya Roshanian
I've Read The Harry Potter Books 30+ Times & This Plot Hole Haunts Me
By Kelsey Stiegman
Get Even More From Bustle — Sign Up For The Newsletter