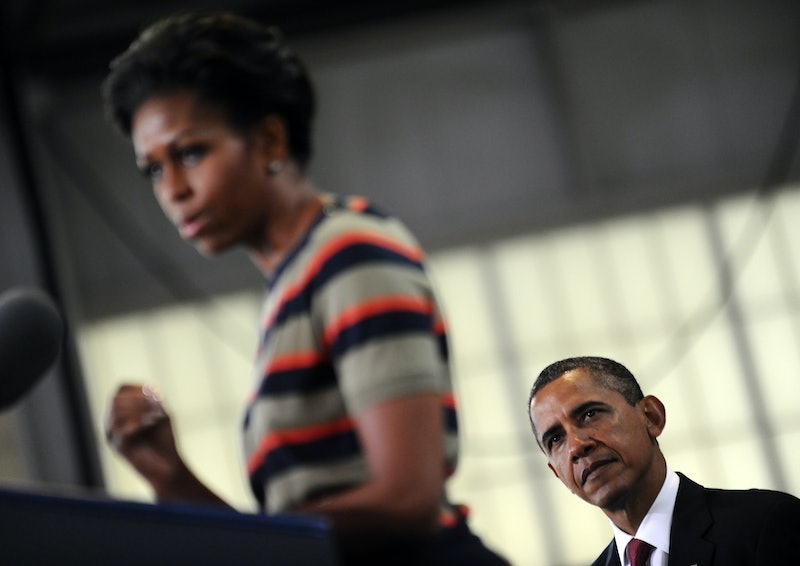 Over the last eight years America has watched President Barack Obama and his family live and grow in the White House. Between hosting long-standing traditions like the Thanksgiving Presidential Turkey Pardon or the Easter Egg Roll, welcoming dignitaries during official State visits, and easing citizens' concerns in hard times, the Obamas' time in the White House has been defined with grace and dignity. But along an immeasurable amount of class, America's first couple has also been a model couple, exhibiting a subtly joyous and affectionate kind of love. Often that love can be felt in the many things Obama has said about his marriage to about Michelle.

The Obamas have been bringing us some serious #RelationshipGoal realness throughout Obama's eight years in office. Married for 24 years, the Obamas have had to spend a significant portion of their relationship under the scrutiny of the press and the public. However, if the affection the first family continually showers on each other is any indication, the couple hasn't allowed his job as president to alter how they interact with each other or their two children.

Here are 11 things President Obama has said about First Lady Michelle Obama that will make your heart melt:

"There's no doubt I'm a better man having spent time with Michelle," Obama told Vogue's Jonathan Van Meter in 2013. "I would never say that Michelle's a better woman, but I will say she's a little more patient."

"Anybody who knows her well knows she's got the best sense of humor of anyone you'd ever want to meet," Obama said about Michelle during an interview with Marie Claire in 2008. "She's the most quintessentially American person I know... She's just a wonderfully normal, levelheaded person. Any American woman who meets her would immediately identify her as a fellow traveler."

"If you were going to list the 100 most popular things that I have done as president, being married to Michelle Obama is number one," reportedly said after giving his first State of The Union Address.

"Michelle’s like Beyoncé in that song, ‘Let me upgrade ya!’ She upgraded me," Obama admitted in an interview with Vogue.

What I Value Most About My Marriage

"What I value most about my marriage is that it is separate and apart from a lot of the silliness of Washington," Obama told the New York Times in 2009. "And Michelle is not part of that silliness."

I Couldn't Have Done It Without Her

"Obviously I couldn't have done anything that I've done without Michelle," Obama told Oprah Winfrey in 2011 "You were asking earlier what keeps me sane, what keeps me balanced, what allows me to deal with the pressure. It is this young lady right here... Not only has she been a great first lady, she is just my rock. I count on her in so many ways every single day."

"She's also funny," Obama told Ladies Home Journal in 2012. "She's the funniest person in our family." While it's a simple compliment, the fact that it comes from a man with a serious talent for comedic timing makes it all the more wonderful.

"She is a great mom," Obama told Vogue in 2013 while discussing his marriage to Michelle. "What is also true is Michelle’s had to accommodate a life that it's fair to say was not necessarily what she envisioned for herself. She has to put up with me. And my schedule and my stresses. And she’s done a great job on that. But I think it would be a mistake to think that my wife, when I walk in the door, is, 'Hey, honey, how was your day? Let me give you a neck rub.' It's not as if Michelle is thinking in terms of, 'How do I cater to my husband?' I think it's much more, 'We’re a team, and how do I make sure that this guy is together enough that he's paying attention to his girls and not forgetting the basketball game that he’s supposed to be going to on Sunday?' So she's basically managing me quite effectively.

"I've got to say, I always found it great if she was making all kinds of money," Obama told Marie Claire in 2008 when asked about the years where Michelle brought in a higher income than him. "I didn't feel threatened by that at all. My grandmother generally earned more than my grandfather when I was in high school, so that probably makes me more comfortable with some of these issues than others would be."

"Having said all those things, the quality I love most about her is, she's honest and genuine," Obama said in an interview published in the September 2012 issue of Ladies Home Journal. "I think that comes across to people. They get a sense that they can trust her. You know, the word 'authenticity' is overused these days. But I do think it captures what folks are looking for – not just in leaders, but also in friends and in coworkers – and that is, folks who are on the level. People like that tell you what they think and don't have a bunch of hidden motives. That's who Michelle is."

I Couldn't Be More Proud

"Incredible speech by an incredible woman," Obama tweeted on July 26 after Michelle spoke at the 2016 Democratic National Convention. "Couldn't be more proud & our country has been blessed to have her as FLOTUS. I love you, Michelle."

More like this
Kim Kardashian & Pete Davidson’s Relationship Timeline From Start To Finish
By Jordyn Tilchen and Bustle Editors
Khloé Kardashian Is Reportedly Dating A Private Equity Investor She Met Through Kim
By Jordyn Tilchen
Christina Aguilera Took A Powerful Stand At Brighton Pride
By Sam Ramsden
Are John Legend & Kanye West Still Friends? The Singer’s Latest Update Is Candid
By Brad Witter
Get Even More From Bustle — Sign Up For The Newsletter