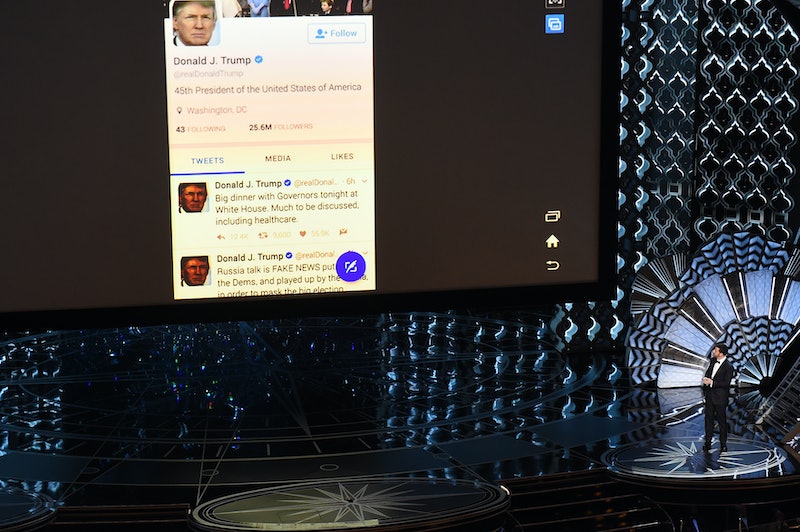 The biggest story at this year's Academy Awards was the jaw-dropping, historic mix-up that played out when, due to a logistical mistake, La La Land was initially given the award for Best Picture when, in fact, the real winner was Moonlight. But that wasn't the only notable thing about this year's Oscars. In addition to the Best Picture snafu, the ceremony was aggressively political from front to back, and you can probably guess who the target was. There were quite a few anti-Trump burns from the Oscars — and some definitely stood out.

To be sure, this year's awards will primarily be remembered for the Best Picture mix-up, which was so shocking and unprecedented that some have interpreted it as evidence that we're actually living in a computer simulation. But the Trump bashing was significant as well, especially given that last year's Oscars were criticized by many progressives for failing to sufficiently recognize non-white artists and filmmakers. This year's ceremony, by comparison was aggressively liberal, and given the current occupant of the Oval Office, that largely took the form of relentless Trump-bashing.

Conservatives decried the awards for being "too political" — but if there's ever a time to get political, it's when you have a platform of several million TV viewers. Let's take a look at some of the biggest Trump burns from this year's Oscars.

"Maybe this is not a popular thing to say, but I want to say thank you to President Trump," Kimmel said in his opening monologue. "I mean, remember last year when it seemed like the Oscars were racist? That's gone, thanks to him."

"Everybody please join me in giving Meryl Streep a totally undeserved round of applause," Kimmel said of the universally-beloved actress, who Trump recently insulted on Twitter after she spoke out against him at the Golden Globes. "The highly overrated Meryl Streep, everyone."

“Some of you will get to come up on this stage tonight and give a speech that the President of the United States will tweet about in all caps during his 5 a.m. bowel movement tomorrow,” Kimmel said in one of several references to Trump's tweeting habits. “And I think that’s pretty darn excellent, if you ask me.”

Countries That Hate Us

"This broadcast is being watched live by millions of Americans," Kimmel said, "and around the world in more than 225 countries that now hate us." He didn't say that those countries hate us because of Trump, but we all know that's what he meant.

At one point, Kimmel pulled out his cell phone and began tweeting at Trump, right there on stage. "U up?" he asked.

Although she didn't reference Trump by name, 13th director Ava DuVernay wore a gown that was designed in Lebanon as a statement against Trump's ban on immigration from several Muslim-majority countries.

Iranian Director Sits It Out

Iranian director Asghar Farhadi won the award for Best Foreign Language film, but he boycotted the ceremony in protest of Trump's travel ban.

"My absence is out of respect for the people of my country and those of the other six nations who have been disrespected by the inhumane law that bans entry of immigrants to the U.S.," Farhadi wrote in a statement that was read on his behalf. "Dividing the world into the 'us' and 'our enemies' categories creates fear — a deceitful justification for aggression and war. These wars prevent democracy and human rights in countries which have, themselves, been victims of aggression."

“As a Mexican, as a Latin American, as a migrant worker, as a human being, I am against any form of wall that wants to separate us,” actor Gael Garcia Bernal said while presenting the award for Best Animated Film. Again, no mention of Trump by name, but this was clearly a reference to Trump's proposed U.S.-Mexico border wall.

"If you're from CNN, or the LA or New York Times — if you work for anything with the word 'times' in it, even like, Medieval times, I'd like to ask you to leave the building right now, okay?" Kimmel said, naming several of the news outlets that Trump referred to as the "enemy of the American People" recently. "We have no tolerance for fake news. Fake tans, we love. But fake news?"

“And now, for something that is very rare nowadays," Kimmel said while introducing Academy President Cheryl Boone Isaacs. "A president who believes in both arts and sciences."

In short, Hollywood doesn't seem to like Trump very much.