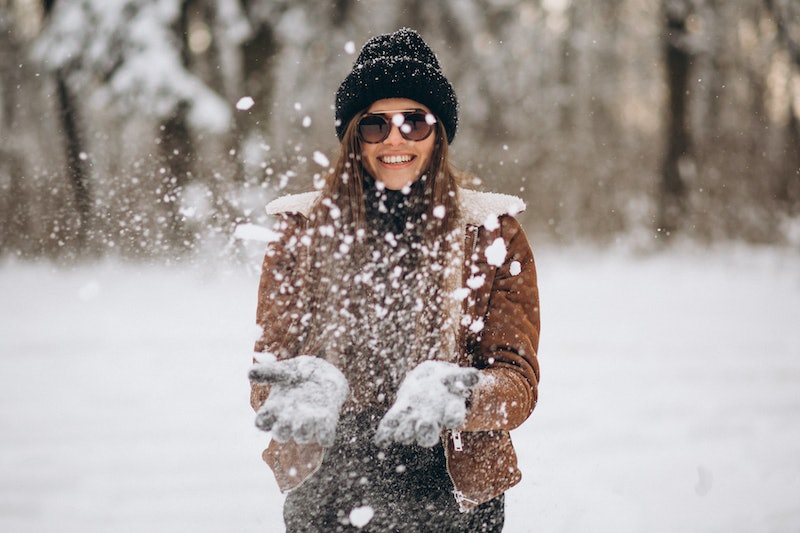 I can’t believe we’re getting yet another massive blizzard, but alas, here we are. This time, though, I’m prepared — and not just with a stocked kitchen and extra blankets. I’m also armed against winter boredom with a whole slew of cold weather science experiments sure to keep the most irritated of snow sufferers entertained until spring finally arrives.

If you grew up somewhere prone to snow, you may have done one or more of these neat little experiments at some point in your childhood. Maybe you did them at school or during science class; maybe you had a creative or scientifically minded caregiver who showed you how to do them; or maybe your situation was something different — but the point is that, in addition to being cool, these kinds of activities can also scratch your nostalgia itch while you’re at it. And given that nostalgia is good for us and can help battle the gloomy sort of mood that can set in during the colder months — well, that’s even more of a reason to give them a shot, isn’t it?

The best part is, most of these projects don’t require much to pull off; odds are you’ve got the equipment to do at least a few of them already hanging around your home. So what are you waiting for? Bundle up, head outside, and let’s get cracking! (Safely, of course. Seriously, make sure you exercise basic precautions while performing these experiments. Safety first!)

1. Blow Some Soap Bubbles And Watch Them Freeze

Frozen bubbles might be the oldest one in the book, but it’s still a blast every. Single. Time. Or maybe that’s just me. Anyway, all you need to do is head outside with one of those little plastic wands and some bubble solution (heat it up first for some extra oomph), and blow away! If you don’t have any bubble solution on hand, it’s easy to make your own bubble solution by mixing together two cups of water, half a cup of dish soap, and two teaspoons of sugar.

A lot of rumors have been circulating lately about whether the snow is "real" or if it's "fake" and "poisoned" (yikes!). Why? Because you take a lighter to it, it seems to burn rather than melt, turning black and giving off a weird smell — hence the belief that it's made of plastic or something. Here’s what’s actually going on: The snow is, in fact, melting, but because it’s loose and fluffy, the water wicks away as it melts. This turns dry snow first into wet snow, then into slush. The snow blackens due to soot from the lighter, not because the snow is burning; the lighter is also the source of the weird smell. But hey, why not give it a shot yourself? Just be careful, what with the whole "fire indoors" thing and all.

3. Kill A Balloon — Then Bring It Back To Life

Disclaimer: This one is my favorite. First, inflate a balloon while you’re nice and toasty warm inside. Then take it outside. Oh noes! What’s happening to your poor balloon? Why is it deflating? Has it breathed its last breath?! Not so much — promise. Bring it back indoors...and watch it magically come back to life! Here’s how it works: The air inside the balloon shrinks and expands as it decreases and increases in density (it's a gas, after all). When it’s inside and warm, the gas is at a lower density; bringing it outside into the cold increases the density, making it look like your balloon is dying. Bringing it back into the warmth reverses the effect.

Take a two-liter bottle of your favorite soda and leave it out in the snow for about four hours. Then retrieve it and twist off the cap. Opening the bottle unleashes a chain reaction that leads to the formation of ice crystals, turning the soda into an instant Slurpee. Yum!

5. Turn A Banana Into A Hammer

No hammer? No problem! Hang a banana outside for a few hours; after it's been out there long enough, it'll freeze solid — solid enough for you to be able to hammer actual nails with it. You can also do freeze the banana in liquid nitrogen, but I don’t know many people who regularly keep liquid nitrogen around their homes. Except maybe for this guy, and well… we all know how that turned out. (Safety note: Don't try to freeze a banana with liquid nitrogen.)

Who needs a flame thrower when you’ve got an ice thrower instead? Fill a Super Soaker with boiling water, then shoot it out into the cold. When very hot water meets very cold air, the water vaporizes, turning it into ice crystals — essentially, homemade snow. Generally this experiment only works when it’s below zero, so if you live in, say, Minnesota, you're good to go. You can also do it by tossing a pot of boiling water into the air, but be careful — this method could result in some major ouchies. (Again, safety note: Be careful!)

I wouldn’t recommend actually eating it, but leaving a frying pan outside for about fifteen minutes before cracking an egg into it results in something resembling breakfast. Gross? A little. Cool? Definitely.

First, the pins: Fill a bunch of empty soda bottles with water and a few drops of food coloring before letting them freeze outside. Then make your bowling ball: Use a sharpie to mark a mini seedless watermelon with where your finger holes need to go. Carve out the finger holes with a knife, take the watermelon outside, and set it near your pins. Once everything has frozen solid, set the pins up in your driveway, grab a few friends, and see who can bowl the most strikes.

Bring some maple syrup to a boil, but don’t stir it while you’re heating it up. Once it’s reached 234 degrees Fahrenheit, bring the pot of molten maple goodness outside and pour it onto a clean expanse of snow. Then stick a popsicle stick into one end and roll it along the snow, rolling the hardening maple syrup as you go. Delish!

Smuckers Magic Shell ice cream topping is primarily coconut oil, which melts at 74 degrees Fahrenheit. Make a snowball, coat it with Magic Shell, then poke a hole in it and let the water drain out as the water melts. Water melts above 32 F, so as long as the temperature is below 65 F, you should be left with a hollow replica of the shape, but made entirely of chocolate. Next step? Eat it.

11. Go Sledding On A Frozen Towel

When I was in college, we used to take the trays from the dining hall and go sledding on them when it snowed. I wish I’d known about this frozen towel trick then, though, because the trays definitely didn’t work as well as we thought they should have. To make your own sled, soak a towel you don’t care much about in water and let it freeze flat overnight. The next day, it should be rock solid. Take it to your favorite hill and recapture your childhood. Ah, nostalgia!

This article was originally published on Feb. 13, 2014