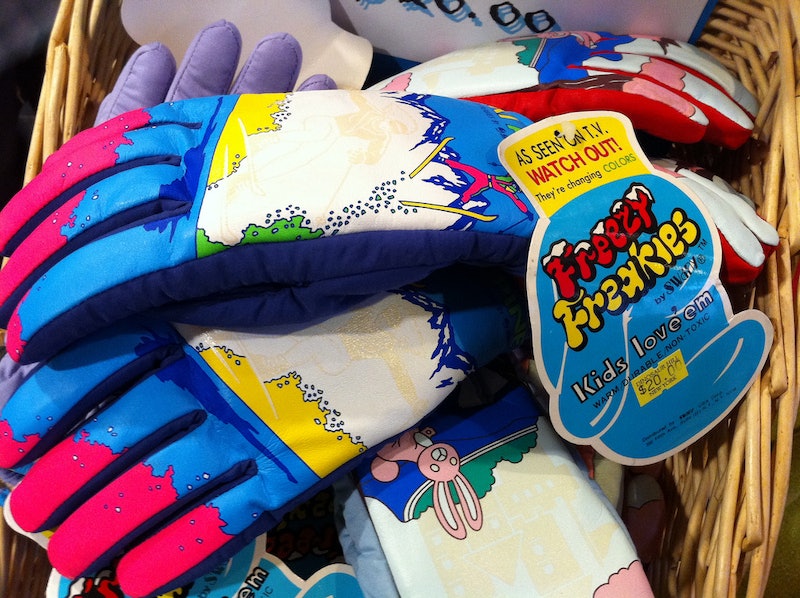 I'm a big fan of the cold weather seasons, and I always have been. Even so, though, some parts of these seasons aren't so great — especially when you're a kid. And when you grew up when I did? Well, let's just say that the kinds of winter struggles '90s kids faced are extremely different from the ones dealt with by today's youth. Being stuck inside during a blizzard isn't such a big deal when you've got fast and speedy Internet access to keep you entertained.

It's worth noting that a lot of the struggles I've recollected here may only be applicable if you grew up somewhere with actual seasons — including winters with actual snow. This is largely because, to be honest, places that are warm pretty much all year round (I’m looking at you, Southern California) don’t really have any winter struggles besides maybe, y’know, needing to actually wear a light jacket on occasion. There’s a reason so many people like to travel to warm climates during the winter, and it has everything to do with getting away from the snow for a while.

Some '90s kid winter struggles are universal, though, particularly when you add in the whole "holiday season" element. Remember these 15 downsides? I sure do. Heck, I still do. Kids today have it so easy — even if saying so means that I'm an old fogey.

1. The Disappointment of a Deflated Sno-Tube

Their color-changing abilities were so cool… until they stopped working. Temperature-sensitive clothing is, unfortunately, not immortal.

3. Snow in Your Moon Boots

So cold. So very cold. Especially when it happened at recess and you had to deal with soaking wet socks for the rest of the day.

4. Going to the Movie Theater to See Home Alone 2 and Finding Out It’s Sold Out When You Got There

Life before Fandango: How did we do it?

5. Finding Out You’ve Got a Snow Day After You’ve Gotten Ready To Leave For School

These days, news of snow days is usually spread via the Internet — which means that it happens a lot more quickly than it used to. Remember watching the morning news on the actual television, waiting with baited breath to see if your school would be one of the names scrolling across the bottom of the screen, informing you that classes had been cancelled? Remember going the entire morning without seeing your school’s name there… only for it to appear literally right before you were about to head out the door? So much for being able to sleep in.

6. Being Stuck Inside on a Snow Day with Nothing to Do

While it’s true that from a safety standpoint, waiting until after the massive blizzard was over before you went outside to play in the snow was the right thing to do, it still sucked being stuck inside until the storm finished up. Too bad you couldn’t just download yourself a new book to read at the click of a button in the ‘90s.

7. Not Being Allowed to Watch Nightmare Before Christmas Because It Scared Your Younger Sibling

What? You’re depriving me of my beautifully-wrapped shrunken heads and terrified small children? You monster.

8. Decking Yourself in Body Glitter for Your School’s Winter Wonderland Dance…

…Only for it to end up pretty much everywhere except where you meant it to be — not unlike stray Christmas tree pine needles.

9. Struggling to Get Your Holiday Shopping Done

When you’re working off a maximum of $10 per person and the limitations of a ‘90s shopping mall… well, let’s just say it’s a lot more difficult that logging onto Amazon and getting it all done in one fell swoop.

And while we’re on the subject…

10. The Horrors of the Mall During the Holiday Season

It was the only time of year you could witness a grownass adult having a physical altercation with another grownass adult over something as inane as a plastic action figure. Jingle All The Way would never happen today, thanks to the wonders of online shopping.

11. When All the Mini Marshmallows in Your Instant Hot Chocolate Melted Before You Got a Chance to Enjoy Them

Possibly not a struggle unique to ‘90s kids, but one that most ‘90s kids can empathize with. This is why it always pays to make hot chocolate from scratch, complete with actual marshmallows. An envelope of dry, powdered stuff can only accomplish so much.

12. Trying and Failing to Get a Hold of a Box of Christmas Crunch

Or Christmas Cookie Crisp, or whatever your seasonally appropriate holiday gimmick food of choice was — even if you didn’t actually celebrate Christmas. That stuff was delicious, and it went fast.

…And discovering your nemesis sporting the exact same getup. How dare they.

I have no idea if snow pants for kids are as obnoxious these days as they were when I was a wee one, but good gravy, those overall-like contraptions were impossible to get in and out of easily. By the time you got all suited up for recess, it was time to come back inside. Curses!

I don’t care if “All I Want For Christmas (Is You)” is one of the most popular holiday songs of all time. I do not need to hear it 24 hours a day, seven days a week, for the entire month of December. Make it stop.

More like this
Jennifer Lopez Found The Perfect Ben Affleck Throwback Video For Mother’s Day
By Stephanie Topacio Long
How To See The Lunar Eclipse On May 15-16, 2022
By Kaitlyn Wylde
David Schwimmer Doesn't Remember This Classic 'Friends' Episode
By Sam Ramsden
5 Mini Skirt Outfits To Wear, Inspired By These Brave Souls
By Avery Matera
Get Even More From Bustle — Sign Up For The Newsletter