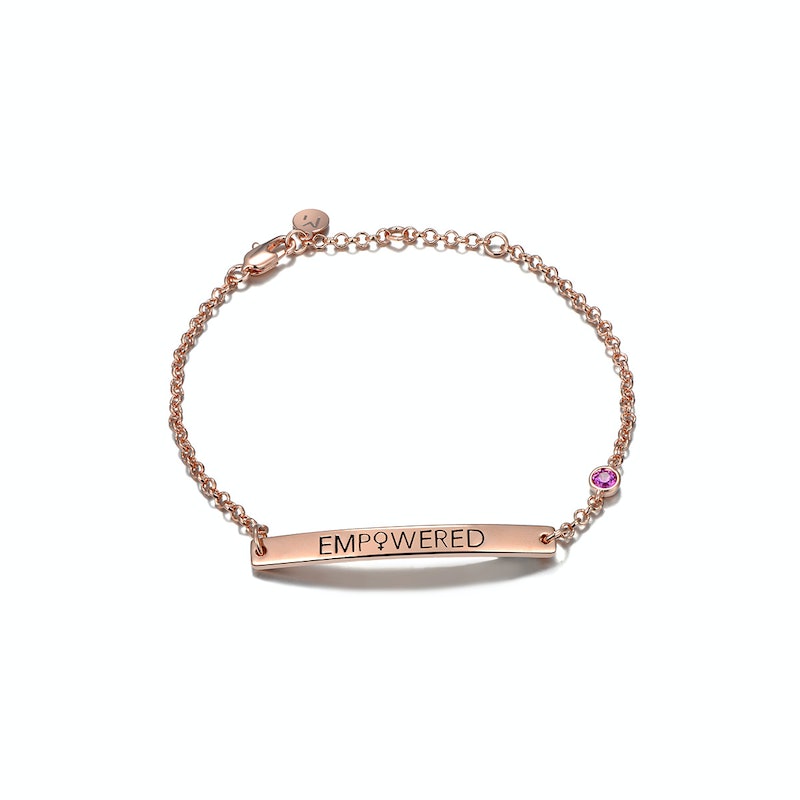 It's worth noting that supporting these brands doesn't necessarily need to happen on March 8: While some are gearing their giving efforts around the days surrounding International Women's Day itself, others donate proceeds to their chosen charities year-round. In fact, if you're participating in the Women's March's initiative A Day Without A Woman, they're encouraging women not to shop at all (with the exception of companies run by women or minorities and small businesses).

For the most part though, these items are available right now, and they'll be around after International Women's Day, too. (And if you do need to shop on March 8, supporting one of these companies is a good compromise.) From totes to statement tees to sweet bracelets, they can be the perfect gifts for the amazing women in your life (including yourself).

Here are some of the awesome items and cool companies that are putting a portion of their proceeds toward charities that support women in different ways around the globe.

If you do plan on shopping on March 8, H&M will be hosting an in-store register drive to raise money for Girl Up, an organization that supports UN programs that benefitting girls in developing countries.

A portion of the proceeds from each of these necklaces goes toward Planned Parenthood (there's a fantastic "Resist" pendant on offer, too).

100 percent of the proceeds from this ultra-hydrating set goes toward breast cancer organization Bright Pink. According to the site, the purchase of one set helps empower 12 women with breast cancer prevention and early detection.

A company that proudly advocates for female empowerment, Avon recently donated $500,000 to support 32 domestic violence organizations around the U.S. This bag specifically donates $1.50 from every purchase toward the Avon Foundation to fund programs to end violence against women.

20 percent of the proceeds from this bracelet goes toward the Peace Corps Let Girls Learn Fund, which fights for girls around the world to have access to education. Alex & Ani also has a bracelet benefitting Plan International's Because I Am A Girl initiative.

For International Women's Day, Everlane is expanding their 100% Human collection with a line of tanks and hoodies that feature blush accents and the phrase "Human Woman." $5 from each purchase goes toward Equality Now, "an organization dedicated to action for the civil, political, economic and social rights of girls and women."

ADAY is celebrating International Women's Day by donating 50 percent of proceeds on March 8 to Vital Voices, "an NGO whose mission is to identify, invest in and bring visibility to extraordinary women around the world."

Pura Vida has a range of bracelets that support women's causes year-round. 10 percent of the proceeds from this one in particular benefits NARAL Pro-Choice America.

In honor of International Women's Day, this ultra-chic limited edition tee has the words "libérez le nipple" stitched across the back in cursive. 20 percent of each shirt goes towards Free the Nipple, "a global movement for the equality, empowerment, and freedom of women worldwide."

100 percent of the proceeds from this cute kit goes toward Girls Who Code. The Hanky Panky undies, luxe beauty products, and tee that reads "Be Heard" are just a bonus.

Feel strong whenever you wear this dainty chain on your wrist — especially because $5 from every purchase will be donated to Planned Parenthood.