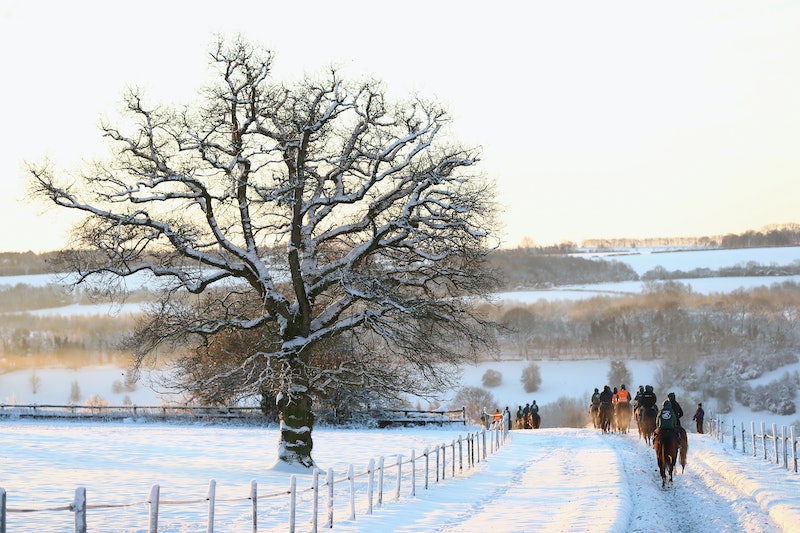 If the increasingly short days that we've been experiencing since this year's summer solstice (which occurred on Jun. 21, to be exact) have you feeling blue right about now, I'm right there with you. During fall, I usually revel in the idea of longer fall evenings for a few weeks, largely because they give me a great excuse to curl up on my couch a little bit earlier every night. However, each year without fail, I end up feeling very over it by early December... and, well, here we are. This year is no different. So I, for one, am positively thrilled that the winter solstice is now just around the corner, because that means the days will finally start to slowly get longer, and I can celebrate the joy that comes with more sunlight. There are, however, a few reasons to not look forward to it — namely, these creepy things you should probably know about the winter solstice. I just hope they don't temper your excitement about the lengthening days too much.

First, a brief winter solstice 101. This year, the solstice (which is also the first day of the astronomical winter) falls on Dec. 21. According to the Farmer's Almanac, the winter solstice is the day with the fewest hours of sunlight. On this day, the sun's path has hit its southernmost position, after which it begins moving north. What this means for all of us is that the days will start getting slightly longer come Dec. 22. Before you know it, it might actually be light outside when you leave the office!

Now that I've delivered the good news, let's get on to the creepy stuff. Check out these weird, interesting winter solstice facts.

1. The Word Solstice Comes From The Latin Term For "The Sun Stands Still."

Since the sun reaches its southernmost post on this day and then reverses its direction, I understand why it makes sense to call the event a "solstice" (from the Latin word solstitium, according to Time and Date) — but that doesn't mean that the sheer idea of a sun normally in motion coming to a halt doesn't totally freak me out.

2. Historically, The Winter Solstice Was Viewed As A Time Of Death

According to Mental Floss, cultures throughout history have observed the winter solstice as a celebration of death, and have marked it with ceremonial fires and slaughters. I guess this one's less creepy if you happen to believe that death brings rebirth with it (as some of these cultures did), but still.

3. Some People Believe That Stonehenge Was Built To Celebrate The Winter Solstice

There's so much mystery around Stonehenge's history and existence that pretty much anything related to it gives me the creeps. While there are a lot of theories about where this stone monument came from and why it's there, some experts believe that the design appears to correspond to the winter (and summer) solstice, according to the Farmer's Almanac.

4. The Winter Solstice Doesn't Affect Daylight Hours Equally For Everyone

While sun lovers everywhere will rejoice in longer days after the winter solstice, the rate at which those days will get longer is actually different based on your geography. Weird, right? Per Time and Date, people in the northern hemisphere will see a more rapid increase in daylight hours if they live at more northern latitudes.

5. New Worlds Have Been Discovered On The Winter Solstice

6. Some Cultures Believe That Dark Spirits Emerge On The Winter Solstice

Iranian, Celtic, and Germanic tradition says that different types of evil spirits emerge on this occasion. Certain cultures would even stay up all night on the winter solstice so they could avoid firsthand encounters with the darkness.

7. Stonehenge Aligns With The Sun On The Solstice

More creepy Stonehenge vibes! According to Mental Floss, the setting sun lines up with the spaces between the stone structures on the winter solstice, shining directly through the gaps. This explains why some have theorized that there's a link between Stonehenge and the solstice.

8. The 2012 Winter Solstice Was Thought By Some To Be The End Of The World

The Ancient Mayan calendar suggested that Dec. 21, 2012 was the end of a 5126-year cycle — aka, the end of life as we know it, or the start of some other disastrous event. Times may be tough, but I, for one, am glad we dodged this particular winter solstice bullet.

9. Meteorologists Mark The Start Of Winter On A Different Day

It always creeps me out when I'm getting different information from different experts and I'm not sure what to believe —especially when we're talking about facts of the physical world that I've always taken for granted. According to Mashable, meteorologists say that winter actually begins a few weeks before the solstice on Dec. 1. The day we commonly accept as the first day of winter (the solstice) is actually the start of the astronomical winter. Winter is bad enough as it is. Can we just pick one day to kick it off?

10. Some People Believe That Christmas Should Be Celebrated On The Winter Solstice

Because there's no actual date associated with Jesus's birth in the Bible, there are theories out there that early pagans actually celebrated Christmas on the winter solstice. Symbolically, this makes sense, since the day marks a rebirth and a new season, but it's unsettling to think that we could be so wrong about such a major holiday.

11. The Winter Solstice Was Once Closely Linked To Famine

Per Roselinde on the Road, the winter solstice was once associated with the start of famine months. Food stores would typically dwindle in the winter months between January and April, so ancient cultures would go all out with fresh food on the solstice.