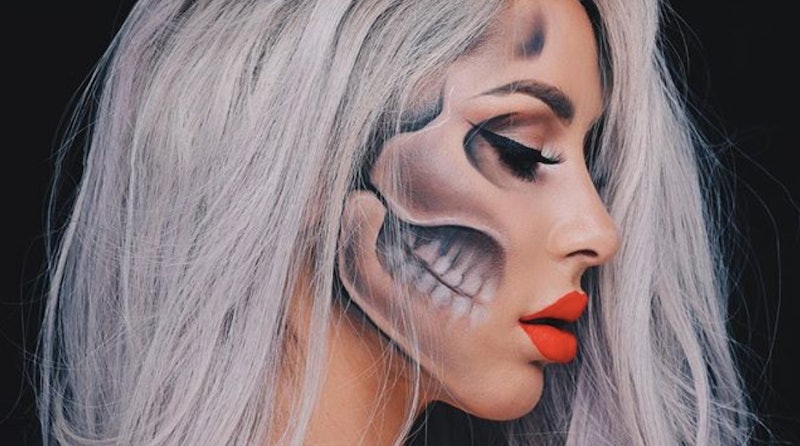 There are those who plan their costumes months in advance to celebrate All Hallows Eve, and then others who keep it simple, but want to be just the right amount of extra for an Instagram-worthy selfie. Those on the latter side would seek out the latest skull makeup tutorials online to lay low, but also channel their inner ghoul.

When it comes to skull makeup, there's almost no wrong way to go about it, which makes it a common go-to costume for anyone.

On the other hand, for your everyday makeup lover, they may not have the same eye (or the time) to do a full on deadly face beat for their next Halloween masquerade. Also, if the skull look is the costume you're shooting for this year, it's one that obviously relies heavily on your face. So not only do you want to look good and scary, but you'll want it to stay on while you bump to "I Put A Spell On You."

With the saturation of tutorials and how-tos, finding the easiest ones to achieve some masterfully sunken cheekbones can be tiring. So, to make Halloween a little less of a stressor, here are 11 easy skull makeup tutorials to make your face killer.

In the first of Chrisspy's legendary skull tutorials, she builds these hallowed cheeks with the Styled By Hrush Tarte palette and the game-changing Anastasia Beverly Hills Dipbrow in Chocolate.

If you don't want to break out your pocket book for your skull makeup, you don't have to. This tutorial by Cflower Makeup using the same products to blend out this skull face will help you maneuver your money and make your face deadly.

3. Unzipped Skeleton by Too Much Mouth

The unzipped skeleton has become an Instagram classic. You can jazz your natural melanin up like this chocolate queen, or go a step further and glam up the no makeup side of your face.

This easy-eyed skull look os achieved with a lot of blending. Using black and yellow eyeshadow and liquid liner for teeth, Jackie Nav makes her skull look like sleepless beauty.

For those of you who want to shake your black cat's core, this one is right on trend. Using only black, this tutorial gives you Evan Peters American Horror Story season 1 vibes.

6. Simple Skull from Beauty by Diana

Simple skulls don't mean simple skills as Diana keeps true to her natural face, but with a skull-like flare. If you don't want your natural beauty to get lost in the sauce of black ink, this tutorial is right up your alley.

A fierce skull from Tropical makeup serves up part glam and part ghoul in this skull tutorial. Drawing the top half of her face human and the bottom half soul-less, this look makes for a deadly combination.

If you're someone who embraces your goth side, but not into the strictly jet black skull face, Lillian's tutorial adds some purple and pink to color in this somber costume.

This glam skull is one you'll want to try if you enjoy being creepy and fabulous all in the same breadth. Chloe smokes out the eyes and even adds some scarecrow detailing on the neck as an added oddity.

10. Half Skull Half Glam by Stephanie Toms

While this tutorial looks the most intimidating, it uses the least products. You'll be shook when you learn Stephanie made this sick skull with 3 eyeliners and a small palette.

This Chrisspy-inspired tutorial by Destiny Matuet is one for the darker-skinned ladies. She uses a lighter foundation as a base to make sure all of the shading pops on her complexion and tops it off with a serious smoky eye.

Despite what's on the 'gram, Halloween doesn't have to be that hard, especially when you've got mounds of makeup on hand still waiting to be used.