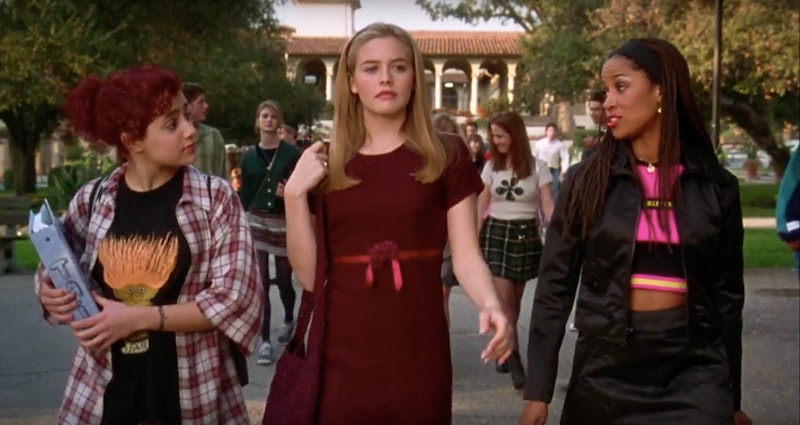 We've all been there: it's a rainy Sunday afternoon or perhaps you're visiting your parents for the holidays. You settle in to watch a movie and you can't decide on what to watch. If it's just you and your mom, things may get even trickier bridging the generational divide, but have no fear: there are a ton of feminist movies to watch on Netflix right now that span genres, eras, and categorizations. They're the kinds of films that you can bond with your mother over or cause you two to just forget your troubles and sink into something fun.

Are you looking for a laugh? I got you covered. Fancying a weepie with substance? Girl, you know I've already fired up a few suggestions for you. Netflix is kind of a mecca for feminist movies so long as you know where to look. There's currently some great hidden gems of the film and television streaming service; don't be afraid to scour.

But in case you're looking for a quick feminist fix when it comes to selecting a movie you and your mom will both absolutely love, I've rounded up some fun, exciting, and off-the-beaten-path options for you to try out.

Tracks follows Robyn, an Australian woman trekking 1,700 miles across the Australian bush because she wants to be alone and she wants to know if she is capable of doing it. Tracks is more Into The Wild than Eat, Pray, Love, choosing to create a protagonist that isn't interested in finding romance or getting stuck in an office. Instead, Robyn knows who she is and is looking to strengthen her soul and find herself. Plus, Mia Wasikowska, as Robyn, absolutely knocks it out of the park.

2. No Men Beyond This Point

This hilarious mockumentary posits a world where women have evolved so they can give birth on their own, thus eradicating the need for men. Women couple up and society becomes a female-centric, feminist one. A documentary crew follows one family as they discuss their lives as a unit of women (who get by with the help of their nanny/groundskeeper, the youngest man alive). Politics and comedy mix to hilarious effect in No Men Beyond This Point.

3. Margarita With A Straw

This touching film will surprise you, delight you, and probably leave you dabbing away those tears at the corner of your eyes. Margarita With A Straw is a beautiful film following a young heroine with cerebral palsy who not only ekes out a new life for herself while at New York University, but discovers new things about her own sexuality.

Are you and your mom looking to let off some steam and have a laugh. Then have no fear: Clueless is here. 22 years on and Clueless is a feminist cult classic that began as just a cheeky re-telling of Jane Austen's Emma. Clueless follows Cher as she tries to play matchmaker and agony aunt for her high school friends while trying to find love. But don't be mistaken by the overt rom-com trappings: Cher subverts "dumb blonde" stereotypes at every turn and proves herself to be more empowered than you think.

The Oscar-nominated Mustang is a emotional, raw, and tender portrait of five sisters who yearn to be modern women yet are cruelly stifled by cultural traditions around femininity and marriage. Largely told through the eyes of the youngest sister, Lale, Mustang follows as the sisters are sequestered by their relatives after playing with some boys on the beach. One by one, the girls are groomed from arranged marriages, often with heartbreaking results.

Tangerine will surprise you in the best ways. Following two Los Angeles working girls through one incredible day, Tangerine is a tale about friendship, queer identities, modern female sexuality, and the politics of being a sex worker when you're a trans woman. But all of that is incorporated into a raucous romp of a film. Don't worry: even the most pearl-clutching mother will warm to this film.

Moonrise Kingdom may not spring instantly to mind when asked for a feminist film recommendation, but trust me: Suzy, the heroine, is the best thing about this film and she is totally a feminist. In Moonrise Kingdom, Suzy is a young girl on the cusp of puberty. She runs away with her childhood sweetheart into the forest so that they can escape the doldrums of their daily lives. Suzy is into fantasy and science fiction YA, and carries around a record player and her adorable cat. She isn't afraid to challenge Sam when navigating to freedom, all while learning to navigate her own changing emotions.

This unconventional Western will have you riveted until the last frame. The Keeping Room follows Augusta and Louise, two sisters left alone at their Southern plantation while (presumably) the men in the family have gone off to fight in the Civil War. They only have one slave left to help them, Mad, who helps the women take care of the land and survive as best they can. Watching these women defend themselves when rogue soldiers invade their home amps up the tension but makes for a compelling watch.

An Unmarried Woman is a revelation. The late Jill Clayburgh is doing some of her best work in the story of a divorced woman piecing her life back together after a shocking divorce from her longtime sweetheart. Clayburgh is so honest and emotionally vulnerable as Erica; she makes for compelling viewing. The best moments are Erica's frank and hilarious conversations with her best friends and later, her daughter. Don't miss this one.

Tess McGill is the ultimate Working Girl. Hungry to rise to the top of the corporate ladder in late '80s NYC, Tess sees the opportunity to becoming the high-powered exec she has dreamt of becoming since going through business school. Both you and your mother will be cheering for Tess to jump over every obstacle — and Harrison Ford ain't half bad as gruff cad Jack Trainer.

Featuring the inimitable Spencer Tracy and Katharine Hepburn, Desk Set is surprisingly feminist is how it handles women in the workplace and older women finding love. Hepburn plays the head of a television network's research department and Tracy is the man sent in to install a computerized catalogue that would eradicate the need for the four women working in the department. Hepburn is at her feistiest as Bunny Watson, proving brains are better than beauty and that women can definitely hold their own in the workplace.

These films are perfect for a nice night in with your mom.

More like this
15 Romantic Movies On Netflix That Are Perfect For Snuggling Up On The Couch
By Rachel Simon and Grace Wehniainen
What’s New On Netflix: 'Stranger Things' & 'Mean Girls'
By Arya Roshanian
What’s New On Netflix: The Return Of 'The Umbrella Academy'
By Arya Roshanian
Here’s Everything Coming To & Leaving Netflix In July
By Grace Wehniainen
Get Even More From Bustle — Sign Up For The Newsletter