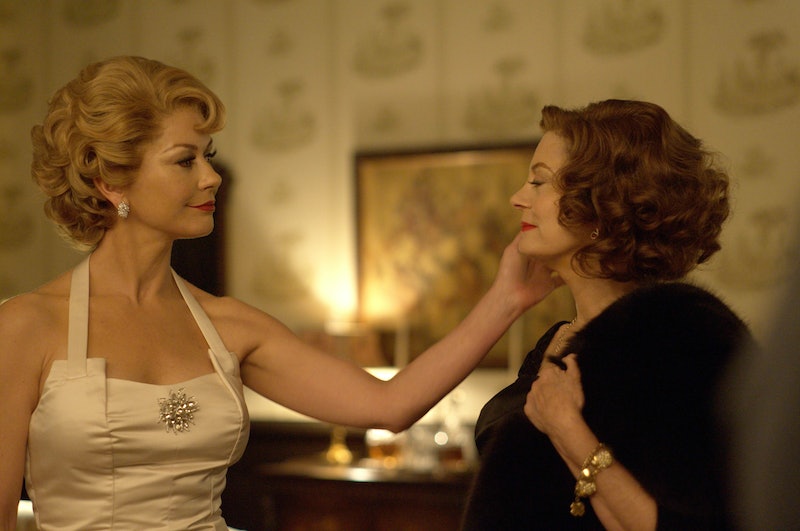 Despite the fact that Bette Davis and Joan Crawford were both tremendously talented and successful actors, they both struggled to find work after turning 50. Ryan Murphy's FX series Feud addresses the sexist, ageist industry of the 1960s — but the very reason he was inspired to make the series in the first place is because, depressingly enough, there has been very little progress over the past five decades. Throughout the series, a number of Feud quotes completely skewer Hollywood sexism and ageism — in fact, it's rightfully addressed more than once in each episode.

But, as Murphy explained in SiriusXM town hall discussion, the series is also meant to address modern issues. As reported by Entertainment Weekly, the showrunner stated:

“I wanted to make the show because I wanted to tell a story about modern issues that are facing women today, and, oddly enough, nothing’s changed. You’d think things have progressed. They have not... So really it’s a show about sexism and misogyny, and why aren’t women being paid as much as men, and why in our culture we have ‘It’ girls and not ‘It’ boys and why do women feel there’s only room for there to be one successful woman at a time."

For example, women accounted for just 29 percent of protagonists in 2016's top 100 films, according to the Center for Study of Women in Television and Film. Granted, this was a seven percent increase compared to 2015 — but it shows the tremendous gender disparity that continues to plague female actors.

These 11 Feud quotes skewer sexism and ageism with wit and sass, but they also address and important — and relevant — issue.

1. "Men may have built the pedestal, but it's women who keep chipping away at it until it comes tumbling down."

Joan pulled no punches when she responded to Hedda Hopper's comment that "men built the pedestal, darling, not me. There's only room for one goddess at a time."