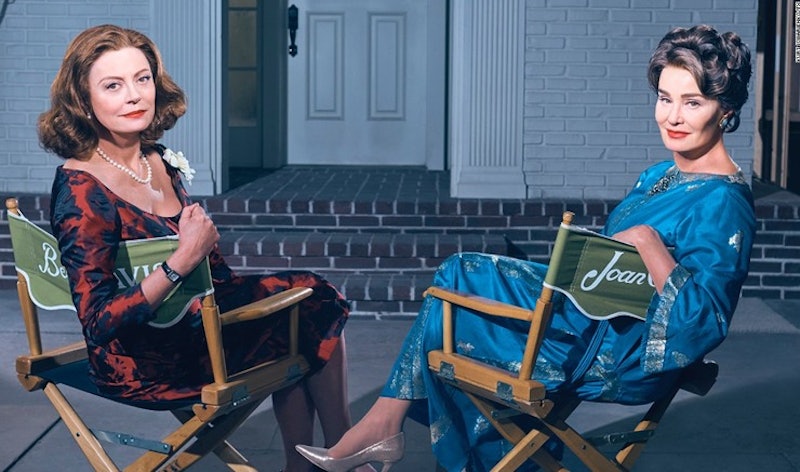 It's a unfortunate adage that I hear every day while living in Los Angeles: It's hard for women in Hollywood to do anything after a "certain age" — a variable that is usually defined by various magic numbers between 25-30. And that was even the case back in the 1960s — FX's Feud shows how Bette Davis and Joan Crawford's ages affected their film What Ever Happened to Baby Jane? Both actors were in their mid-50s when tackling the 1962 classic, and Davis received an Oscar nomination for her role as Jane — but the movie almost didn't get made due to ageism and sexism in Hollywood in the 1960s.

FX's Feud dramatizes the real-life Hollywood rivalry between actors Davis (Susan Sarandon) and Crawford (Jessica Lange) as they worked together on Baby Jane. The first episode of the series shows Crawford in her mid-50s and frustrated about her limited options for movie roles. "I am not playing Elvis' grandmother," she tells her agent Marty in Feud. Marty tells her, "That's all they're making ... The roles just aren't out there." Davis is facing the same issue when Crawford visits her backstage at a Broadway play. "No one's looking to cast women our age, but together, they wouldn't dare say no," Crawford tells Davis, as she offers her rival the lead role in Baby Jane.

What Ever Happened To Baby Jane? is a hard film to summarize, because it's so unique in story and tone. On the surface, it's a horror and thriller about an aging actress who keeps her wheelchair-bound sister holed up in an old mansion. Look deeper and you'll see a fascinating portrayal of a longstanding rivalry between two women — and it's super meta, considering Davis and Crawford's own years-long feud. A movie starring two women above age 50 is difficult to make now in 2017, so I can't imagine how difficult it was to make in the 1960s. A recent study by the USC Annenberg School found that there were only only 33 speaking roles for women defined as age 60 or older in the Oscar-nominated films of 2014-2016 — and none of them were leads.

"I wanted to make [Feud] because I wanted to tell a story about modern issues that are facing women today, and, oddly enough, nothing’s changed," Feud creator Ryan Murphy said in SiriusXM town hall discussion last week, according to Entertainment Weekly. "You’d think things have progressed. They have not."

As the first episode of Feud depicts, Baby Jane was not an easy movie to make in Hollywood. Eventual Baby Jane director Robert Aldrich (played by Alfred Molina) scoffs at the idea of the movie at first — and only decides to take on the film once his savvy assistant Pauline (Alison Wright) tells him that the movie would be a low-budget project. "Even better, Baby Jane is one set," Pauline tells him. "It's a very small cast. You could have final cut. You could produce this yourself." According to IMDb, the real-life budget for Baby Jane was $980,000. But even with those factors on his side, Robert feels resistance from studio execs his casting of Crawford and Davis as the leads — which is exactly what happened in real life.

According to the book Bette & Joan: The Divine Feud by Shaun Considine, Aldrich said that four major movie studios declined to even consider the project or read the script due to the lead actors' ages. Jack Warner of Warner Bros. rejected the film, famously saying, "I wouldn't give you one dime for those two washed-up old" actors, according to the Daily Mail. Eventually, the indie production company Seven Arts would finance the film, but on what owner Elliott Hyman called "very tough terms, because it's a high risk venture," according the Bette & Joan book. Warner agreed to distribute the film after some initial resistance, but Baby Jane was not allowed to film on the studio's own sound stages, detailed the book. Instead, Whatever Happened to Baby Jane? was shot at the Producers Studios lot, which is known today as Raleigh Studios in Los Angeles.

This "high risk venture" went on to become a beloved classic, earn five Oscar nominations, gross $9 million worldwide at the box office in 1962, and launch a trend of films similar to it in the years following — giving older actors a chance to shine in lead roles. I can't help but notice how Crawford and Davis' struggles with Hollywood ageism and sexism parallel the current fight for more representation for women in Hollywood. Variety reported in 2015 that women-driven movies do very well at the box office, but still there aren't many being made — only 29 percent of 2016 movie main characters were women, according to a study by San Diego State University.

Sadly, it may seem like not much has changed since Crawford and Davis made Baby Jane, but they showed to Hollywood that women of all ages have a place on the big screen. And that's being proved once again in 2017 by Feud.