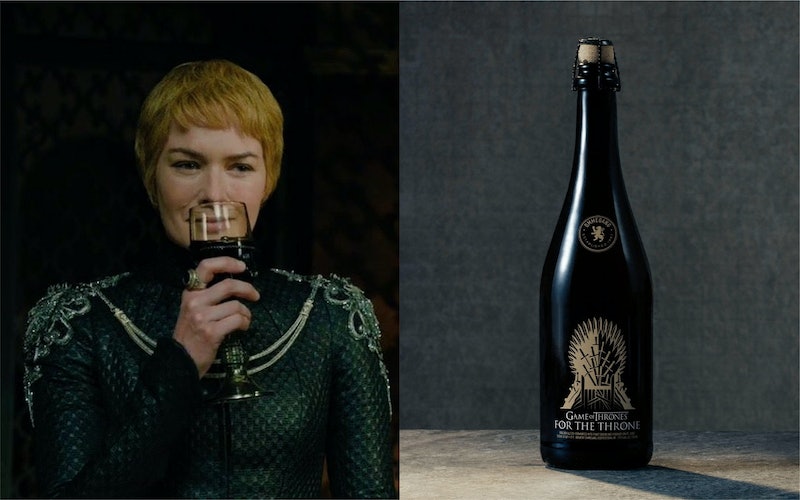 We’re in the home stretch now, team: The eighth and final season of Game Of Thrones is set to begin airing on April 14. If you’re anything like me, you’re already making your viewing party plans — which, of course, means adding a few Game Of Thrones-themed wines, beers, and other assorted adult beverages to the menu. Happily, there are plenty of picks to choose from, so for folks who drink and know things, it shouldn’t be too tough to find something to your liking.

HBO has kept a pretty tight hold of the licensing rights to Game Of Thrones throughout the show’s entire run. As such, the somewhat unexpectedly expansive GoT-themed booze collection generally hails from only three primary sources: Ommegang Brewery, Vintage Wine Estates (more specifically, winemaker Bob Cabral), and various whisky distilleries that fall under the purview of Diageo. But although the sources have been limited, different varieties of boozy beverages have been churned out on the regular, resulting in a collection that spans the breadth of Westeros itself.

Not all of them are still available, of course; Ommegang’s beers in particular, for example, have all been limited releases, and since they’ve been at it since 2013, you’d be hard pressed to find a lot of the older runs now. Availability of all of the various GoT booze picks also might depend on where you’re located. Still, though — enough options remain in circulation that no matter what your taste in themed alcohol might be, you’re sure to find something that will appeal to your palate. These 11 picks can still be located, so get ready to make like Cersei Lannister and call for more wine.

This blend features six different varietals, but it’s primarily petite sirah and zinfandel. The result is dry and robust, and apparently “often served at feasts, paired with hearty meats, roasts and blackbird pie, poured at Small Council sessions,” per its official description. If, y’know, you want to work within the series’ fictional framework.

2. For The Throne Beer

Ommegang’s latest offering, For The Throne, launched at the brewery itself on March 8; however, it won’t arrive in stores until April — just in time for Season 8’s premiere. It sounds a little like those beer-wine hybrids we’ve been hearing a lot about lately — made using “co-fermenting” and “traditional ingredients with juices normally destined for fine wines,” as the press release puts it, it’s a variety Ommegang calls an oenobeer. Honeysuckle, toasted grain, pear, apricot, sweet malt, and honeydew make up the main flavors.

3. King In The North Beer

King In The North
Total Wine

A barrel-aged, American double/imperial stout coming in at 12 percent ABV, the King In The North is part of Ommegang’s Royal Reserve Collection. It’s perfect for toasting Jon Snow, imperfect leader though he may be.

Not going to lie: I am more interested in this blended Scotch’s bottle than I am in the actual Scotch. According to its product description it “features a frosted bottle sleeve that reveals hidden design when exposed to the cold.” As someone who grew up when temperature-sensitive, color-changing gimmicks were at their height (novelty mugs! Hypercolor t-shirts! FREEZY FREAKIES! https://www.bustle.com/articles/130753-15-winter-struggles-all-90s-kids-know-because-snow-in-your-moon-boots-was-the-worst), that kind of packaging is absolutely my jam. Then again, I am also not really a whisky person, so the Scotch itself might do it for you where it doesn’t for me. It does sound tasty; inspired by the White Walkers, it apparently “offers incomparably rich seasonal flavors of vanilla, red fruits and orchard fruits that are perfect for sharing at the next premier, finale or any occasion.”

Described as an “elegant white” that’s “favored by those who prefer a golden, refined quaff,” the official Game Of Thrones Chardonnay sounds like what I imagine the series’ oft-mentioned Arbor gold tastes like. It features “aromas of stone fruit and white blossoms,” notes of peaches, apricots, tangerines, Meyer lemon, baking spices, and honey, and a hint of oak (of course).

6. Queen Of The Seven Kingdoms Beer

Another of Ommegang’s Royal Reserve brews, this one is named for Cersei Lannister. Accordingly, it’s “a special blend of Belgian sour and blonde ales that remind us that to Cersei, everyone who isn't us is an enemy.” For the curious, it’s 6.5 percent ABV.

Daenerys Targaryen’s Royal Reserve beer is, appropriately, a blend of a smoked porter and a Belgian kriek. 6.5 percent ABV, its flavors include tart cherry, semi-sweet chocolate, and, of course, more than a touch of smokiness.

There’s a reason the cab sauv is more than twice as expensive as every other option in the Game Of Thrones wine collection: It’s meant to be the flagship wine. Blackcurrant, briar, and Tahitian vanilla make up the main notes; there’s also a bit of oak and cocoa. Maybe this is what we’d be able to expect from the Dornish red often spoken of in the series, if it were real.

Industry giant Diageo recently tasked eight of the distilleries that distribute under its wider umbrella with creating eight different single-malt Scotch whiskies — one each meant to represent the Houses of Tully, Stark, Targaryen, Lannister, Greyjoy, Baratheon, and Tyrell, as well as the Night’s Watch. They’re a little tricky to find these days — and, as a result, they’re pretty pricey when you do manage to track them down — but if you’re both a single-malt and Game Of Thrones fan, they’ll be well worth. Heck, even the bottles look cool.

A juicy, spicy wine, the Game Of Thrones pinot features notes of black cherry, blackberry, vanilla, cocoa, leather, and spice. Sounds like my kind of wine.

Hand Of The Queen
Total Wine

Tyrion Lannister may not be royalty himself, but as the Hand of Daenerys Stormborn of the House Targaryen, First of Her Name, the Unburnt, Queen of the Andals and the First Men, Khaleesi of the Great Grass Sea, Breaker of Chains, and Mother of Dragons — and the fella who drinks and knows things — he’s earned his own Royal Reserve beer from Ommegang. A barleywine, Hand Of The Queen is 11 percent ABV and with hints of brandy-soaked raisins, dark fruit, and apricots.

Game Of Thrones Season 8 debuts on HBO on April 14. Get ready for the final clash!