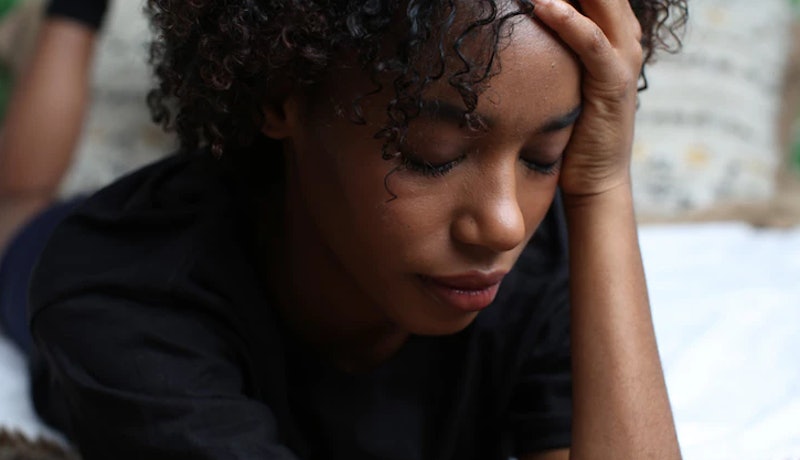 Have you ever suspected that your mom (or dad) might be a toxic person? If so, then you've probably noticed a few habits that many toxic moms have in common. But befofe we get into the signs, let's first talk about what it might feel like to have a truly toxic mom — because it really is so much worse than simply not getting along.

As psychologist Dr. Perpetua Neo says, "A toxic mother is an energy vampire who cannot and will not love you or care for you, no matter how she ticks some boxes that allegedly look like she cares ... She is exhausting, frustrating, and has no qualms about hurting anyone, because she thrives on the attention and drama."

Clearly, if you have a toxic mom, then your relationship with her will likely be strained. But her actions can also leave you wondering why she is the way she is — and if it's somehow your fault. That's why it's important to remember that toxic parents are often that way because their parents were toxic. But there is a genetic element, as well. "Most toxic mothers are either Dark Triad personality types (narcissism, psychopathy, machiavellianism), or have a lot of these traits," Neo says.

Whatever the cause, if you're dealing with someone like this, it's often a good idea to seek outside help. A therapist can teach you how to better cope with your mom, how to help her, or even how to (in extreme cases) get her out of your life completely. Below, a few habits that are common in all toxic moms — and toxic parents in general — that might mean it's time to do just that.

1. They Always Bring The Attention Back To Themselves

Toxic moms have a knack for bringing all the attention back to themselves, because they just can't deal when someone else is in the spotlight. "They might throw tantrums or be passive-aggressive," Neo says. And they might make you feel bad for talking about yourself for a second, by saying awful things like, "Why did you come over here to visit if you only want to talk about yourself?"

2. They Get Weirdly Jealous

While you'd think a parent would outgrow the jealousy stage, it can prove difficult for toxic ones to see their kids as anything but competition. "Everyone is a rival to them — they are incapable of love and empathy," Neo says. So if you get a new job, or seem happy in your relationship, you might notice your mom prickling with disdain.

3. They Belittle And Critique You

If your mom is struggling with her own issues, she might take it out on you in the form of belittling remarks or harsh critiques. "I call them 'digs,'" says women's mental health expert Kelley Kitley, LCSW, in an email to Bustle. If this is your mom's go-to toxic habit, it'll feel like she's saying things just to irritate you. And she is.

4. They Stir Up Fights With Your Fam

Does your mom pit you and your sibling against each other, or stir up fights? If so, this is a toxic tactic known as triangulation. "They'll find a way to make sure that they talk to each child separately, raise a few select/exaggerated/false nuggets of information, and raise their children's hackles," Neo says. This is, again, all thanks to your toxic mom's love of drama, and her desire to be the center of attention.

5. They Play The Victim

Another rather annoying habit, that's common among toxic moms, is playing the role of the victim whenever possible. "A toxic mom might gain most of her attention by playing 'woe is me, nobody loves me,'" Neo says. "Or 'I worked so hard and I am alone now, you guys are so ungrateful.'" Comments like these are designed to pull at your heartstrings, and make everything about her.

Again, if your mom is narcissistic, she likely won't be interested in anything you have to say. And you likely won't feel comfortable chatting with her, or going to her with your problems. As parenting expert Thomas Gagliano, MSW says, "A toxic parent never creates an environment where their child feels safe to discuss their feelings ... In these conversations, the child may feel manipulated, judged, or dismissed so they tend to not have the conversation." Sound familiar?

A big issue with toxic moms is a total and complete lack of boundaries. As marriage and family therapist Carrie Krawiec, LMFT tells me, your mom might show up at your apartment unannounced, or ignore any requests you've made for more space, less phone calls, etc. This is not only totally disrespectful, but also shows that her main focus is getting attention. And that's not OK.

While it can be difficult for parents to transition from viewing you as their baby, to finally accepting that you're a bonafide adult, it seems toxic mothers struggle with this the most. As Krawiec tells me, your mom might take over tasks that you should be doing yourself — like doing your dishes, or showing up to clean your house — even when you've asked her not to. While it sounds sweet, it all has roots in control and disrespect. And her own underlying issues.

9. They Constantly Let You Down

We expect a lot from our moms, so it's OK if she isn't available to you 24/7. But if she has a history of letting you down because "she just can't deal," it might mean she has some underlying issues going on. And that can lead to a toxicity in your relationship. As therapist Jennifer Beasley, LPC says, "A child relies on their mother for direction, safety and comfort, and hearing the words, 'I can’t handle this' are disappointing and terrorizing for the young, but also for the adult child." If she's done this all your life, it's likely left quite the mark.

Another toxic habit that can upend your life, and create issues within your relationship, is unpredictability. As Beasley says, "Their mother can be safe and secure one minute by bringing control to an out -of- control family moment, to within minutes, creating chaos and being emotionally out of control themselves."

11. They Need To Be Soothed

Of course you should soothe your mom, if she's going through a tough time. But if it feels like that's all you do — and you never get any comfort in return — consider the situation toxic. "When a child goes to their mother for comforting and finds themselves soothing their mother instead, it's evident toxicity exists within the relationship," Beasley says.

Going to therapy can help you sort through all the ways toxic habits like these might have affected you, while providing you with the tools you'll need to deal with your mom in a healthier way.