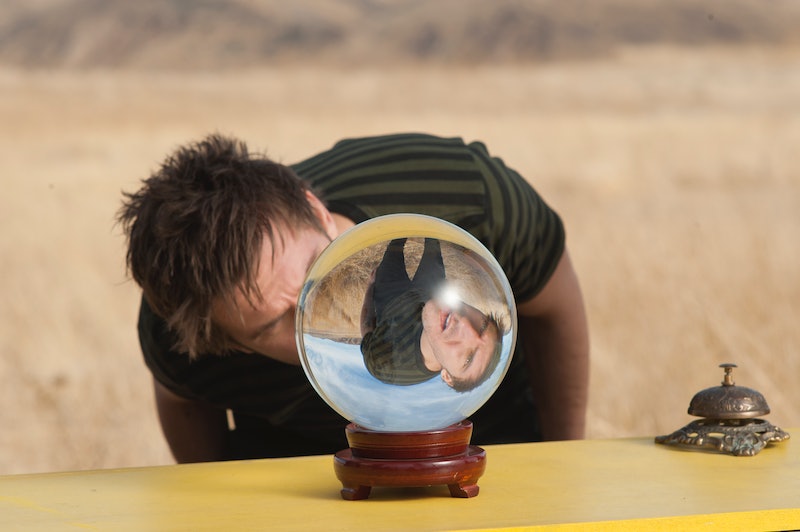 When Legion returned for Season 2, it upped the ante on its already confusing plot. But now, there's a disembodied voice who provides context in every episode. Fans don't know, however, who (in the show's reality) this voice belongs to. These Legion narrator theories could explain the narrative source of these lengthy monologues.

In any other series, an unnamed narrator would simply be there in order to deliver exposition or provide a look into the characters' interior thoughts. Having a narrator at all seems to defy Legion's mission to be as incomprehensible as possible. But so far, the narration hasn't done much to explain the show's twisted timelines or even reveal what exactly David was doing during the year that he lost.

The unnamed, off-screen narrator is voiced by Jon Hamm, who's not only used his recognizable voice to play Don Draper on Mad Men, but also as the voiceover artist in various commercials. The psychological concepts the narrator has explained so far have suggested that even though David discovered in the beginning of Season 1 that he's not schizophrenic as he previously believed, Season 2 will continue to explore the concepts of mental health and "madness."

This narrator's monologues so far could have easily been given to Oliver, Melanie, Clark, or any other number of already established characters. So there may be more to this anonymous authority than just an offscreen voice. Here are a few theories about who the Legion narrator may actually be:

If the narrator turns out to be any existing character, the Shadow King, who has appeared in his Amahl Farouk identity this season, would be a natural guess. The Shadow King could easily exist as both the narrator and Farouk, since he can manipulate reality for his victims at his whim. And he's spoken with the voices of Lenny and Oliver before.

Of course, it's possible that the Shadow King isn't the only malignant entity that's infected David's mind. Perhaps there's a presence that the audience hasn't even met yet, who will be revealed as another intruder in David's powerful brain.

And while Dan Stevens has already played David in several different time periods, it's possible that the narration is coming from another version of David, maybe after he accepts that he's both mentally ill and a mutant.

It's possible that the narrator's lessons are actually coming from a character who lives in the future — possibly a version of Syd's future — who is explaining how that future plague developed.

As both the comics and a few pivotal scenes in Legion Season 1 confirmed, David's father is Charles Xavier, leader of the X-Men. So far, he hasn't appeared onscreen, but this narration might be the first hint of Professor X being folded into the series.

6. He's From A Different Reality

The version of Syd who David met up with in the future is hoping that she no longer exists because David can change the course of history and stop her apocalyptic future from happening. Perhaps this narration originates in some form of the future that won't even exist by the time Season 2 is over.

Who better to understand the problems of the mind than a psychic? David has worked with a few other psychics before, like Ptonomy, but he's never had a real mentor with psychic abilities before. Considering the narrator's understanding of different creatures' powers of perception and his comprehension of how the human mind works, maybe he's another mutant who could help guide David.

Most of the narration so far has centered on the origins of delusional thoughts. Perhaps this voice is going to represent the delusion as it grows in David's mind. It's not clear how delusion is going to impact the season as a whole, but if David begins having persistent, intrusive thoughts with the voice of the narrator, the audience will know that these words are not to be trusted.

So far, the character has only communicated through their mustachioed androids, but the Admiral must have an inner monologue of some kind. And maybe David will discover that it sounds a lot like the narration that's been opening each episode.

The teeth-chattering plague is still unexplained. The Shadow King is a a probably culprit, and David could also be at fault, but maybe the plague isn't the responsibility of any previously introduced character. Maybe it isn't a character at all who made this happen at all — maybe the plague really is just some kind of infection that's spreading to different minds, personified by the narration.

All of these theories aside — and there's quite a few of them — it's possible that the intent of Hamm's narration is to do nothing more than guide the audience through the maze-like territory of Legion Season 2. It's possible, of course, but given this show's love of twisting TV conventions, it's certainly not likely.

As the season goes on, Legion may explicitly reveal the personality behind this voice — but by now, fans should know not to expect any easy answers from this Marvel series.