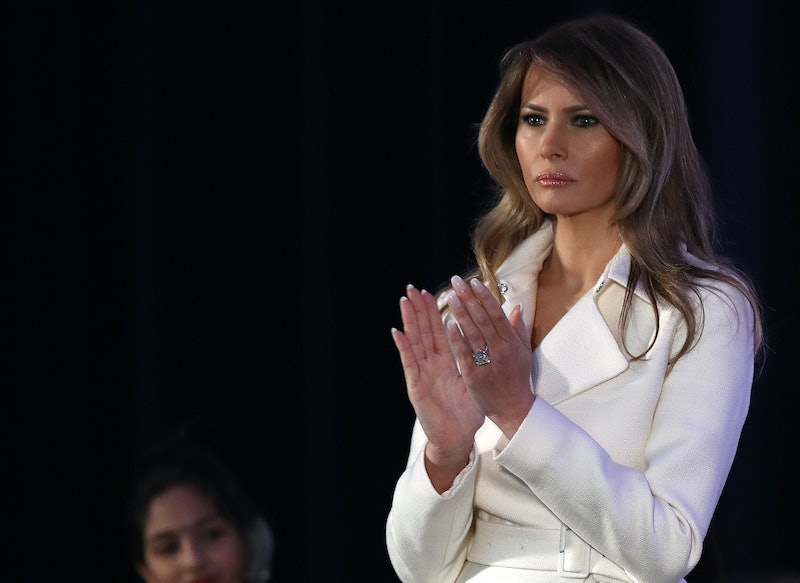 On Monday, the White House released the official portrait of the First Lady. The good news is that it's much better than her husband's official White House photo, in which the president looks thoroughly unhappy and dour. Nevertheless, almost immediately after the picture was released, Melania Trump White House portrait memes started flooding Twitter.

The issue isn't Melania, or anything she's doing in the photo. In my opinion, however, the portrait looks a lot more like a glamour shot, or perhaps a bit of promotional material from the 1980s, setting it apart stylistically from some of the more traditional first lady portraits. The background looks like something out of a department store catalogue, and the ultra soft focus led many to suspect that the picture was photoshopped.

Having said that, Melania's picture is undoubtedly a major improvement over that of the president. In his official White House portrait, which he's also adopted as one of his Twitter avatars, Donald Trump looks concerned and exaggeratedly serious. To his credit, he didn't flash his signature thumbs-up sign, but still, it's an odd portrait.

And so is Melania's, albeit in very different ways. Here's what the Internet had to say about the first lady's first portrait.

Because she doesn't live in the White House.

2. A Portrait Worthy Of A Catalogue

Although maybe not, because realistically, when is the last time Melania Trump went to JC Penney?

3. There's A New Detective In Town

I'd watch this show.

4. But Really, Where Was It Taken?

The addition of Muppet Babies to the White House would certainly be an improvement on the status quo.

All that's missing is some drum machines and reflective chrome-style text.

It is a pretty darn blurry photo.

That's not actually the portrait, just to be clear. But it's not far off.

What genre do you think it would be? R&B? I'm going with R&B.

This may well be the first time anyone has likened Melania Trump to Adam Sandler.

I mean, couldn't they have at least used a more recent photo?

11. Breaking All The Rules

It's an unconventional White House.

Again, Melania's portrait isn't horrible. It's just a bit odd. But at least people are having fun with it.