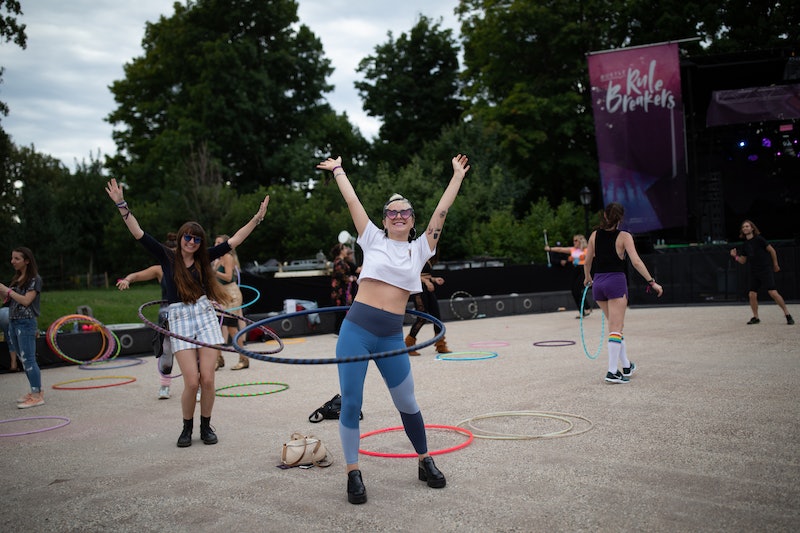 Some rules are made to be broken. Standards won't change unless they're first challenged, so you might even say it's your duty to break norms. Rosa Parks said it best: "You must never be fearful about what you are doing when it is right." To get a feel for how modern women choose to be transgressive in their lives, we asked attendees of the Bustle Rule Breakers event on Saturday about the rules they're most passionate about breaking.

Nearly every person brought up a rule with a gendered component. Obe, 29, who's from Ghana, tells Bustle she "grew up very religious" and her mother taught her that she needed to get married, have kids, and have a more traditional family life. "I'm actually not going to do any of that," Obe says, laughing. "I say it all the time, I'm like, 'I'm not getting married,' and [my mom] just starts praying."

Obe continues, "I've been working hard my whole entire life. I just bought my own place, I have a really good job, and I just feel like I want to live for me. I don't want anyone to ever feel like they own me, or own a part of what I've done, 'cause I did all the work myself. So if you come in, sure, we can date or be partners, but I'm not marrying you."

Others also spoke about expectations that bother them. Monica, 22, says that many people conform to the standard that "you have to please other people in how your outside appearance is." She explains, "[It's like] you can't just walk around and feel comfortable, like [it's] a rule [that] you have to feel uncomfortable if you're not adhering to someone else's guideline." She also mentions that she avoids certain outfits when she knows they're going to elicit stares or comments.

Ciera, 26, recalls experiences from her grade school, which she says "believed in respectability politics quite a bit." She wasn't allowed to wear her hair in braids; she says she got into her first fight with someone who'd relaxed her own hair and was making fun of her. Many of the rules felt arbitrary to her, she says — especially one from art class that involved coloring a "certain amount of shells brown." When she made them green, instead, the teacher gave her a demerit.

"I'm not going to do something just because I'm told to do it," Ciera says. "If I’m going to do something, I really have to believe in it and also understand it, too." Funnily enough, even though she "caused a ruckus" in school by disobeying teachers, she's now a teacher herself. She says that she wants to "be a model for girls of color" and encourage them to be true to themselves more than she was encouraged to be as a student.

"You can't push them to conform to you," she says. When one of her own students breaks a rule, she says she doesn't shame them. "I pull them out for a discussion after class to get a sense of, where is that coming from? We just talk it out."

Other people brought up economic concerns. "I'm passionate about breaking capitalism," says Myia, 29. "Our system is built so that the rich get richer and the poor stay poor forever." Bree, 28, agrees: "Most people don't even have three months of savings to live off of in case they lost their job or got sick. They're getting left behind and no one does anything about it."

On another work-related note, Iemi, 28, describes how she made a choice after graduating college to prioritize "personal" needs over "career" concerns: "I graduated for film so it would have made sense for me to stay in New York, but I needed to be around my dad at the time so I moved to be around him."

Andea, 35, and Joanne, 43, were frustrated with the unspoken rules constraining their professional lives. They spoke about the "boys' club" that exists in their work environments, which often involves them being forced to submit to what their male counterparts want to do.

If a voice is to be respected, Joanne says, "it has to be a male voice." She says that when she expresses ideas, people will brush them off. But then "if someone else says the same exact thing, they're like, 'That's a fantastic idea!'" If she tries to point that out, she says, her coworkers often accuse her of getting upset. "I'm not upset, I'm just literally telling you that what I said is what he said, and you're giving him kudos for it."

Andea agrees. "Generally speaking, men for so long have just had whatever they want, and so whether that's in relationships or work or whatever, it's time for women to speak up." It's time, she tells me, for "breaking rules like how much you should get paid and what you should wear at work," and basically getting rid of the "male chauvinistic nonsense that's been going on for so long."

Alex, 34, had a similar complaint. In her own field of work, she says she tries not to follow the implicit standards of "not being too outspoken or knowing to take my turn" because she's female. Rules like these, she says, are "holdovers from antiquated power structures that don't apply to modern life or haven't taken into account all kinds of different lived experiences."

Annie, 23, and Phoebe, 22, neatly summarized how they distinguish between rules that are useful and rules that should be violated. Annie says that the latter are "those that try to dehumanize and erase you."

"Any rules that make you feel less than, smaller, and that you don't have a right to express yourself are ones that are meant to be broken," she says. Phoebe agrees, adding: "Any rule that's against your personhood is one that you're allowed to break."