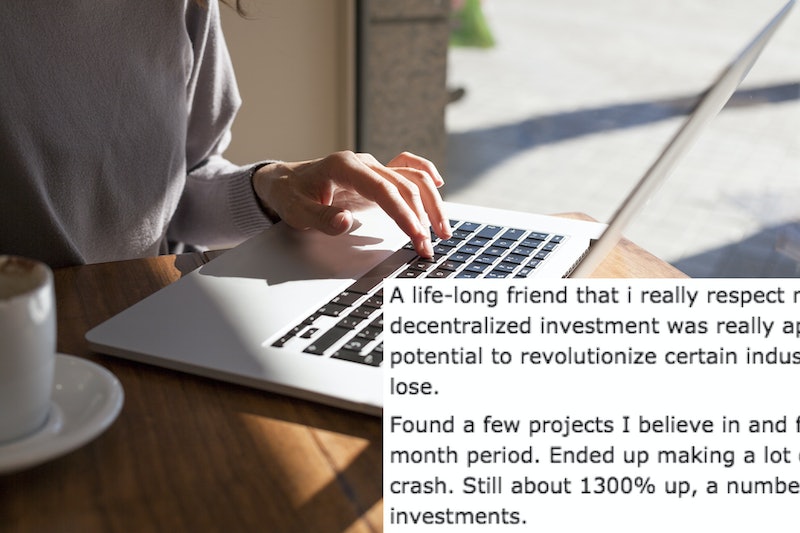 In 2017, you couldn't throw a virtual stick without hitting an article about the meteoric rise of bitcoin. But while its skyrocketing value may have encouraged many people to buy the digital currency last year, that's not the only reason people invest cryptocurrency. Some of its strongest supporters believe that it can prevent credit card fraud, give people a safe place to store their money, or even protect the economy by mitigating the effect of printing too much money. Then again, judging from a recent Ask Reddit post about cryptocurrency, some people just do it on a whim and hope for the best.

If you're still stuck on the "wait, what is cryptocurrency?" setting, you're not alone. Despite being all over the news recently, it was mostly the purview of technology lovers until last year. The general idea is that digital currency is decentralized, meaning it doesn't involve banks or names, and it encrypts each transaction. (Instead of banks, the system is maintained by volunteers, who sometimes charge a fee to work faster.) These transactions are stored in a "blockchain" — basically, a public, decentralized ledger. The public nature is actually a good thing, because any discrepancies with an individual account can be compared to other copies of the chain.

Some believe that cryptocurrency is the future of money; others are more skeptical. Financial institutions tend to fall into the latter category. According to Business Insider, China began investigating bitcoin exchanges in 2017 for suspected "market manipulation, money laundering, unauthorized financing and other issues," and JPMorgan CEO Jamie Dimon called it a "fraud" in September. At the same time, though, Japan has made bitcoin a legal currency.

So far, we'll have to wait and see if the cryptocurrency craze fizzles out or ends up being the norm. If it works, the following people who invested in cryptocurrency now will be laughing all the way to the blockchain.