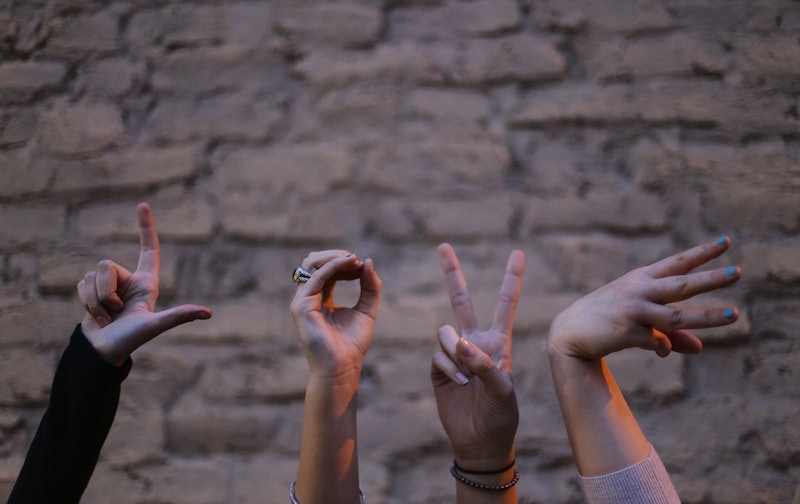 One of the things I find most inspiring is women openly supporting and lifting each other up. With so many obstacles on the road to gender equality, we don't need to create another one by getting in our own way — despite our culture's nasty habit of trying to pit us against each other. These quotes about women supporting women are inspiring examples of how we can help propel each other forward instead of holding each other back. By drawing on support from other women, you can harness the collective energy of your peers to help you feel less alone, because it's rough out there.

Personally, some of the worst sexism I have experienced has been from other women. This may sound weird, but in our patriarchal society, many women adhere to and help enforce an outdated set of gender norms. If you've ever had another woman tell you how to behave in a certain situation so you don't upset a man in power, or you've ever been disciplined or admonished by another woman for doing that something that offends a man in a position of power, then you know what I am talking about.

An article in The Atlantic explains that feminism falls into two roles — the Righteous Woman and the Queen Bee. The Righteous Woman has a basic belief that women should have each other's backs, no matter what.

The Queen Bee subscribes to the notion that women simply can't get along. While this is an oversimplification, its basic concept is interesting.

I know we can do better. Women need to embrace intersectional feminism, the understanding of how women's overlapping identities — some of which include race, class, ethnicity, religion, sexual orientation, and more — impact the way they experience oppression, and discrimination if we're ever going to move the needle forward toward equal rights.

These quotes about women supporting women are an example of how we lift each other up instead of helping hold each other down.

"I love to see a young girl go out and grab the world by the lapels. Life’s a bitch. You’ve got to go out and kick ass."

“I guess what I’m saying is, let’s keep lifting each other up. It’s not lost on me that two of the biggest opportunities I’ve had to break into the next level were given to me by successful women in positions of power. If I’m ever in that position and you ask me, 'Who?' I’ll do my best to say, 'You' too. But in order to get there, you may have to break down the walls of whatever it is that’s holding you back first. Ignore the doubt — it’s not your friend — and just keep going, keep going, keep going.” —Talking as Fast as I Can: From Gilmore Girls to Gilmore Girls, and Everything in Between

"I hope that my presence on your screen, and my face in magazines may lead you young girls on a beautiful journey, that you will feel validation of your external beauty, but also get to the deeper business of being beautiful inside."

“We ask justice, we ask equality, we ask that all the civil and political rights that belong to citizens of the United States, be guaranteed to us and our daughters forever.”

“The way to achieve your own success is to be willing to help somebody else get it first.”

“I just love bossy women. I could be around them all day. To me, bossy is not a pejorative term at all. It means somebody’s passionate and engaged and ambitious and doesn’t mind leading.”

"I think every band should have a girl in it."

"A woman with a voice is, by definition, a strong woman."

“I will keep writing about these intersections as a writer and a teacher, as a black woman, as a bad feminist, until I no longer feel like what I want is impossible. I no longer want to believe that these problems are too complex for us to make sense of them.” — Bad Feminist

“How can I create opportunities for women to move past the local level? There are all these barriers [in the music business] to entry, and women don’t graduate in the same way, because there aren’t the same opportunities. It’s very skewed. I’m trying to come up with ways to create a critical mass, a scene. Galvanizing is really important. If you’re all doing something together, you have a lot more momentum. And you meet each other and you create this social economy of people helping each other. So it’s not as lonely. And it’s really fun. I mean, when you have this excuse to just meet and talk to these smart women all day long?"