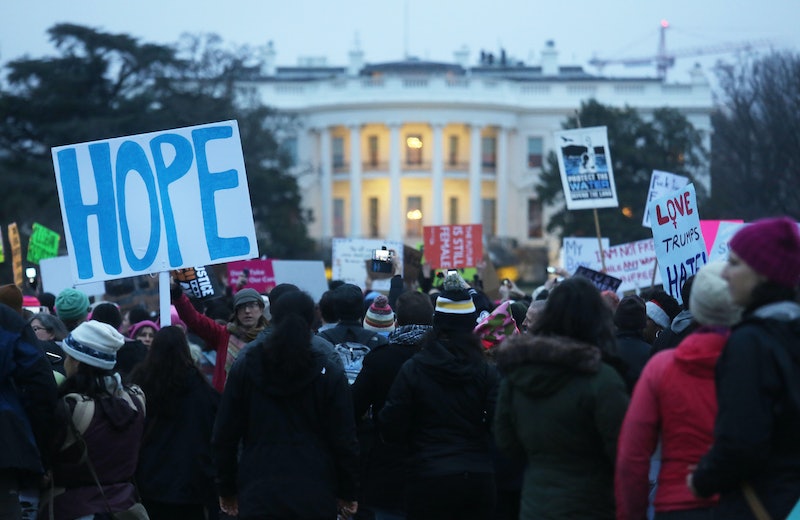 The Women's March demonstrated many things: That millions of men and women are angry at the current state of events, that they demand equality under the new administration, and that it's long past time for intersectional feminism to become the norm. In fact, as we enter into the nationalist administration of Donald Trump, it's more important than ever.

Although you'd think that a movement about equality would at its core be devoted to giving equal weight to all its members, feminism has historically emphasized the struggle of a particular type of woman — one who is white, middle-class, straight, cisgender, and able-bodied. Meanwhile, other perspectives were left behind; for instance, while women technically received the right to vote in 1920, women of color were unable to exercise that right for decades afterward. However, the 19th amendment is still celebrated for giving all women the right to vote, even though that's actually incorrect.

That's just one example of the way identities are irrevocably intertwined. In 1989, professor Kimberle Crenshaw put a name to the concept: intersectionality. Put simply, intersectionality describes the idea that everyone experiences the world differently based on their combination of identities. Crenshaw's 1989 paper specifically applied the concept to the intersection of race and gender; in the decades since, though, intersectionality has come to encompass the vast array of identities that exist in the world. A straight, black woman experiences sexism and racism; a white, queer woman experiences sexism and homophobia — you get the idea. It makes sense; but as Crenshaw pointed out in her paper, we're taught to consider discrimination one source at a time, which is a problem.

"The failure to embrace the complexities of compoundedness is not simply a matter of political will, but is also due to the influence of a way of thinking about discrimination which structures politics so that struggles are categorized as singular issues," she wrote.

This way of thinking has been changing recently, but it's certainly not going away overnight. The aforementioned Women's March is an excellent example of how "white feminism" persists even today. Initially, the event was led by a group of almost exclusively white women; what's more, it borrowed its original name, the Million Women's March, from an enormous 1997 protest for black women's rights. After facing criticism, the 2017 event changed its name to the Women's March on Washington, people of color were welcomed to leadership positions, and organizers released what amounted to a statement on diversity.

"The rhetoric of the past election cycle has insulted, demonized, and threatened many of us — immigrants of all statuses, Muslims and those of diverse religious faiths, people who identify as LGBTQIA, Native people, Black and Brown people, people with disabilities, survivors of sexual assault — and our communities are hurting and scared," they wrote.

But in early January, the New York Times reported that some white women felt excluded by the protest's emphasis on intersectionality, to the point where some cancelled plans to attend the protest. (May I interest you in the definition of irony?) What's more, many participants who were women of color shared experiences in the days following the march that demonstrate the prevalence of white feminism. Despite the organizers; intentions, intersectionality is still not nearly widely enough understood — and it is clear that at this moment in history, intersectionality is essential for our survival. To paraphrase Flavia Dzodan, our feminism needs to be intersectional, or it is BS.

Highlighting the unique issues faced by people of different identities is more relevant than ever under Trump's administration. His presidential campaign heavily relied on stirring up fear of "the other." In 2015, he famously described Mexican immigrants as "rapists" and implied they were drug runners and criminals, and he has called for both a Muslim registry and a ban on immigration from "terror-prone countries." Alarmingly, in his first week in office, he has signed executive orders intended to carry out these campaign promises.

Trump has also demonstrated a profound lack of respect for women, both personally and politically. By now, everyone has heard about the Access Hollywood tapes in which he claims he can "do anything" to women because he's famous. As president, he has reinstated the Global Gag Rule banning foreign nongovernmental organizations from counseling patients about abortion, and his administration is populated with people who are strongly anti-abortion. He has also promised to repeal the Affordable Care Act (ACA), which will disproportionately impacr low-income and minority women.

But wait — there's more! Although Trump himself is wishy-washy on whether The Gays count as people, his administration has no doubts that the LGBTQ community doesn't deserve basic rights like bathroom access or affordable healthcare. According to CNN, around five percent of those covered under the ACA are LGBTQ, so if it's dismantled, that leaves approximately a million LGBTQ people without access to affordable insurance. As a queer woman myself, I woke up on Nov. 9 uncertain whether I would be able to get married or adopt children in Trump's United States. A week after his inauguration, I still have to wait and see what happens.

All this adds up to a frankly disturbing picture for women, people of color, LGBTQ people, and essentially anyone who isn't a straight, cisgender, white man. However, it's especially alarming for anyone whose identities intersect in a way that leaves them especially vulnerable to Trump's administration. White women may be worried about access to healthcare, but many Muslim women are worried about that and the fact that the current president is a man who equates their religion with terrorism. When Trump issued a presidential memorandum advancing approval of the Keystone XL and Dakota Access pipelines, Native people were affected the most. Queer women may simultaneously be worried about access to healthcare both as people who identify as women, and as people who identify as queer.

All this isn't to say that feminists should compete in a misery Olympics; we all stand to lose much under Trump's administration. As Roxane Gay wrote in Bad Feminist, "We would live in a world of silence if the only people who were allowed to write or speak from experience or about difference were those absolutely without privilege."

However, now is the time to recognize that true equality will never be achieved unless we acknowledge the unique struggles each person faces. Rather than shouting over each other, let's start listening.

More like this
Christina Aguilera Took A Powerful Stand At Brighton Pride
By Sam Ramsden
25 Things I've Reduced My Life To, In Addition To WFH In My PJs
By Ginny Hogan
The Spiritual Meaning Of The August 2022 New Moon
By Nina Kahn
Your Daily Horoscope For August 12, 2022
By Mecca Woods
Get Even More From Bustle — Sign Up For The Newsletter