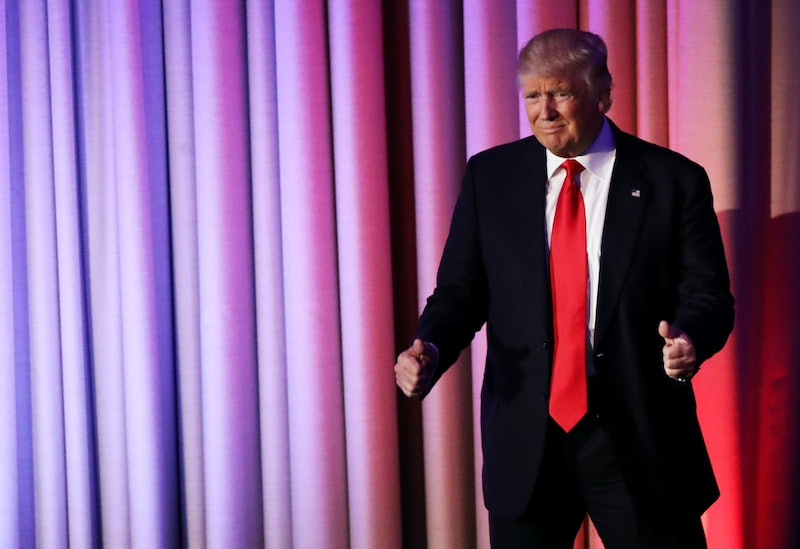 On Thursday, The New York Times devoted its entire editorial section to letters from supporters of President Trump. In over 15 op-eds, writers explain both why they voted for Trump and why they continue to support him — either in spite of his chaotic rule, or in some cases, because of it.

The examples that were most commonly cited as evidence of Trump's policy successes were the United States' growing economy, fighting ISIS on the ground in Syria, and declaring Jerusalem to be the capital of Israel. The GOP tax bill, repeal of the Affordable Care Act's individual mandate, the immigration crackdown, and exiting the Trans-Pacific Partnership were also mentioned. In explaining why it decided to dedicate so much space to Trump supporters, the board wrote:

The Times editorial board has been sharply critical of the Trump presidency, on grounds of policy and personal conduct. Not all readers have been persuaded. In the spirit of open debate, and in hopes of helping readers who agree with us better understand the views of those who don’t, we wanted to let Mr. Trump’s supporters make their best case for him as the first year of his presidency approaches its close.

Here are 11 quotes from the letters that can help illuminate the rationale of parts of Trump's base.

Donald Trump has succeeded where Barack Obama failed. ... The entrenched interests in Washington, which have done nothing but glad-hand one another, and both political parties are angry and afraid. Who knew that all it would take to make progress was vision, chutzpah and some testosterone?

If it takes putting up with Mr. Trump’s brash ways to see things get done, that is a deal I’m willing to accept. To be honest, I’m not sure he would have accomplished what he has so far without being an unrelenting public bully.

Much of the media, as the hotbed of hatred against Mr. Trump, has pushed me more toward him than his social behavior has done the opposite.

Opinion polls give Mr. Trump a low rating, and I would, too, for character, personality and temperament. But I would give him high marks for policies and programs that are stimulating the private sector.

He has turned a fragile nation "anti-fragile" (the scholar Nassim Nicholas Taleb’s term). Before Mr. Trump, we were scared of any volatility. Oh no, ISIS! Oh no, banks! The more chaos there was, the worse we were. Now volatility is our friend. The more chaos, the better! Entrepreneurship up. Optimism up. Good old American problem solving is back! You know who loves change? Capitalists.

When asked during the campaign about his truthfulness, he replied that maybe he is too truthful. He does ruffle feathers, but seems to end up being right about most important things.

I’m thrilled with the progress that President Trump has made in defeating ISIS, cutting taxes for middle-class families and making court appointments. Thanks to the tax cuts, my husband and I stand to keep a much larger portion of our paychecks.

I thought his tough take-no-prisoners manner and, yes, even his unpredictability might be what was needed at this particular time to cause offending persons and countries to sit up, consider us seriously, and think twice about taking advantage of us financially and otherwise.

I am 28, and in the nearly three decades I’ve been alive, I’ve seen Newton Falls and its surrounding environs succumb to a despair reflected by the opioid crisis. .... One candidate sought to address this — Donald Trump.

As the Sonny LoSpecchio character wisely concluded in the movie 'A Bronx Tale,' it’s better to be feared than loved. My hope is for our enemies to fear Donald Trump and for his domestic opponents to realize he’s on their side.

If I wanted a scripted smooth talker for president, I’d have voted for someone else. An unscripted Mr. Trump feels more authentic to me, and I still don’t see him as a politician.

The Times notes that it intends to publish letters from disillusioned Trump voters in the coming days as well as responses from people who disagree with giving his supporters a high-profile platform.