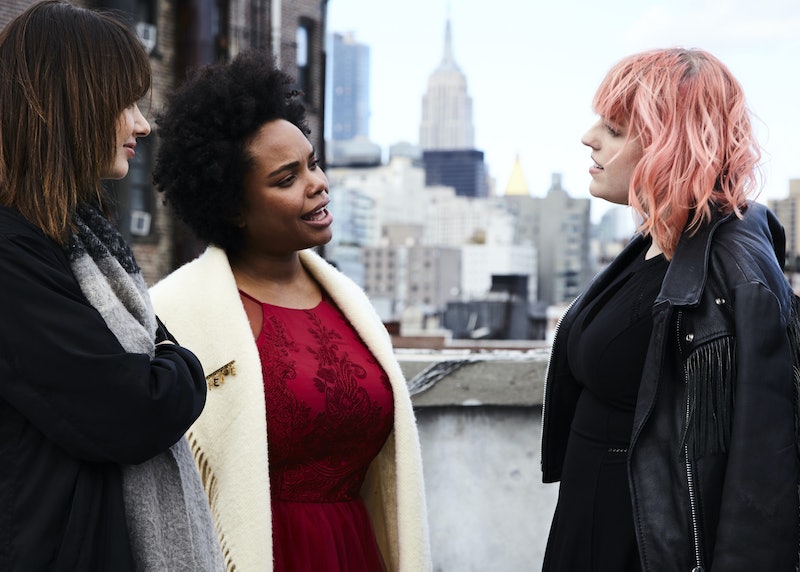 On Thursday, the House of Representatives passed a GOP-sponsored tax bill that majorly cuts taxes for corporations and the wealthiest Americans. The "Tax Cut and Jobs Act" passed the chamber with 227 votes to 205, earning no Democratic support and 13 defections from Republican members.

Now that the bill has been approved in the House, the Senate must pass its own tax plan. Once this happens, the chambers will attempt to resolve the two bills' differences and make a finalized plan. Some Republicans hope they can get a bill through by the end of the year. But when it comes to tax policy, there can be tricky provisions that you might not realize could deeply affect you. And the prognosis for how this plan will affect young women doesn't look good.

Bustle spoke to tax experts to figure out exactly how it would impact millennial women, if it were to be passed in its current form. The summary? "Unless a millennial woman owns a lot of corporate stock or otherwise is very wealthy, the GOP tax bill is bad news writ large," NYC economist and tax expert James Parrott tells Bustle.

Here's exactly how this bill could affect you.

It Eliminates Deductions That Help You

Millennials are notoriously overburdened by student loan debt. The GOP bill repeals the deduction that low- and middle-income Americans can take for their student loan interest. This $2,500 deduction would disappear in 2018, meaning you might end up paying more in taxes — you can read more about what exactly it means for you here.

The bill also repeals the moving expenses deduction, from which millennials — who tend to be very mobile — especially benefit. The deduction currently helps people who moved to a new place over 50 miles away during the previous year.

Meanwhile, the deduction for state and local taxes would also be repealed, which means that if a millennial woman "lives in a state with high state and local tax burdens (like New York, New Jersey, or California) and has a good upper middle class income, she likely will pay more in taxes," Parrott says.

In addition to repealing the student loan interest deduction, the bill would force current graduate students to report tuition reductions provided by their schools as income. For many students, this would dramatically increase their reported income and tax liability. NPR spoke to MIT economics grad students who, after analyzing the GOP bill, said that their taxes could increase by 300 or 400 percent.

In a letter to the House of Representatives, the American Council on Education warned, "This legislation, taken in its entirety, would discourage participation in postsecondary education, make college more expensive for those who do enroll, and undermine the financial stability of public and private, two-year and four-year colleges and universities."

It Adds To The National Deficit, Which Millennials Will Pay For

"Obviously, it's hard to generalize about impacts on all millennial women, since their situation is diverse in so many ways," William Gale, co-director of the Urban-Brookings Tax Policy Center, tells Bustle. "One thing the millennials do all have in common is that the bill would raise government debt significantly, which would pass on burdens to younger generations and would require them either to pay higher taxes or face lower government spending in the future."

Over 10 years, the bill would cut $5.9 trillion in taxes and raise $4.5 trillion, thereby adding $1.4 trillion to the federal deficit. The House passed a budget that allowed for a $1.5 trillion increase to the debt in October.

"Budget cuts will hit everything (and hit all these things really hard)," Parrott says, "from early childhood education and public education K-16), to housing assistance, health insurance, and a broad range of other services for children."

It's also worth thinking about the social reorganization that such sweeping changes to the United States' fiscal policy could initiate. The Tax Policy Center analysis found that the top 1 percent would receive half of the bill's benefits by 2027. Young people will be disproportionately left out of these benefits — a 2014 U.S. Census showed that one in five millennials is living in poverty, and that millennials are less financially secure than their parents were.

"A millennial woman ... will also have to look forward to living in a highly class-polarized, limited opportunity society where hereditary privileges are the norm, and likely, women will be expected to conform to traditional, patriarchal norms," Parrott says. "That is the direction that radical changes like this tax bill very well may take us."

You can learn how to contact your congressional representatives about these two pieces of legislation right here.

More like this
5 Ways To Stand In Solidarity With Women In America From The UK
By Sophie McEvoy
How To Fight For Reproductive Rights, Based On How Much Time You Have
By Courtney Young
Every Single Big & Small Way You Can Fight For Abortion Rights
By Tess Garcia
The UK Abortion Laws In 2022, Explained
By Sophie McEvoy
Get Even More From Bustle — Sign Up For The Newsletter