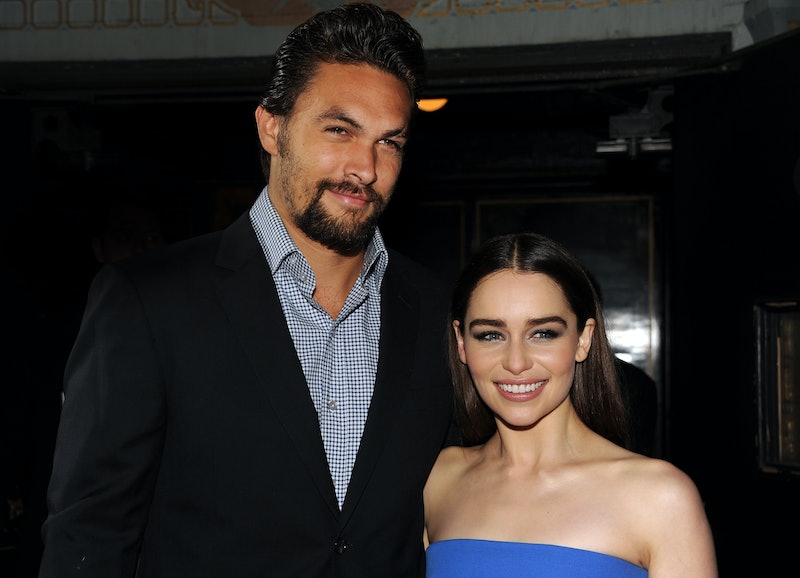 If there's one thing fans can agree on, it's this: Khal Drogo needs to make a Game of Thrones return ASAP. It might not make a ton of sense logically — although, at this point, what does? — but if the show can create an ice dragon, Gendry's sense of direction, and Arya's perfectly preserved bag of faces, they should be able to throw fans at least a little more Drogo. The great Khal was a polarizing character at first, particularly owing to the showrunners' choice to make his relationship with Daenerys seem less than consensual. As the season went on, however, viewers found themselves falling for Dany's "sun and stars."

Fierce, protective, and loving, Khal Drogo advised Dany in the ways of ruling. He was the first successful king Daenerys had witnessed, and likely the last she'd respect until her introduction to Jon Snow. With Drogo beside her, she learned to wield her power — to command people to follow her, and to empower herself through being a Khaleesi (and later, Queen). His plans to conquer the world for Daenerys eventually became her goals for herself. Also, he's played by Jason Momoa. But any real fans would know that already.

Here are some of the reasons Khal Drogo needs to make a Game of Thrones return ASAP.

1. He's Lovable And I Won't Hear Arguments Against It

When the show introduces Khal Drogo in the series premiere, he's an intimidating, enigmatic horse lord who has accepted Dany as a gift. Nine episodes later, and the formidable Dothraki leader had somehow emerged as one of the most tender characters on Game of Thrones. It's hard to say when the proverbial switch flips, but it's impossible not to appreciate Khal Drogo, his power, and his genuine love of Dany.

2. It Would Clear Up Those Visions From The House Of The Undying

One of the lingering mysteries in Game of Thrones is precisely how viewers should interpret Daenerys' time in The House of The Undying. During an extended sequence, she has a vision of her reunion with a fully healed Drogo. Dany, Khal Drogo, and their (living) son Rhaego spend precious moments together. But what did it mean? Viewers still aren't sure. Drogo's return might help explain the significance of that scene — though plenty else in it would remain unanswered.

Look at how nuts everyone goes! Just from his walking out onstage. I won't spoil the rest of it for you, but trust me when I say that it is good. Now, picture future appearances that have the benefit of planning. Oh, yes.

4. The Limit To Jason Momoa Appreciation Does Not Exist

This could get real objectification-y, extremely quickly, so I'll happily keep it simple. Jason Momoa is a good actor. He has interesting tattoos and great hair. The man has total chemistry with Emilia Clarke, and is not not nice to look at. He's the best, and should be in everything forever. The show can resurrect far less muscle-bound characters, so why not the last supreme Khal?

5. A Jon-Dany-Drogo Love Triangle Would Be So, So Good

By "good," I mostly mean "hilarious," because while Jon Snow and Khal Drogo each have their benefits, it would be kind of a no-brainer for Daenerys. She has major chemistry with Jon, but she does not know that he was killed and brought back to life, is likely her nephew, and the rightful heir to the Targaryen name/throne. So, Jon Snow has his pros and cons.

However, the ferocious Khal Drogo helped shape Daenerys' view of the world, and he is portrayed by Jason Momoa. Even Dany makes a joke in Season 7 about how the reigning King in The North is "too small" for her. Khal Drogo is too small for no one. He was also her husband, and the father to her late son Rhaegar. Top that, Jon Snow.

6. Imagine His Face When Daenerys Explains How She Became Leader Of The Dothraki

The stoic Khal was not a man of much expression. If he wasn't scowling, he was likely asleep. Imagine what might happen if he were to return, and someone — likely his vengeful Khaleesi — explained precisely how she came to lead every single member of his people. It might go something like this: "Well, honey, it's a tale as old as time — all the Khals were in a meeting, and I trapped them inside, burned the whole place down, and walked out unscathed!"

7. No One Has Called Khaleesi 'Moon Of My Life' In Way Too Long

Khal Drogo was "sun and stars" to his Khaleesi, and in turn, she was the "moon of his life." Whether it's in Dothraki or in the Common Tongue of the Seven Kingdoms, I need to hear him say "moon of my life" at least one more time. Plus, Daenerys' title has gotten a bit wordy. "Moon of my life" is simpler, and distinctly more charming than a list of her recent accomplishments.

8. A Reminder That 'Aquaman' Is Coming Soon

Jason Momoa is starring in the 2018 film Aquaman. (Sorry, Vinny Chase.) Not enough people know that, but they absolutely should. Get J.Mo back on TV by next summer, and everyone will be talking about D.C.'s next big thing! Super bonus: The chance to see what Lisa Bonet, who he married in 2007, wears to all of the red carpets. Seriously.

9. It Would Be Pretty Great To See Him Go Up Against A White Walker

Drogo played his cards close to his chest, but that doesn't mean the man lacked creativity. Early in the series, he murdered Dany's brother Viserys by melting gold into boiling liquid and pouring it over his head. Viserys had it coming. So, do the White Walkers. Just picture what Drogo could to to a wight who has offended the moon of his life.

10. Having Khal Drogo Back Could Simplify Dany's Line Of Succession Issue

Since the loss of her son Rhaego, Daenerys believes, possibly correctly, that she's unable to bear children. Fans of the books have debated this for years. On the show, however, Dany has made it clear that she's unlikely to marry again, and definitely won't be birthing any non-dragon children. Since her line of succession post-conquering of Westeros remains unclear, a reunion (and potential child?) with Khal Drogo would straighten the plan out.

Sorry, but I am not sorry. As listed above, the limit to Jason Momoa appreciation does not exist. He's large, in charge, and seems surprisingly fun to be around. The world is a better place when he's on TV for an hour every week.

It might be wishful thinking, but I don't blame fans for going there. Khal Drogo needs to make a return to Game of Thrones before the series ends. Even if it's just in another spooky vision.