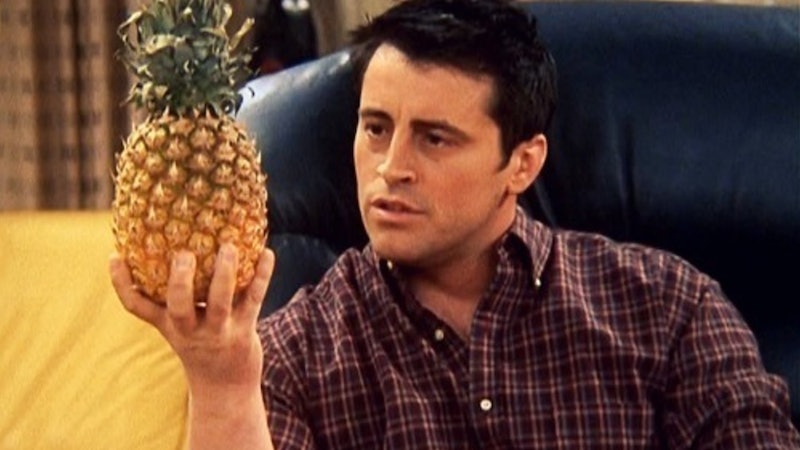 Like people, characters evolve. If you think back to the Friends pilot, which aired in 1994, Joey Tribbiani was known for his love of women and food. Those two passions didn't change as the series continued, but by the finale, there's no doubt Joey became a different person. But just how did Joey change on Friends from beginning to end? Let us count the ways.

Joey, of course, was known as the goofy, lovably dumb friend, but he wasn't always that way. Similar to all of the other Friends characters, Joey transformed greatly over the years. It had a lot to do with all of the life experiences he encountered throughout the comedy, in addition to him, you know, getting older. Joey was in his mid-20s in Season 1 and his mid-30s by Season 10. He had an entire decade to grow, which he most definitely did. He also changed in some negative (not to mention frustrating) ways, but you can't always get what you want when it comes to TV characters.

Joey showed so much growth with each season and by the time the series finale rolled around, it was almost like looking at an entirely different person. Here's how.

It's still unclear why the show felt the need to dumb Joey down. Granted, he wasn't always the smartest, but, if you recall, Joey started out capable of having conversations with his friends without having to pretend like he knew what was going on, like when he bought the "V" encyclopedia. Even in Season 5, based on Monica losing her eyelash curler, Joey figured out Chandler and Monica were secretly seeing each other. By the end of Season 10, he showed a bit of wisdom every now and again, but it didn't come without him or the show poking fun at his intelligence.

2. Rachel Became One Of His Closest Friends

When Rachel first entered the friend group, she didn't know Joey or Phoebe at all. However, Joey and Rachel became two of the closest characters at the end of it all. Yes, there was that whole storyline about them developing romantic feelings for one another, but, minus that, they ended up being true best friends.

3. He Embraced His Feminine Side

He might not ever admit this, but Joey became more feminine as the series went on. Not only did he like how his roommate Janine (Elle Macpherson) decorated their apartment, but he even enjoyed carrying around a shoulder bag given to him by Rachel.

4. He Got More Serious About Love

From the get-go, Joey only focused on sleeping with as many women as he could — and delivering his famous “How you doin’?” line. He didn't like to seriously date or become attached to the opposite sex. That all changed when he found himself attracted to Rachel. Even though they didn't work out, their short fling showed Joey that he actually did want to find someone special to spend his life with.

5. He Embraced His Food Obsession

"Joey doesn't share food!" He's always had an extreme dedication to all foods, but he really took it to the next level when he participated in a cooking class with Monica. He even ended up being quite good. So much so, Monica reluctantly gave him her aluminum foil star.

6. He Had A Solid Career

Joey didn't have a huge acting career by series end, but there’s no doubt he worked his way up to some pretty memorable parts. He started out at as a struggling actor booking some terrible projects (like every single play he did), but he ended up scoring some major roles. His biggest role was on Days of Our Lives as Dr. Drake Ramoray, until that character died. Of course, Joey eventually rejoined the show. He even starred in a movie, which may have not been that great, since, you know, Chandler fell asleep during it. Either way, Joey’s career flourished.

7. He & Chandler Became Even Closer

Since day one, Chandler and Joey were BFFs. Even though they were also tight with Ross, these two had a special kind of relationship. It doesn’t seem possible that they were able to get any closer than they already were, but, by the series finale, Chandler and Joey’s friendship was unbreakable.

He wasn’t always the best at giving relationship advice, but he managed to become quite the romance master. For example, let's relive the following moment. This is what Joey said to Chandler after he learned Monica was really looking for Joey that night in London:

“Yeah for like a half an hour one night! Chandler, she wants you for the rest of her life! You're so lucky! Look what I missed out on by not being there! Although you know what? It could never have worked out like you guys did, 'cause you guys are perfect for each other. You know, we look at you and — and we see you together and it just... it — it fits. You know? And you just know it's gonna last forever.”

And what about when he said this to Ross about Rachel in the series finale?

“You gotta think about last night the way she does, OK? You know, maybe sleeping together was the perfect way to say goodbye.”

And after Phoebe panicked that Rachel would never know how Ross really felt, Joey said:

"Maybe that’s OK, you know? Maybe, it is better this way. I mean, now you can move on. I mean, you’ve been trying to for so long. Maybe now that you’re on different continents… maybe now you can actually do it, you know, you can finally get over her."

He eventually found a way with words, didn’t he?

9. He Could Actually Loan People Money

Chandler was the one always loaning Joey money, but by the end of the series, Joey found himself making enough money that he could loan it to other people. He even tried to pay back Chandler in Season 8, but never did, because he just owed him way too much — like, a lot.

When the series first started, Joey was dating a ton and had all of his friends by his side. However, when the comedy concluded, he had no roommate, no relationship, and everyone else was coupled off. Yeah, this may have been the best segue for the spinoff, Joey, but it’s kind of sad if you think about it. Obviously, Joey wasn’t completely alone and he was still friends with everyone else, but he had the loneliest ending.

In the beginning, Joey always went after women no matter what. However, that all shifted when he developed feelings for Rachel. So much so, that he was even willing to not pursue things with her for the sake of Ross’ feelings. That speaks to Joey’s character and how selfless he became towards the final episodes.

At first glance, Joey may seem silly and dumb, but he definitely transformed over an entire decade.