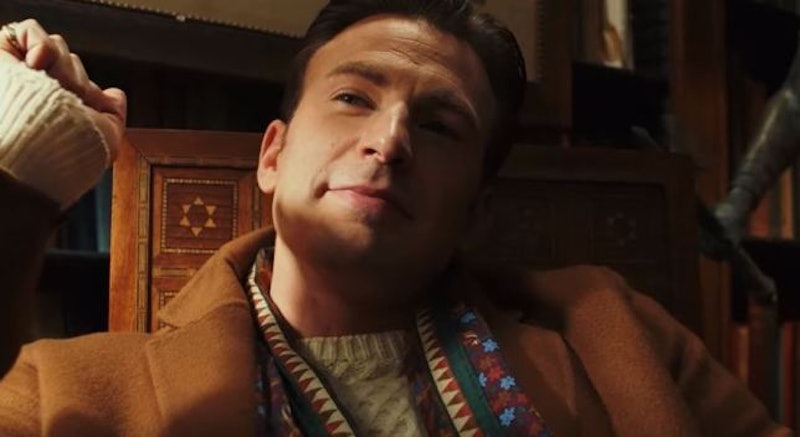 Knives Out, a fun, murder-mystery film, is hitting theaters just in time for the holidays to act as the ultimate getaway treat for your own personal family drama. But in case you need more of an escape between carving turkey and avoiding politics, these 12 books like Knives Out are perfect to pick up after you see the movie when it premieres on Nov. 27. (And if you decide to start reading them now, I can keep a secret.)

Directed by Rian Johnson (The Last Jedi) and starring many famous faces like Daniel Craig (Casino Royale), Chris Evans (Avengers: Endgame), and Jamie Lee Curtis (Halloween), Knives Out is a rollicking murder mystery set on a rural, luxurious estate. To celebrate his 85th birthday, crime writer Harlan Thrombey (Christopher Plummer) invites his estranged family to his home, with disastrous results. Thrombey is found dead, but was he killed by a family member, a dissatisfied employee, or someone else entirely? Detective Benoit Blanc (Craig) swoops in to solve the case, but it's not an easy job. Everyone in Thrombey's circle (and family) wants something, and they each have secrets to keep.

Knives Out has drawn comparisons to Agatha Christie's Hercule Poirot mysteries and the films of Alfred Hitchcock. And while there is no Knives Out book, if you're looking for stories like the movie to read, look no further than these 12 fun titles:

In the Hall with the Knife by Diana Peterfreund

With humor to temper its dark subject matter, Knives Out feels a lot like the 1985 Clue film starring Tim Curry, which makes Diana Peterfreund's board game-based novel, In the Hall with the Knife, the perfect accompaniment. The first book in a new series of Clue mysteries, In the Hall with the Knife centers on a group of six prep school students, who must solve a murder mystery — and try to stay alive — when their headmaster is found dead in the conservatory.

An attorney returns home to investigate his sister's death in this novel from Black Orchid Blues author Persia Walker. A lot of Lillian's life doesn't make sense to David, including her marriage to a near-stranger, and the odd behavior of her twin, Gem, following the death. David doesn't trust his late sister's widower husband, and he takes it upon himself to protect their family legacy from this outsider. But David has secrets, too, and they make Harlem a very dangerous place for him.

The aging Aristide Leonides lives in his huge manor with his children and grandchildren. One big, happy family, right? Wrong. The 85-year-old patriarch dies from a fatal injection, leaving his much-younger wife and her lover the prime suspects. In the wake of the tragedy, Sophia Leonides, Aristide's granddaughter, postpones her engagement to Charles Hayward until the murder mystery is solved. Determined to marry Sophia, Charles moves into the family home as a guest, and sets about helping his father, a member of the Scotland Yard brass, with his investigation.

The Hollow of Fear by Sherry Thomas

This genderbent take on the work of Sir Arthur Conan Doyle centers on Charlotte Holmes, Lady Sherlock, as she investigates the murder of a friend's wife — a case in which he is the prime suspect. Lady Ingram is dead, and Charlotte's half-brother — who happens to be the dead woman's old flame — has gone missing. In order to solve this mystery, she'll have to work in disguise, but is the danger surrounding Lord Ingram too much for the consulting detective to handle?

The Hunting Party by Lucey Foley

For the last 10 years, a group of nine college chums have spent the days between Christmas and New Year's together on holiday. This year, they've rented Loch Corrin, a remote, Scottish estate, where they can get a little much-needed peace and quiet. Two days after they arrive, however, one of them is dead. The Loch Corrin guest was murdered, ostensibly, by someone who was supposed to be a friend, but who is dead, and who killed them, are mysteries left to be revealed.

Murder on the Red River by Marcie R. Rendon

More than a decade after he rescued her from a car crash, Sheriff Wheaton and Cash are working a murder case together. He'd rather she went to school and cleaned up her act, but they have bigger problems, and she has a particularly useful skill. An Indian man has died, and Cash is having dreams about his wife and daughter, still at home on the Red Lake Reservation. The family home won't solve the mystery of the man's death for them, but it's a start.

The Stranger Diaries by Elly Griffiths

High school English teacher Clare Cassidy lives for the work of R.M. Holland, the Gothic author whose books she teaches each year. When a close friend is murdered, and a clue at the scene points to a Holland short story, Clare finds herself at the center of a murder investigation. Believing the killer is someone in her circle, Clare keeps her thoughts confined to her faithful diary. Then another person's handwriting appears in the journal, addressing Clare directly, and the teacher's life becomes much more complicated — and deadly.

The Cutting Season by Attica Locke

In another time, Belle Vie embodied everything that antebellum Louisiana held dear. These days, it continues to sugarcoat its ugly history, hosting weddings and Civil War reenactments. Belle Vie's manager, Caren, is descended from the enslaved people who once worked on the property, and her job security is now threatened by the estate's lack of steady business. When the body of a murdered migrant worker is found nearby, Caren's routine business at Belle Vie becomes entwined with the ensuing police investigation.

Those People by Louise Candlish

An established community in the London suburbs, Lowland Way has a particular routine. It's quiet and peaceful, and the neighbors are like family to each other. That is, until Darren and Jodie come along. They're the worst neighbors ever, with their loud music and their front yard full of cars for sale. As the community's posher families scheme to get rid of their new neighbors, the unthinkable occurs. Someone is dead in Lowland Way, and someone else murdered them, but why?

Meddling and Murder by Ovidia Yu

Restaurateur Rosie "Aunty" Lee wouldn't have gotten where she is today if it weren't for her knack for sticking her nose where it doesn't belong. When another Singaporean businesswoman loses her maid, Aunty Lee is happy to let her own employee, Nina, work there in the interim. But Nina's reports about the other household have Aunty Lee worried. Did the other maid quit without notice, or did something much, much worse happen? Following her instincts, the heroine of Ovidia Yu's mystery series will have to solve the case before Nina meets the same fate.

One Little Secret by Cate Holahan

The three couples subletting the beach house needed the getaway in a bad way. But when a night of drinking leads to the revelation of dark secrets, one of the six people in the rental doesn't make it to morning. Detective Gabby Watkins must determine who killed the woman on the beach, but with a house full of people who each have their own motives for murder, her job won't be an easy one.

The Widows of Malabar Hill by Sujata Massey

Set in 1921 Bombay, this series-starter from Sujata Massey centers on Perveen Mistry, a fresh Oxford grad who returns to India to work in her father's law firm. Perveen's first case involves the will of a mill owner, whose three wives have signed over their inheritances to the same charity. It's a strange move, and one that will almost certainly doom the women, who have no other means of income. Complicating matters is the fact that the widows live in seclusion, refusing to speak to men outside their families. Perveen begins her investigation, but soon finds herself wrapped up in a murder mystery only she can solve.