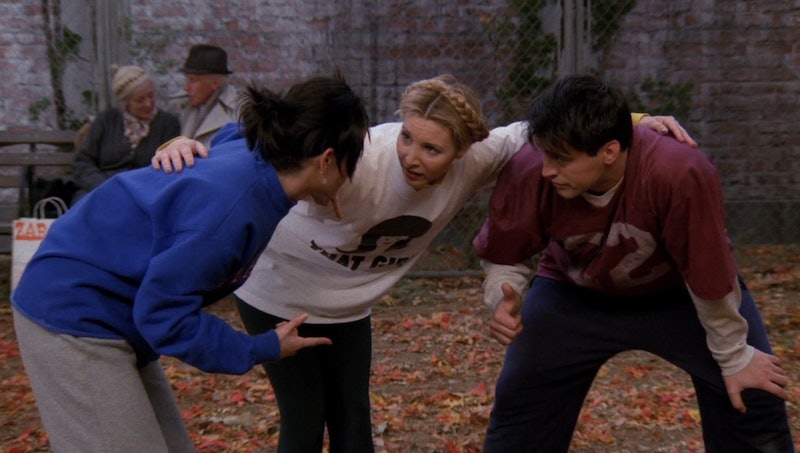 Whether it feels like it right now or not, fall is approaching, and colder weather means more time staying inside and streaming a TV show you've already seen multiple times. If you're a Friends fan, you've probably seen the episodes so many times it doesn't even matter what order you watch them in, so why not try out a themed marathon. Below are 12 Friends episodes that will get you ready for fall... and they aren't even all Thanksgiving episodes.

The date that episodes of Friends originally aired generally matched up with the time of year it was on the show. If an episode aired in October, the friends were usually wearing fall clothes and leaves were on the ground if they happened to venture outside. That said, there aren't that many explicit mentions of holidays or the time of year on Friends. But, one big exception to this is the yearly Thanksgiving episodes, which, obviously, are perfect for fall. So, to make things a little more interesting (aka to make this not just be a list of the Friends Thanksgiving episodes) not all of them are included below and several non-Thanksgiving episodes are featured, too.

Get your cup of tea, light a candle that smells autumn-ish, and get ready for these cozy Friends episodes.

While, yes, this episode is about Monica and Ross' grandmother dying, it is also very fall appropriate. It's rare for Friends to have extended scenes of the entire cast that take place outside, but this one does and they're in their fall finest (because they're dressed for a funeral...). Also fall related: Joey secretly watches a Giants game on a portable TV.

It's the first Thanksgiving episode, and if you forgot, it's the one where they all get locked out of the apartment after going to the roof to see one of the balloons that escaped from the Thanksgiving Day Parade.

In another Thanksgiving episode, everyone decides to play football in really '90s workout clothes, and Ross and Monica get way too into it.

This one feels like fall because it involves Ross playing rugby and rugby feels like football. This is also the one where Chandler pretends to be moving to "15 Yemen Road, Yemen" to get rid of Janice.

Thanksgiving actually goes really smoothly this year, but the gang reminisces about times the holiday didn't go so well. Really, though, the main thing to know about this episode is that it's the one where Joey and Monica have turkeys on their heads.

The titular sandwich is a Thanksgiving leftovers sandwich, which makes this episode fall appropriate just like the episode right before it. And, lest you forgot, the secret to Monica's perfect Thanksgiving sandwich is an extra slice of gravy-soaked bread in the middle.

Two big reasons this one's great for autumn: Rachel teaches Joey to sail on a couple of crisp fall days, and there's a ton of freshly baked cookies.

Surprisingly, Friends only ever had one Halloween episode and this is it. As for costumes, Monica is Catwoman, Ross is "Spud-nik", Chandler is a pink bunny, Joey is Chandler, Phoebe is Supergirl, and Rachel, who is pregnant, is "a woman who spent a lot of money on a dress and she wants to wear it because soon she won't be able to fit into it."

It's the one where Brad Pitt shows up for Thanksgiving and really, really hates Rachel.

This episode is for anyone out there who loves buying new boots in the fall, especially if you have trouble resisting them regardless of the price tag.

It's the final Thanksgiving episode and a reluctant Monica makes dinner even though she and Chandler are stressed out about the process of trying to adopt a baby. The comedy involves Rachel and Phoebe entering Emma in a baby pageant and Monica and Chandler locking everyone out of the apartment for showing up late, but there's a real emotional moment at the end when Monica and Chandler find out they're getting a baby.

Now, hurry up and watch these before it gets too late and you have to get your winter episodes ready. The Holiday Armadillo will be waiting for you.