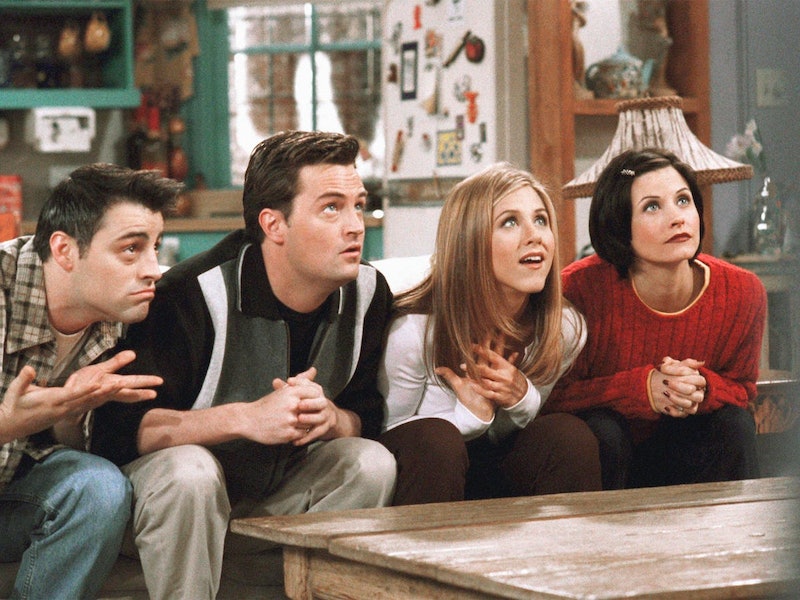 Reboots and revivals are becoming more and more common in the entertainment industry. Whether you've fallen back in love with the Tanner family on Fuller House or rediscovered your love for avocados with the Fab Five on Queer Eye, the world is currently experiencing a reboot renaissance of sorts. But not every beloved show of the '90s has been given the opportunity to return (at least not yet), which is why Jennifer Aniston's comments about a potential Friends reboot are sure to set your Central Perk-loving heart aflutter with excitement.

The subject of a possible revival came up during a recent interview for the September cover issue of InStyle. When asked if she thought the likes of Ross, Rachel, Joey, Phoebe, Monica, and Chandler would ever grace our television screens again, the Along Came Polly star had a few very interesting things to say on the matter and seemed relatively open to the idea. "Before that show ended, people were asking if we were coming back. Courteney [Cox] and Lisa [Kudrow] and I talk about it. I fantasize about it," Aniston admitted. "It really was the greatest job I ever had. I don’t know what it would look like today, but you never know. So many shows are being successfully rebooted."

The fact that Aniston is so game to reunite with her five former costars is almost too amazing to comprehend. Half the battle can sometimes be trying to get the cast of characters back together again, but Aniston seems more than willing to give it a try. However, there is one person she's a little worried about convincing: Matt LeBlanc, who played the lovably dim-witted Joey Tribbiani. "I know Matt LeBlanc doesn’t want to be asked that question anymore," Aniston told the outlet during the same interview. "But maybe we could talk him into it."

Never fear, though, because even if LeBlanc doesn't ever come around to a reboot, Aniston has another great idea for a TV show that may be even better than a Friends revival. (That's right, you heard that correctly.) She said: "Or we just give it some time and then Lisa, Courteney, and I could reboot The Golden Girls and spend our last years together on wicker furniture." Now, this absolutely needs to happen as soon as possible because if that isn't a pitch for a TV ratings goldmine, then nothing is. (Your move, Netflix!)

Of course, this isn't the first time the subject of a Friends reboot has been broached by a member of the cast. In fact, back in 2016 Aniston herself was quoted as saying that a Friends reunion wouldn't be a good idea during an interview with ITV.

"I don’t know what we would do. I think that period of time was sort of nostalgic, you know? I think people have such affection for it, even though it was only 12 years ago since it ended..." she explained. "There was something about a time where our faces weren’t shoved into cellphones and we weren’t, like, checking Facebook and Instagram, and we were in a room together, or at a coffee shop together, and we were talking... having conversations. And we’ve lost that."

Even the show's co-creator David Crane recently told The Wrap that a Friends reunion is "never happening," so it's definitely a topic that's been debated back and forth for quite some time. Whether or not it ever comes to fruition remains to be seen, but hopefully Aniston's latest remarks is enough to get the ball rolling and, at the very least, give us the Golden Girls reboot we never knew we needed.

More like this
Courteney Cox Recreated An Iconic 'Friends' Scene To Surprise Fans
By El Hunt
Kim Cattrall Had A 'Sex And The City' Reunion With Creator Darren Star
By Grace Wehniainen
17 Photos Of The 'Wednesday' Cast Vs. The 1991 'Addams Family' Cast
By Grace Wehniainen
The 'Kenan & Kel' Reunion On 'SNL' Took A Dramatic Turn, Thanks To Keke Palmer
By Brad Witter
Get Even More From Bustle — Sign Up For The Newsletter