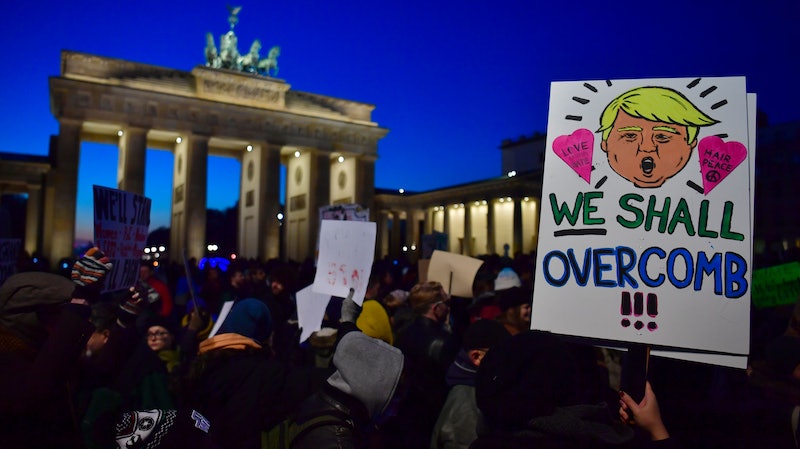 Break out the markers, glitter, and poster board — it's time to put your craftivism to work. If you're headed to a Women's March event this weekend, you've probably put a bit of thought into the logistics. And if you've tossed about the idea of toting a placard of some kind, you've probably mulled over the idea of making it yourself. And if you've considered making your own sign, you've probably thought about how you could say something powerful and profound while still being funny. Luckily, the internet is awash in really clever people, many of whom have already come up with funny sign ideas for the Women's March on Washington that might spark your own creative sign for the march.

The rules for signs at any Women's March on Washington event are relatively simple. Make sure your slogan or sign adheres to the march's guiding principles, and keep in mind that nothing that can be used as a weapon is permitted (meaning your sign should be mounted to a cardboard post or made to be held by hand).

What you choose to express on your sign is up to you. Perhaps it's your reason for marching. A slogan of empowerment. The freedom you cherish most. The right you'll keep fighting for. Whatever concerns you have about the state of women's rights now, or simply a message for the incoming White House administration — the options are endless. Once you've settled upon what you want your sign to say, you'll have to decide how you'll say it. Through art, a clever play on words, or the tried and true simple script? If you've found the perfect thing to say, but are stuck on how to say it best, let your fellow marchers inspire your sign making.

Women know a thing or two about the importance of letting walls go.

Because women will not be enslaved or silenced.

Those Of Us With Ovaries Need A Press With Balls!

I Am So Angry

Your sign making isn't limited to paper and pens. Get creative!

The Handmaid's Tale Is Not An Instruction Manual!

For those who haven't yet read The Handmaid's Tale, Margaret Atwood's novel begins when an extreme Christian group overthrows the United States government, suspends the Constitution, and does away with women's rights.

Coordinate your outfit to your sign and double the visual appeal.

I mean, it's kinda true, though.

We Were Served A Lemon

When life gives you lemons, use them to make protest signs.

Keep Your Tiny Hands Off My Rights

No hands, big or small, are going to take away women's rights.

Turn to your favorite quotes, lyrics, and poems for inspiration.

I always knew Donald Trump's tweets would come back to haunt him sooner or later.

Justin Brown has got a slew of clever ideas for you.