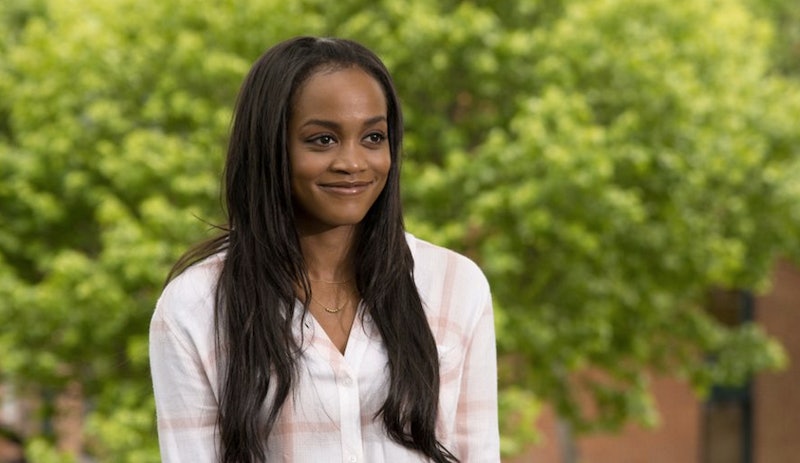 Rachel Lindsay will leave this season of The Bachelorette engaged and in love, but when she does, the rest of the world will be heartbroken because she'll no longer be gracing our screens. When fans look back at this season of the show, it won't just be characterized by the drama between the men, of which there was plenty, but rather by how Rachel handled every obstacle on her quest for love with strength and humor. In every episode, she gave the suitors a lot of reasons to admire her, but was a relatable role model for viewers, as well. So was Rachel Lindsay the best Bachelorette of all time? There are certainly plenty of reasons to think so.

While host Chris Harrison would like to think every season of the franchise is the most dramatic yet, this season definitely came with a big dose of emotion. From absurd drama in the mansion to tense hometown dates, there were plenty of situations that tested the star. Rachel's role on the show also came with the added pressure of being the first black Bachelorette. She seemed aware of how her decisions would be measured through a different lens, and under such scrutiny anyone would have wanted to go home. Rachel was ready for the journey to be difficult, though, and she tackled the whole season with empathy and fairness. Here are the top reasons that Rachel is the best of all time:

1. She Didn't Put Up With The House Drama

Rachel made it clear early in the season that she didn't have time for the squabbles happening inside the mansion. When suitors got into arguments, she was quick to get to the bottom of the situation and send the drama makers home. She said goodbye and good riddance to gossip kings like Iggy and Blake E.

2. She Truly Kept An Open Mind

Most of us would go running if a date showed up with a mannequin of himself or went by the job title "Tickle Monster," but Rachel gave each and every one of her suitors a fair chance. Of course, most of these men didn't make it far on the show, but Rachel not being cynical about the experience made the whole show more believable for audiences and may have set her up for an increased chance of success in the relationship she ends up in.

3. But She Was Straightforward

While Rachel definitely gave every suitor the same consideration, she was honest. For example, when she couldn't get past her summer camp history with Freddy, she didn't want to mislead him and sent him home. Some suitors left disappointed, but Rachel was always honest and sensible in her decision making.

4. She Wasn't Afraid To Stand Up For Herself Online

The internet is full of discouraging types, and as this season of The Bachelorette aired, there was no shortage of trolls. Rachel didn't waste much of her time addressing critics, but when the negativity came from certain people from within the Bachelor community, she spoke out. She shut down former contestant Leah Block's racially offensive comment, and didn't let suitor Lee Garrett get away with his history of offensive tweets.

5. Her Conversation About Therapy Was So Important

On Rachel's first one-on-one date with Peter, the contestant opened up about his history with therapy. Rachel was moved by Peter's honesty, and said that she, too, had used therapy to learn about herself after a breakup. It was so refreshing to see the two have a frank conversation about mental health, and to speak about seeking help in a positive way on such a big platform.

6. Her Decisions Made Sense (Most Of The Time)

Rachel put a lot of thought into her choices and for the most part (who even were Adam and Matt?), her decisions were on point. Rachel was super open-minded about every suitor, but she held onto some of the goofier choices, like Whaboom, for just long enough.

Even during Nick Viall's season, Rachel never seemed to be putting on a performance. She's genuinely funny and super smart, and her personality doesn't seem forced. While the show will put her in some silly situations — like dancing in the street or riding horses on Rodeo Drive — Rachel's enthusiasm made these dates seem much more organic.

8. The Way She Handled DeMario-Gate

In one of the most dramatic episodes, an ex of contestant DeMario Jackson showed up. DeMario first pretended not to know her, but Rachel quickly poked holes in his alibi. She chose to believe his ex, and sent the suitor home. As contestants fallen from grace tend to, he showed up at the mansion that night and begged for a second chance. Rachel didn't give him an inch, and the way she handled such an unpleasant situation was flawless.

9. Her Season Had The Best Group Dates

Why had there never been a spelling bee on The Bachelor before? Rachel made it clear that she wanted her future husband to be intelligent, and this challenge really pushed the suitors out of their comfort zone. While the show is known for taking participants on spectacular international trips and staging romantic dinners, the most amusing dates of the season were unconventional. From puppy hotels to literary competitions, the best suitors shined on these dates.

10. She Was Under A Lot Of Pressure And Handled It Well

As the first black Bachelorette in the history of the franchise, Rachel faced lot of pressure. "It's just hard being the first, being in this role and putting your personal life out there and everyone having an opinion," Rachel told Access Hollywood. "I really just had to say, 'you know what Rachel, you have to do what's best for you.'" Even though fans were pulling the star in a lot of different directions, she was true to herself.

11. She Loves Her Dog More Than Any Suitor

Rachel was often relatable, but perhaps never more than when she brought her dog, Copper, on a date. Even better, she was honest about the fact that her man would need to compete for her love, because honestly, this pup had most of it already.

Rachel has been open about how in order to find a husband, she had to be willing to go into this experience with a confident, even selfish, attitude. It was her journey, and in order to find love, she had to embrace that it would require her to put herself first. However, when it comes to her life following the show, she has said that she wants to use her platform in a totally unselfish way, including inspiring and fighting for the rights of women and people of color. "We’ll see what happens. I’ve said on this journey that I felt so selfish about what I’m doing [going on a reality TV show to find love]," she told Glamour magazine. "but I never knew that I'd have this amazing platform to impact so many people."

Rachel reaches the end of her journey on Monday night, and once her season is over and the roses are handed out, fans are going to miss her most of all. The star's new fiancé got to know how great she was over the course of the season, and viewers did, too.