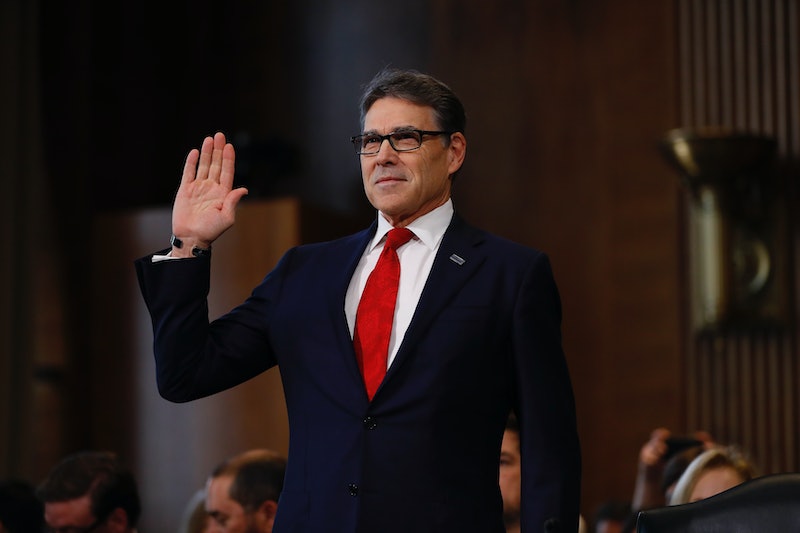 Also known as the head of alt-right site Breitbart, Steve Bannon has been ousted from his National Security Council role and replaced by Rick Perry. To say the least, the internet's gone wild. Appropriately, too — considering the administration's choice was controversial from the onset thanks to Bannon's past with Breitbart. But whether Perry will do the job better is also sending Twitter into a fit of jokes.

Personally, I imagine it would be difficult for Perry to be much worse than Bannon. When some of the Brietbart headlines approved under Bannon include gems like "There's No Hiring Bias Against Women In Tech, They Just Suck At Interviews," you can't help but feel happy when things don't go his way.

Twitter users were glad that he has been ousted, of course, but did share some skepticism on just what that meant. Vice President Mike Pence told Fox News that Bannon will keep his clearance and can still attend National Security Council meetings (during his time as advisor, he had attended a grand total of one).

Nevertheless, Twitter delivered with some great tweets and memes about the whole situation. Enjoy some of the best, and relish in the fact that (maybe) Bannon got knocked down a peg:

1. That's President Bannon To You

What if Trump was not a fan of the nickname the internet had given Bannon? Could this help explain his departure?

2. Maybe President Kushner Is A Better Fit For The Job

Will Kushner call the shots now that Bannon has left his role?

This meme never gets old.

There's no crying in this White House.

Walked right on out of the Oval Office.

This is well, amazing.

9. Will Bannon Be On Dancing With The Stars Next?

10. Some Were Not So Fond Of Perry, Either

We're just out of options, I guess.

11. Lest We Forget This Reality Television Gem

That skip really just pulls the whole routine together, you know.

He won't have to do much to be better than his predecessor.

Bannon or Perry: one is awful, the other seems not so great, but at least we have Twitter to pull us through.

More like this
The Best Memes & Tweets From The 2022 Met Gala
By Olivia Rose Ferreiro
Oops! Katy Perry Fell During 'American' Idol & Twitter Loved How She Reacted
By Jake Viswanath
Twitter Can’t Get Enough Of The WAGatha Christie Trial
By Nola Ojomu
Every 'This Is Us' Fan Owes Miguel An Apology — Immediately
By Jake Viswanath
Get Even More From Bustle — Sign Up For The Newsletter