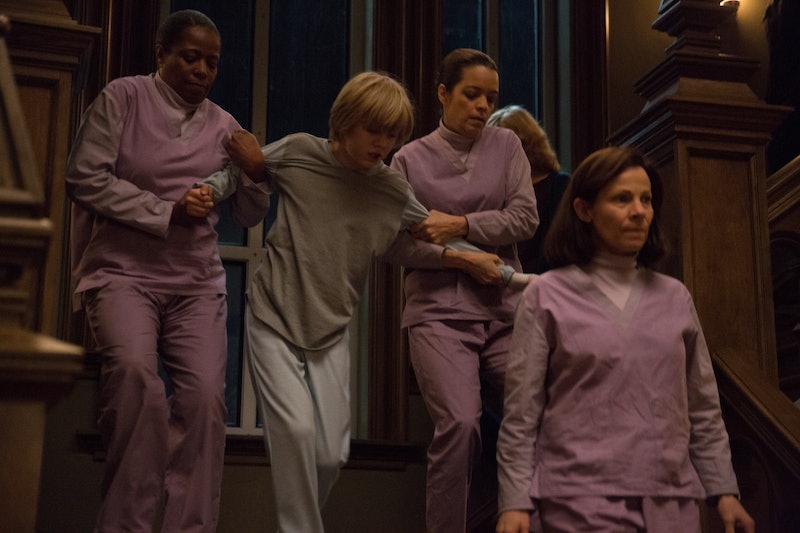 Finding something to watch on Netflix can take a long time, and you may just end up rewatching something you've already seen. (Hello, eighth viewing of Parks and Rec.) Say you know that you're in the mood for a dark scary movie, however — Netflix has a bunch, no matter how you define "dark." The streaming service has a huge horror movie section, with themes ranging from the supernatural to the psychological to humanoid robots that might be more sinister than they appear.

When it comes to the 12 movies listed below, you'll need to be sure that you can handle being scared, but also that you can handle being haunted by what you've seen long after the movie is over. In one case, that means images of a talking goat running through your head after the credits roll, and in another, that means thinking about a little kid receiving some incredibly suspicious healthcare. Finishing one of these movies could mean that you'll never risk staying in a rental home ever again. Hey, I'm just trying to prepare you for the risks you're taking.

Find out more about some of Netflix's darkest scary movies below, along with their trailers — some of which might be creepy enough for you on their own.

Baby stealing is a pretty dark subject, and in The Witch, that's what you'll get. You'll also get terrifying imagery involving a goat, a very spooky forest, and a ton of witchcraft in this horror film centered around a Puritan family in the 17th century.

When you think about it, is there anything more haunting than the mysterious inner-workings of the human mind? In this thriller, a psychologist who witnessed a traumatizing incident with a patient tries to start practicing again, even though her grasp on reality is crumbling.

It's not a horror movie, but this thriller starring Oscar Isaac, Domhnall Gleeson, and Alicia Vikander gets super dark, especially if the potential of artificial intelligence really freaks you out.

A young woman who escaped a cult years before is kidnapped again and learns something horrifying about herself. If anything to do with mutilation bothers you, look away. Also, look away if you can't deal with cults, abduction, demons, and whole lot of blood.

Julianne Moore and Jonathan Rhys Meyers star in 6 Souls, which is about a psychiatrist and a man who is thought to have multiple personality disorder. Something far more spooky and disturbing is going on.

The sequel to (obviously) 13 Cameras involves an unfortunately reasonable fear. A creepy voyeur rents a house to a family who don't know that there are over a dozen cameras tracking everything that they do. And that's just the beginning.

While we're on the topic of cameras, Cam is about a sex worker (Madeline Brewer), who posts on a webcam site, but finds that her identity and webcam channel has been stolen by someone who looks exactly like her.

Darker in a different way than the other films on this list, The Maus combines the supernatural with real-world history in its story involving the Bosnian War.

And we're back to cults! The Ritual is a British feature about four friends who go on a hiking trip in Sweden that involves a lot more than the great outdoors.

Jennifer Lopez stars in 2000's The Cell, about a psychologist who goes into a serial killer's mind. Literally. Sort Of.

It wasn't a huge hit with critics, but its visuals will definitely stick in your head.

Creepy kids are a horror movie standard, but this new Netflix original also involves a kid who is receiving "treatment" for a "disorder." Messing around with a child's health and wellbeing is undeniably dark, so make sure you're in the right mood for this one.

Based on the Stephen King novel of the same name, Gerald's Game involves a couple hooking up with the woman in handcuffs... then her husband dies from a heart attack while she's still in them. She's left to figure out how to survive while experiencing terrifying hallucinations.

If these descriptions alone are too much for you, don't forget that The Great British Baking Show is streaming on Netflix too.

More like this
Here’s Everything Coming To & Leaving Netflix In February
By Jake Viswanath
Here's How Netflix Should Adapt Prince Harry's Memoir Into A Movie
By Ginny Hogan
Pamela Anderson Is Still A Hopeless Romantic
By Ilana Kaplan
Alicia Silverstone Revives Her 'Clueless' Character In This Super Bowl Commercial
By Jake Viswanath
Get Even More From Bustle — Sign Up For The Newsletter
From hair trends to relationship advice, our daily newsletter has everything you need to sound like a person who’s on TikTok, even if you aren’t.