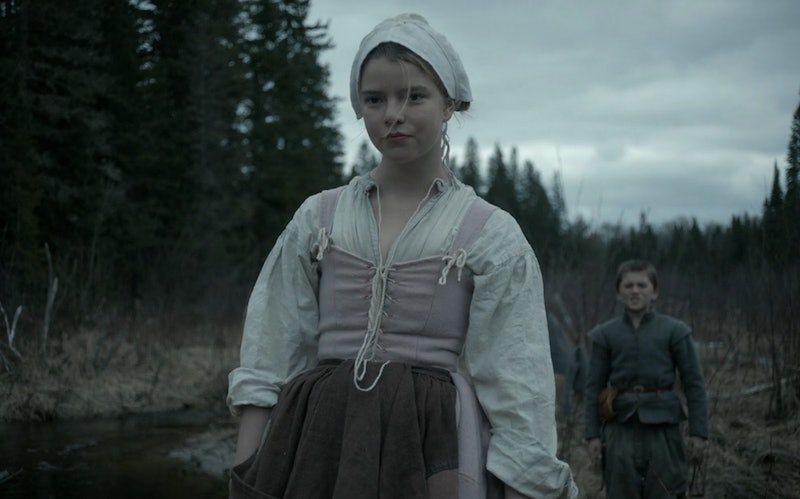 There are a few ways to describe the new movie Midsommar, out July 3: Creepy as hell, disturbingly bright, and "Oh my god, what was that?" are a few, and that's based on the trailer alone. But another way to describe the film is "folk horror," a sub-genre that makes the already sinister elements of some folklore even more scary and gruesome. And if you are looking for movies like Midsommar that are streaming online now, diving into folk horror will get you just that.

Nerdist describes folk horror as "more of a feeling than a series of definite tropes," and explains, "The films often deal with paganism, and they generally have elements of rustic folklore and the occult, but they almost always feature groups of other people — of regular 'folks' — perpetrating the onscreen horrors." Yep, sounds like Midsommar, in which a group of American students visit a remote Swedish commune that is super into sacrifices, fits right in.

Aside from movies that fit nicely into the folk horror sub-genre, there are other films that are similar to Midsommar, whether that's because they're about things not being quite what they seem or because of their generally eerie tone. Here are 11 to check out right now.

The Wicker Man is mentioned in a lot of Midsommar reviews because it's the most well-known folk horror movie. The film is about a police sergeant who is sent to a remote area to look for a missing girl. And when he's there, what does he find? Pagan rituals.

(Vice explains that The Wicker Man, along with Witchfinder General from 1968 andThe Blood on Satan's Claw from 1971 are considered the three movies that define the folk horror sub-genre, but those two films aren't readily available to stream.)

This remake has the same general plot as the original, but with 100% more Nicolas Cage. Also, it is way less respected.

2018's Hereditary is the first feature film from Midsommar director Ari Aster. It's not considered folk horror (it's more supernatural) and it doesn't have the humor of Midsommar, but it is similarly haunting in how it portrays grief and mental health.

Like Midsommar, The Village is about a community that lives away from the rest of society and has peculiar beliefs. Like any M. Night Shyamalan movie, it hinges on a big twist.

Stream it on Netflix. Rent it on YouTube or Amazon for $2.99.

This Netflix Original movie is similar to Midsommar in that it's about friends on a trip to Sweden and a cult, but this group of buddies is on a hiking adventure when they start encountering more and more strange things. And later, yes, a ritual.

Apostle is another Netflix Original, this time about a man attempting to rescue his sister from a religious cult. Also, there's a lot of torture and gore.

Witches really lend themselves to folk horror, especially in a historical context. In the 2015 film, a Puritan family in 1600s New England comes into contact with a witch when she steals the youngest member.

More witches! Everyone who was alive in 1999 when The Blair Witch Project came out has seen the shaky handheld camera footage. But, if you forgot, the movie is about a group of students who go into the woods to make a documentary about a witch and scare themselves more than they expected.

A man and his new girlfriend attend a dinner party at his ex-wife's house and things turn very suspicious and cult-y.

Stream it on Netflix. Rent it on YouTube or Amazon for $1.99.

This 1984 movie is based on a Stephen King short story and is about the children in a town being told to murder all of the adults as a religious ritual.

Deliverance is about four guys who go exploring in Appalachia and have a horrific run-in with some locals. While the movie isn't about any rituals or cults, it does involve two separate groups of people and the "regular folks" committing a crime.

Stream it on Netflix. Rent it on YouTube or Amazon for $2.99.

Whether you've seen Midsommar and want some more folk horror or just want to prepare yourself for the experience, these movies should do the trick.