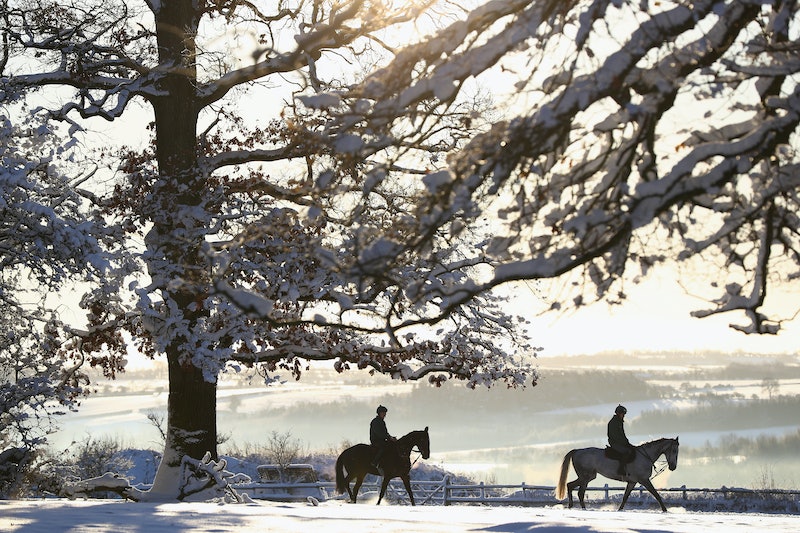 I know that time of year when it feels like the sun starts setting as soon as it rises in the morning is hard to get through. It's already dreary and cold — throwing in a lack of sunlight makes things damn near unbearable. But, chin up: You've only got a few more days before the winter solstice occurs on Thurs., Dec. 21, and then, the days will once again begin to (slowly) get longer. If you're excited about celebrating the big day, you may be planning to share some sort of appropriately ~seasonal~ Instagram post — but, if you're anything like me, you probably have no clue what to make the caption other than a bunch of snowflake emojis. If this is the case, don't worry: here are a few winter solstice Instagram caption ideas that can hopefully get you started. What, you don't plan out your social media ahead of time?

The Gregorian calendar's year is divided into four quadrants dictated by the earth's annual orbit: two solstices and two equinoxes. The vernal (spring) equinox which falls in March, and the autumnal equinox which falls in late September are the two days in the year when night and day are essentially the same length. The summer solstice in late June, however, is the longest day of the year and marks the point when days officially begin to get shorter as winter approaches. On the other hand, the winter solstice in December is the shortest day of the year.

The winter solstice has played a particularly big role in the lives of humans over past centuries, especially within agriculturally-based communities. In a community where winter meant no heat, no light, and little fresh food, the winter solstice — while brutal (is it just me, or does it always feel like the sun is in the sky for about as long as it takes to get through the line at Starbucks?) — meant that the days were officially getting longer. Spring and summer were on the horizon, and they would bring with them sunshine, warmth, and growing season. This reverence for the change in seasons is the basis for many of our modern holiday traditions, including elements of Christmas and Hanukkah.

Wiccans and pagan communities have also celebrated the winter solstice throughout history, which they see as the rebirth of the sun. Their "Yule" practices may be recognizable, particularly to Western celebrants of Christmas. This holiday season, give thanks to the folks responsible for your favorite traditions, like spiced cider and gathering around a big, warm fire: pagans and witches. They knew (and know, still) the right way to do winter.

Saturnalia, celebrated by pagan Roman communities, was another winter solstice blowout. Participants thanked Saturn, the god of agriculture, for making it through another year and asked that the following one be equally fruitful. Edible gifts and carved figurines were exchanged, feasts were had, wine was drunk, and revelers shouted "Io, Saturnalia!" to one another as a festive greeting. If this vibe also sounds familiar, well, that's because early Christians "borrowed" many pagan traditions and incorporated them into their own narrative around the birth of Jesus. The belief that gift-giving originated from the Three Wisemen bringing frankincense, gold. and myrrh? Beautiful story, great sentiment, but unfortunately, that point goes to the ancient Romans.

In the Northern Hemisphere, the winter solstice also serves as the official first day of winter (though, for many of us this season, we've been living this winter lifestyle for weeks). Whether you're ready to buck and brave the cold, or you plan on taking notes from bears and hibernating for the next several months, this list of Instagram captions will let your followers know what's up. Happy solstice-ing!