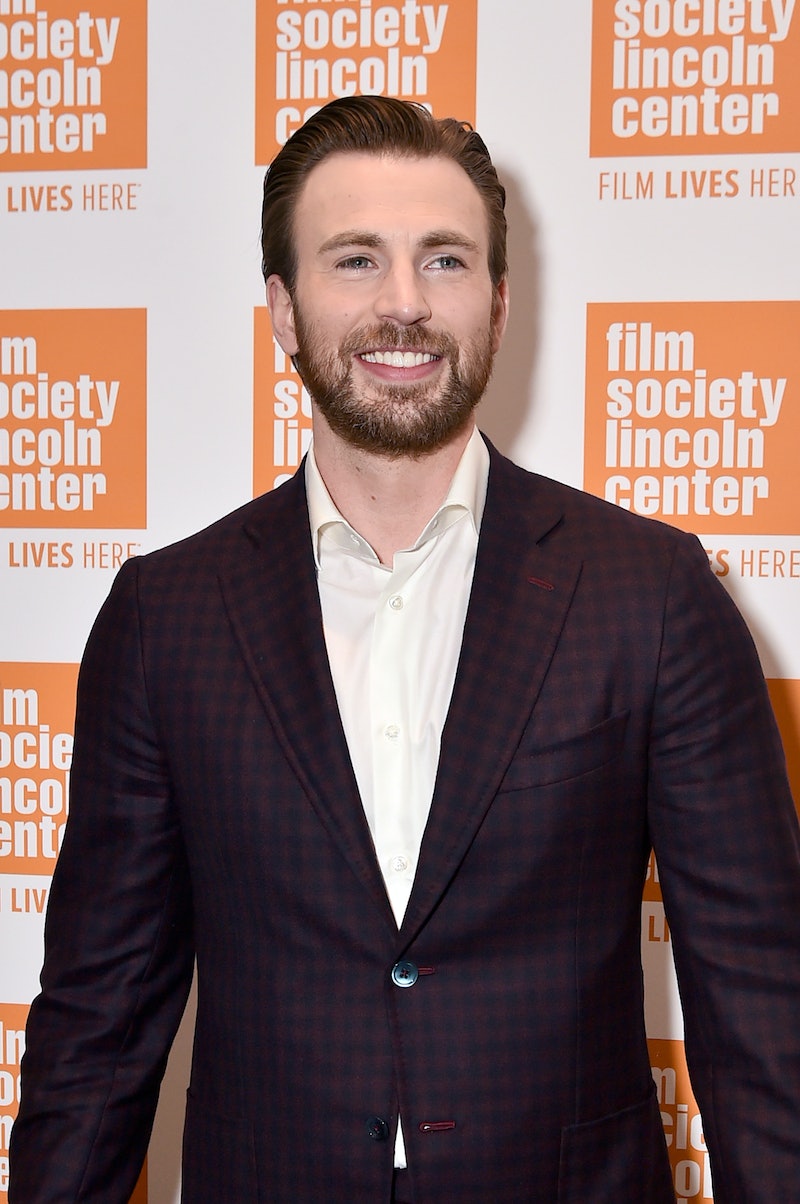 If you've never considered yourself a fan of the man who brings Captain America to life, these Chris Evans quotes about relationships will hopefully change your mind. Did you know that he is the most perfect man to have ever existed and knows exactly how to treat a woman? Yeah, he is basically a real-life romantic superhero showing others how relationships should always be handled — both past, present, and future.

From time to time, the Gifted actor is very candid about fellow celebrities he's dated, in addition to how he views relationships. It's truly refreshing when an actor is open about their personal life and doesn't try to hide how they feel about love. Evans is someone who is ready and willing to be extremely open about those things, depending on the question and situation.

As you'll soon read below, the Marvel star is someone who doesn't take relationships lightly, but ensures that his significant others are happy and treated with respect no matter if they're together or not. How is this real life? Someone like Evans is truly hard to find.

And with that, prepare yourself, because if you aren't already, you are about to fall head over heels for Evans.

1. His Breakups Are Perfect

In a April interview with Elle, Evans revealed that typically his breakups aren't bad. "It's very rare," he said before adding, "But I've had no bad breakups in my life." This speaks volumes about the type of person he is, especially as a partner.

2. He Values All Of His Relationships

Typically, if I see an ex, I give a big hug, and it's wonderful to catch up. If you're ever fortunate enough to love someone and have them love you back, it's worth protecting that. It's rare that someone can truly know you. And if you've broken through that kind of wall, I think it's important to value that.

3. He Compliments His Exes

In March, Evans opened up to People about his past relationship with his Gifted co-star Jenny Slate. "She’s my favorite human." He added, She’s the best." The fact that he can talk about an ex-girlfriend like that is amazing.

4. This Is How He Describes Jenny Slate

He also said the following about Slate:

I’ve never ever ever met someone in my life who has a mastery of the English language the way she does. She’ll give you one sentence and there’s no fat to it. You’re like, "You just chose such an unbelievable collection of words that beautifully articulate what you say."

Wow. Evans you are flawless.

"She’s so vulnerable, so honest, so interested in other people more than herself, she’s incredibly compassionate, there’s just nothing to not love about her," he told People. This just goes to show you that they had a healthy relationship.

6. He's All About Being Open

As a celebrity, Evans doesn't mind talking about his exes, like Slate. As he said, "And you know what, if the things you’re doing and the things you’re surrounding yourself with are quality people and they are beautiful experiences, there’s no shame in sharing."

7. He Wants A Forever Someone

He once told Access Hollywood in 2012 that he wants to spend his life with someone. "It's going to be a long life, you need someone to grow with." Are you swooning yet?

8. This Is What He Looks For In Someone

Evans likes the bare minimum and doesn't find someone attractive based on how much makeup they may or may not be wearing. "I like sneakers, I like ponytails, I like sweatpants," he also told Access Hollywood. "I know a lot of guys say that, but I really mean that … I genuinely enjoy a girl that can wake up and wear no makeup and be OK to step outside and not be worried about what the public thinks."

9. His Definition Of Romance

For Evans, there is so much more to romance. He also doesn't define it like most do. "I consider myself a very romantic guy," the 35-year-old told Entertainment Tonight in September 2015. "I don’t necessarily consider romance to be isolated simply between two people. I'm romantic with my love of music or art or nature. I love things." So his type of romance is all-encompassing. Who else can get on board with that?

Once again while discussing Slate, he told USA Today in April, "You find that you cannot help to have respect for her. You spend five minutes with her and you cannot find something bad to say about her if you tried." Seriously, what a respectful and awesome guy.

11. He Cherishes All Of His Relationships

Based on what Evans also told USA Today about Slate, it sure seems like he cherishes relationships even when they end. "You know, relationships are tricky, there are lot of moving pieces," he said. "But I am endlessly grateful for having met her. She will be in my life always."

Evans understands that you can't build a family on false love. "The family only works if it's built off the extension of the love you feel for a person," he explained to USA Today. "If you all of a sudden want the kid more than you want the relationship, you may be on shaky ground." He absolutely gets it.

Thanks to his mom, Evans is the man he is today. So, everyone should just send her thank you note now. "My mom told me that the best thing you could give a woman was attention," he told Cosmopolitan UK in November 2014. "She said, 'Listen to her instead of trying to impress her.' My mom fought for feminism in her day so instilled in me the importance of equality. She taught me so much about women."

Are you head over heels in love with him yet? Well, you should be.