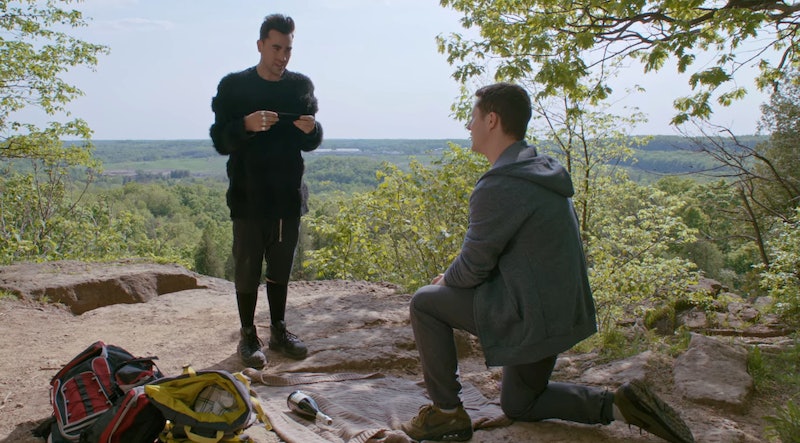 The final season of Schitt's Creek is poised to deliver one of the Rose's biggest life events yet: David and Patrick's wedding. But before they walk down the aisle and emotionally wreck you, you may want to prepare yourself by rewatching all the very sweet moments that made them the couple they are today. If you can get through these without crying, congratulations: your heart is made of stone.

Though it wasn't yet clear how Patrick felt about David when they met, David was definitely a bit flustered, as evidenced by the cringey, incoherent voicemail(s) he left Patrick trying to explain his business plan. Naturally, Patrick playfully mocked him for it — which is exactly what David would have done if the roles were reversed.

After the soft launch (or was it hard?) of Rose Apothecary, David and Patrick celebrated their success with a hug that quite literally made the lights flicker. Sure, it could have been Patrick's poor electrician work, but let's blame it on their electrifying chemistry.

Any couple's first kiss is significant, but what makes David and Patrick's particularly sweet is that David made the first move, and Patrick thanked him for it. "I was getting a little scared that I was going to let you leave here without us having done that, so thank you for making that happen for us," he said, explaining he'd never kissed another man before.

4. The Aftermath of Their First Kiss

Patrick might not have been willing to tell David that he was a "nice person" when Season 4 picked up right where Season 3 ended, but he did say that he finally felt "all the things that you're supposed to feel" during their first kiss. David, too, was experiencing something profound after kissing a person he actually cared about, respected, and thought was nice. "In a way, it's like we're both starting something new," David said.

In the middle of ranting about where things should be "correctly" placed in their store, David slipped and accidentally called Patrick his boyfriend. Patrick again gently mocked him for it, but it led to a lovely moment for the couple.

No best-of list would be complete without Patrick singing "Simply the Best" to David during Rose Apothecary's open mic night. As it turned out, David's worrying that his boyfriend would embarrass him was all for naught.

The couple hit a bump in the road after David learned that Patrick had been in communication with his ex-fiancée, Rachel. To make up for it, Patrick sent David a series of nice gifts — and David put off making up with him so he could keep receiving them. When Patrick found out, he demanded David extend an olive branch to him, too, which led to David performing a lip-sync to Tina Turner's "Simply the Best" for Patrick.

8. David Told Patrick He Loved Him

In helping Alexis and Ted reconnect, David was moved to tell Patrick he loved him with a passionate kiss. He even made the moment perfect by getting Patrick the cup of tea that he wanted... eventually.

9. Patrick Showed His Jealous Side

Patrick got jealous after David and Ted kissed during a game of spin the bottle at his high school-themed housewarming party. Normally, David is the one to give in to his extreme emotions, so it was nice to see the tables turned. Plus, the moment led Patrick to wonder what would have happened if they had met during high school.

10. Patrick Proved He Only Has Eyes For David

After a customer named Ken hit on Patrick, David proposed that he go on a date with him, because Patrick had never been out with another man. He was trying to be generous, but of course, David wasn't really happy about it, so he was immensely pleased when Patrick came to the motel and confessed he never went on the date and didn't want to date anyone else.

That David deigned to play baseball is proof he loves Patrick.

David was immensely supportive of Patrick when he found out that Patrick hadn't come out to his parents yet. The only problem was that David had already invited Patrick's parents to a surprise party... and Johnny had told them that David was in a relationship with Patrick. Patrick was nervous (although he didn't need to be), but he said he would be honest with his parents because, "I owe it to us to tell them. I want them to know."

It's an understatement to say that David is not really the outdoorsy type, but Patrick made their hike worth it by proposing to David. Patrick not only picked out the most David engagement ring(s) possible, but he also told the perpetually self-doubting David it was the easiest decision of his life to ask David to marry him. The only thing that might make you sob harder is their wedding.