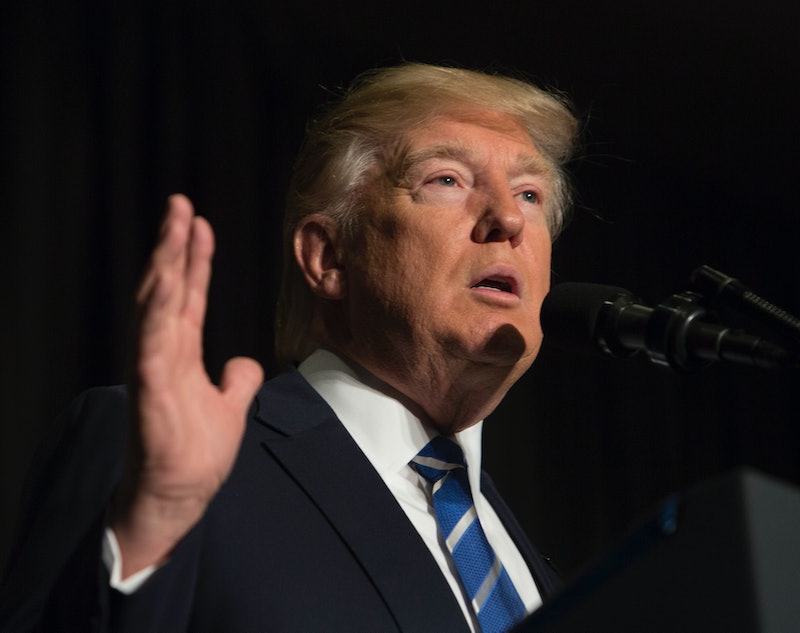 President Trump suffered a major defeat on Thursday as the 9th Circuit Court of Appeals ruled against his travel ban, thus blocking the policy from taking effect nationwide. This was the third consecutive loss for the administration on the travel ban, and for a self-proclaimed winner like Trump, that's got to sting. Make no mistake: Trump was the loser of the day on Thursday, so now is probably a good time to look at some of Trump's quotes about losers. Because he doesn't seem to like them very much.

Trump has called many people, businesses and institutions "losers" over the years, but it's not clear what criteria he uses to bestow that label upon someone. In some instances, he's used it accurately — for instance, when he's applied it to his opponents in the Republican presidential primary. That's undeniable: If you enter a contest and don't win, that makes you a loser.

Other times, though, his calculus is unclear. Why, for instance, does he think that Russell Brand is a loser? Why did call ISIS "losers" at a time when the group had successfully seized control of around one-third of Syria? And why must one be a loser in order to appreciate the comedic stylings of Jon Stewart?

This tweet is from four years ago, but as of this writing, the Huffington Post is alive and well.

"Bad food restaurants." As opposed to all of those restaurants that don't serve food.

In this tweet, Trump makes the novel argument that one can be a loser even if they win.

Contrary to Trump's prediction, Chuck Todd is still the host of Meet the Press.

The opposite isn't true, however, as Trump demonstrated on Thursday that it's possible to be a loser even if you do have an ego. Also, Trump has tweeted this quote, which is from himself, on four separate occasions.

John Kasich won the Ohio primary, then reportedly turned down Trump's request to be his running mate. Sad! But Trump's campaign communications adviser at the time, Jason Miller, said the claim was "completely ridiculous" and denied allegations that Trump had offered Kasich the position.

Say what you want about the Islamic State, but it's a stretch to call a group that controls this much territory in Syria "losers." Bad guys? Yes. Losers? Not yet. If the world dismisses ISIS as a "loser," it might not take the threat it poses as seriously. And that could be dangerous.

One can only imagine the vitriol Stewart would have received from Trump's Twitter if he'd still be hosting The Daily Show during the 2016 campaign.

This tweet was half-right: Cruz did indeed lose the Republican nomination. But Trump never had a "good chance" to win the Texas primary.

Trump has called Russell Brand a loser on several occasions, and it's still completely unclear why.

People Who Don't React Well To Twists Of Fate

Well, in all fairness, Trump was right about this one.

If one thing's certain right now, it's that Trump is not pleased with his loss in the 9th Circuit Court of Appeals on Thursday. Don't expect him to consider himself a loser, though.