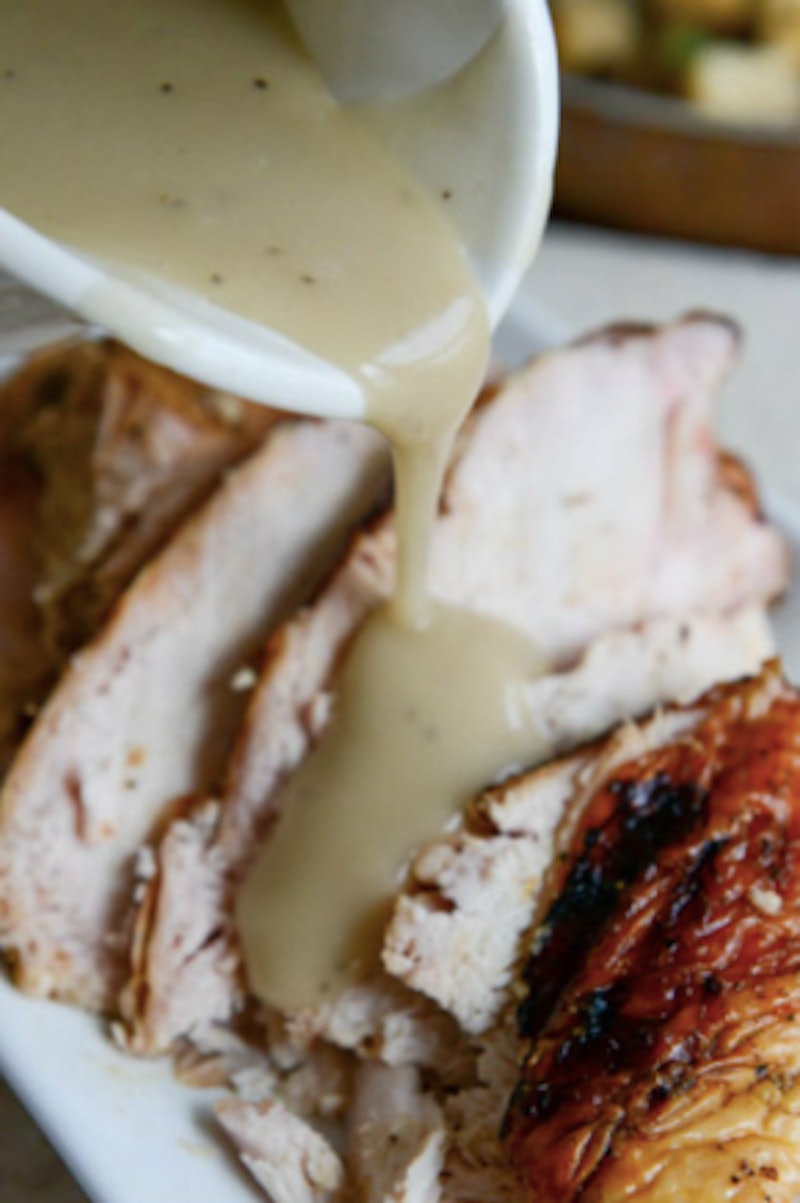 There are few things that take the delicious out of a Thanksgiving dinner more than a dry turkey. I know you've been there — ready to dig into that beautiful bird, the one you waited for all year long, utensils in hand and ready to pounce the minute your serving is plated and in front of you... only to discover once you've cut into the turkey that it's dry and tasteless. Your heart drops, the chef is humiliated, and the whole meal devolves into an event that absolutely no one is thankful for. Enter gravy, a glorious invention that can save even the most dehydrated of turkey dinners. In anticipation of potential meal mishaps, check out these 13 easy gravy recipes for Thanksgiving 2017.

Like many other Americans, I was raised on a single kind of gravy — The Family Recipe. I love that gravy, but what I discovered in assembling recipes for this story is that there's more than one way to dress your Thanksgiving meal, and that there are actually some pretty unique takes out there, ripe for tasting. I'd happily pour any of these over even the moistest helpings of turkey, because they look so darn good. Actually, I'd eat most of them with a spoon. (And don't you dare say you've never thought about eating gravy with a spoon.)

Every mom, aunt, grandma, etc. across America claims that her Thanksgiving gravy recipe is the only one worth eating, but Mom On Time Out bills her variation as "The Best Turkey Gravy Recipe." You won't know if she's overpromising until you try it out yourself!

Making giblet gravy is somewhat of an ambitious undertaking, since it requires you to really get into it with parts of the turkey that would often be the first things you'd toss in the trash. Giblet gravy is, however, a total classic, so check out all the detail on The Kitchn if you're up for the challenge.

I'll pause for effect here, because the name of this recipe alone may very well have blown your mind. According to How Sweet Eats, this gravy doesn't have an overly bourbon-y flavor, but it does give you a sweeter, smokier take on traditional Thanksgiving sauce.

Sticking to a paleo diet? Take gravy off the list of foods you'll need to avoid this Thanksgiving, thanks to this simple recipe for paleo-friendly herb gravy from Nom Nom Paleo.

A little bacon is good for the soul in any form, and it features prominently in this recipe from How Sweet Eats. The gravy gets additional flavor from caramelized shallots. Hello, lovely.

Just the word "umami" makes me feel like a legitimate foodie, and I can only imagine how fancy Thanksgiving would feel with a dish of this umami-style gravy on the table. This recipe from Nom Nom Paleo gets its unique flavor from a combination of savory bone broth, tomato paste, dried and fresh mushroom, and fish sauce.

This rich mushroom gravy from Natasha's Kitchen takes just 30 minutes to make, so it's the perfect solution if you find yourself an hour away from Thanksgiving dinner with no gravy ready to serve.

Cheesy gravy is an entirely new concept for me, but now that I've seen the light, I can't wait to try it out. Closet Cooking's recipe for a simple chicken broth loaded up with asiago cheese sounds like it should be a winner no matter what you pour it over.

Many Thanksgiving gravy recipes require regular flour for thickening, so if you have gluten sensitivities, consider whipping up this version from Gluten Free On A Shoestring instead. It uses xantham gum and turkey pan drippings to achieve that perfect texture you wait for all year.

Check out this Southern-style recipe from The Kitchn for everything you need to know about making this indulgent sauce, which will be just as at home on the brunch table as the Thanksgiving table.

Vegans, Oh She Glows has your back (as always). This unique Chickpea Miso Gravy will taste great on all of the non-turkey dishes you indulge in on Thanksgiving 2017.

This Apple Cider Gravy from A Spicy Perspective is just the right mix of sweet and savory and will be a great complement to anything else you have in your Thanksgiving spread.

Closet Cooking pairs this unique gravy recipe with one for cheddar biscuits, but it could also add a seriously fun twist to your Thanksgiving dinner, either poured over your turkey or used as a dipping sauce for cornbread.

More like this
Dunkin’s Valentine’s Day Lineup Includes A Drink That Tastes Like Dessert
By Alexis Morillo
12 Aphrodisiac Desserts To Spice Up Your Valentine’s Day
By Kaitlyn Wylde
15 Black-Owned Liquor & Wine Brands To Add To Your Bar Cart
By Alexis Morillo
23 Super Sweet Things To Write In A Valentine's Day Card
By Karen Belz and Lexi Inks
Get Even More From Bustle — Sign Up For The Newsletter
From hair trends to relationship advice, our daily newsletter has everything you need to sound like a person who’s on TikTok, even if you aren’t.