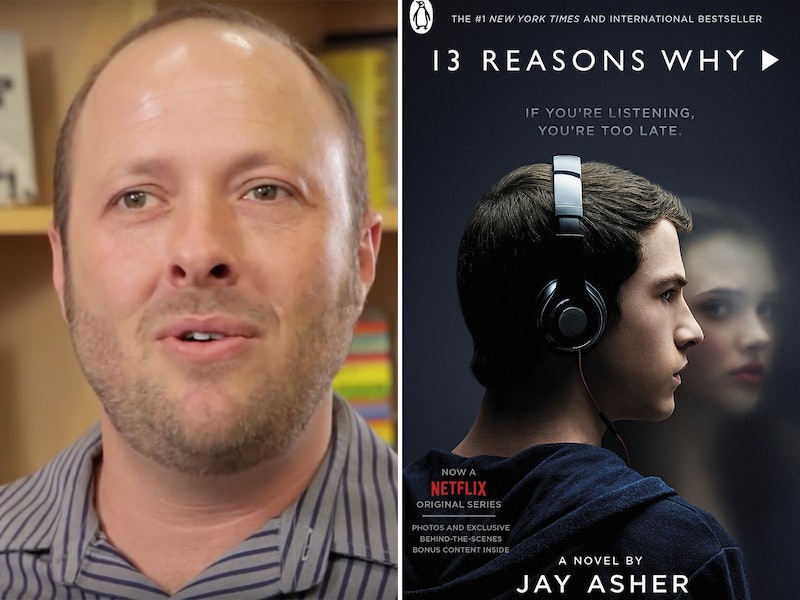 Bustle reached out to Asher and the SCBWI for comment, but had not received a response as of publication time.

In April 2017, Mr. Asher voluntarily agreed that he would no longer attend SCBWI conferences. This was in response to many years of harassment from a group of authors with whom he had consensual relationships that ended with some hurt feelings when they learned about each other.

Mr. Asher was not banned by the SCBWI. He is currently a member in good standing. In fact, when he let his membership in the group lapse last summer, Lin Oliver, the group’s executive director, suggested that he keep his membership going. He did as requested, and Mr. Asher’s membership is active today.

There was no allegation, investigation or finding of sexual harassment. These women were not subordinates of Mr. Asher; they were his peers and they each entered into romantic relationships with him voluntarily, with some initially pursuing him.

Mr. Asher was married at the time of these relationships, as were many of the women. He is deeply sorry for the pain these consensual decisions caused his family, and others.

The false statements to the news media have resulted in inaccurate and hurtful news coverage, which is threatening Mr. Asher’s livelihood. Mr. Asher has retained legal counsel and will take whatever steps necessary to set the record straight."

Like many other industries, the publishing world has been pushed to confront issues of sexual harassment and assault in recent months. In January, School Library Journal published an article detailing sexual harassment allegations against several prominent people in children's publishing. Over the weekend, anonymous users took to the comments section of that article to call out several other authors not named in the article, including Jay Asher. Users also criticized the SCBWI for their supposed support of the author, which prompted Lin Oliver, the organization's executive director, to address the issue.

In a personal response in the comment section of the SLJ article, Oliver asked readers to “Please understand that SCBWI can only take action on what has been reported." She continued: "Two men have been reported — David Diaz and Jay Asher. Both have been expelled from the SCBWI and are not welcome as members, faculty or speakers … There is a zero tolerance policy for harassment, there is a preponderance [of] powerful and respected women on our board, on our staff, and in our membership.”

Asher, however, disputes the sexual harassment allegations and maintains that he was not expelled from SCBWI. In an interview with Buzzfeed News, he said that he made choice to leave the organization on his own after discovering that an anonymous complaint had been made against him and sent to Oliver.

“It's very scary when you know people are just not going to believe you once you open your mouth,” Asher told BuzzFeed News. “I feel very conflicted about it just because of what's going on in the culture and who's supposed to be believed and who's not.”

In her explanation of the events to Buzzfeed, Oliver said that SCBWI investigated the allegations leveled against Asher, and concluded that it was necessary to expel him from the organization. “We have always been really sensitive to sexual harassment issues and have a zero tolerance policy," Oliver told BuzzFeed News, "but clearly our policies haven’t prevented violations, so we’re taking this opportunity to take another look at our guidelines.”

SCBWI is a nonprofit organization that offers children's and young adult book writers and illustrators a variety of important professional resources, including education, training, and financial awards. It is the place many young, aspiring writers turn to for guidance and, in light of the recent news, a place where many of them are taken advantage of.

This is not the first time the book world, or SCBWI specifically, has had to address allegations of sexual harassment and assault. In December 2017, illustrator David Díaz stepped down from his position on SCBWI's board amid sexual harassment allegations. That same month, Giuseppe Castellano, executive art director of Penguin Workshop, Penguin Random House’s imprint for children’s books, resigned after actress Charlyne Yi alleged he sexual harassed her.

Over the course of his career, Asher has often spoken publicly about sexual violence. His book-turned-Netflix hit 13 Reasons Why details a young high school student's suicide in the wake of sexual harassment and assault, and just last week, the author took to Twitter to thank Speak author Laurie Halse Anderson for her contribution to children's literature. In his comments to Buzzfeed, Asher vehemently denied the claims being leveled against him now. “The truth is that I had been harassed by these people for close to 10 years," he said.

Oliver believes that, in light of these new allegations, SCBWI has the opportunity to improve their organization's code of conduct and reporting systems. “Every single industry in America, including children’s books, is made up of primarily excellent people with excellent values and exemplary moral codes,” Oliver told Buzzfeed. “But no industry is exempt from taking a look at themselves and seeing what they can do better.”

More like this
10 Organizations To Support On Latinx Women's Equal Pay Day
By Caroline Burke and Mia Mercado
MOBO Awards Found Kanya King On The Woman Whose Grit & Determination Spur Her On
By Kanya King
The 'Firefly Lane' Book Ending Teases Way More Tears To Come In 2023
By K.W. Colyard
Allie Rowbottom Will Have Her Feminism With A Side of Botox
By Samantha Leach
Get Even More From Bustle — Sign Up For The Newsletter