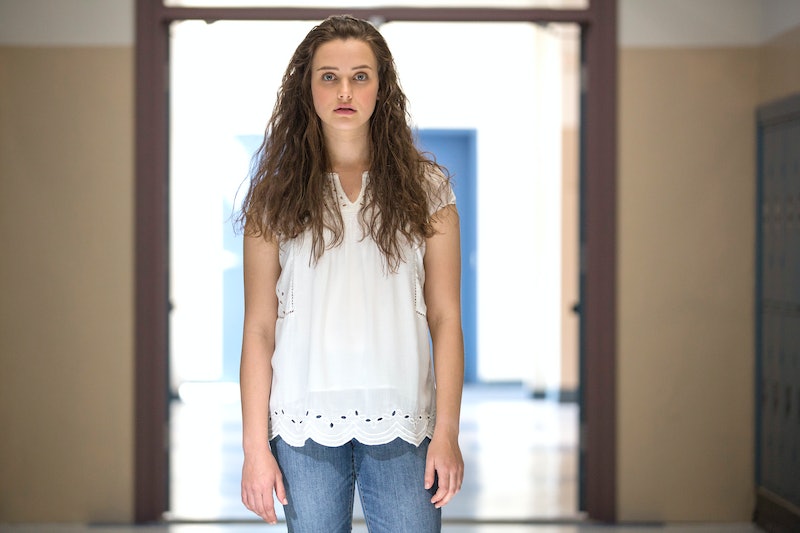 There's no denying that one Netflix show in particular started a lot of conversations upon its release last year. And just as many critics suspected, it seems that 13 Reasons Why is indeed affecting teen behavior — just not in the way that so many had feared. According to a newly-released study commissioned by Netflix through Northwestern University’s Center on Media and Human Development, the difficult and often abusive situations depicted on the controversial series actually sparked feelings more akin to empathy than helplessness in many who viewed it. And for those who are having adverse responses to the vivid depictions, the feedback from the study has led Netflix to address concerns in 13 Reasons Why Season 2.

The Hollywood Reporter revealed that episodes will now begin with an introductory video in which cast members drop their characters to issue a real-life content warning and tell viewers how to get help if they need it. The video will feature show stars Katherine Langford, who plays Hannah, Dylan Minnette, who plays Clay, Justin Prentice, who plays Bryce, and Alisha Boe, who plays Jessica.

At the end of the video, a link for 13ReasonsWhy.Info will appear, which audiences can follow to a site housing mental health resources including a discussion guide created in collaboration with the American Foundation for Suicide Prevention that teens can download straight to their computer. Netflix will also add an aftershow for the second season, titled Beyond the Reasons, which gives viewers a forum to continue processing what they've just seen. It will reportedly include cast members, experts, and producers furthering the conversation about the most difficult episodes, scenes, and topics.

Those are the ways in which Netflix executives are addressing a need set out by 13 Reasons Why critics. But there are also ways in which the study suggests that the show is serving an unmet need itself.

A majority of the teens surveyed reported positive changes after observing Hannah Baker and Clay Jensen's relationship, like the 78 percent who found a greater awareness of their actions' effects on others or the 73 percent who came away with increased consideration of their peers. Around half took initiative on their own to look for more information on some of the difficult topics covered in 13 Reasons Why that went beyond self-harm, like sexual assault, slut-shaming, depression, and bullying. And 51 percent were even inspired to reach out to someone they may have bullied in the past.

In short, the show might have actually increased visibility for those struggling in their own communities, instead of isolating them further. Two prime examples are 19-year-old Riley and 24-year-old Louise, who were inspired by 13 Reasons Why to speak up about their own real-life issues, issues that people don't often talk about. Riley was in an abusive relationship in high school, and Louise is a survivor of sexual assault; both related to Hannah, finding courage in her story to speak out.

The show is starting an important conversation, and its popularity led to early concern from critics. Many understandably worried that the vivid depiction of Hannah's death in one episode was a romanticized portrayal of suicide. As the Washington Post reported in April 2017, due to the fact that suicide often involves mental illness and can't be pinned on one root cause, many experts urge against "describing a suicide in graphic detail." However, the show did that in spades, so it's easy to understand why so many were upset.

The organization Suicide Awareness Voices of Education (SAVE) has been one of the loudest voices scolding Netflix for their decision to include Hannah's death scene. Their executive director Dan Reidenberg told WaPo, "Young people are not that great at separating fiction from reality," adding, "That gets even harder to do when you’re struggling with thoughts." But, true as that may be, it's actually the same rationale that the show's creator Nic Sheff used to explain including the scene.

According to Sheff, when he'd made his own suicide attempt as a young man, the thing that stopped him was imagining the pain and suffering that it would cause him, through the lens of a female peer who had ended her own life:

"It was an instant reminder that suicide is never peaceful and painless, but instead an excruciating, violent end to all hopes and dreams and possibilities for the future. The memory came to me like a shock. It staggered me. And it saved my life."

He wanted to find a way to bring that same reminder to kids who maybe had romanticized the idea of suicide and self-harm in their minds. His rationale appears to be that if it's difficult to watch or to imagine, it should make it even more difficult to do.

Certainly there will be people triggered by the depictions of self-harm in 13 Reasons Why, but the positive elements laid out in the Northwestern study seem to indicate that, for now, the show does more good for viewers than harm. And with the precautions that Netflix is taking going into Season 2, that should continue to be true.

More like this
Maxim Baldry Plays This Pivotal Role In 'The Lord Of The Rings' Universe
By Maxine Harrison
Nicola Coughlan Shared A Lady Whistledown Excerpt From ‘Bridgerton’ Season 3
By Grace Wehniainen, Alyssa Lapid and Sam Ramsden
Devi Is Going To Meet A “Smoldering Bad Boy” In ‘Never Have I Ever’ Season 4
By Jack Irvin and Gabrielle Bondi
New ‘Lupin’ Part 3 Teaser Hints That Assane Will “Go Out In Style”
By Brad Witter
Get Even More From Bustle — Sign Up For The Newsletter